Tens of thousands of supporters of a Belarusian opposition candidate crowded into a Minsk square on Thursday evening before upcoming elections for what may have been the largest political rally in the country’s modern history.

More than 63,000 people attended the event, according to the human rights organisation Viasna, which has sent monitors to the opposition protests. That number would mark it as the “largest in Belarus since 1991”, according to Charter97, a prominent opposition website.

More conservative estimates of the number in attendance would still make the rally in Minsk’s Bangalore Square one of the country’s largest since the Soviet Union.

Supporters came bearing both the Belarusian state flag and the white-red-white flag favoured by the country’s opposition. Others had signs calling for the release of political prisoners or demanding change. As night fell, protestors sang a protest anthem about walls crumbling, a translation of the 1980s song adopted by the Polish Solidarity movement.

The rallies are in support of Svetlana Tikhanovskaya, a reluctant presidential candidate thrust into the race after her husband was arrested, and backed by other opposition candidates disqualified from the 9 August elections.

She is challenging Alexander Lukashenko, the country’s president since 1994, who has jailed key opposition leaders and accused Russia and the west of seeking to destabilise the country by supporting his opponents. 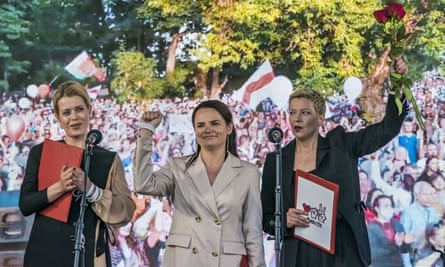 Lukashenko is expected to win the elections, particularly as he exerts immense influence on elections officials. Most independent polling is illegal in Belarus, although a poll ordered by Belarusian state television has projected Lukashenko to win in a landslide.

Thursday’s historic rally came as the Belarus government said it had arrested 33 Russian mercenaries sent to destabilise the country and would impose extra precautions on public rallies, a measure that appeared designed to target Tikhanovskaya’s campaign.

The pro-Tikhanovskaya rallies have grown steadily through a week of campaigning in cities and towns across the country, setting up one of the most unpredictable presidential elections in Belarus. She has been joined onstage by two key female allies, a striking image in the normally male-dominated politics in Belarus.

Lower estimates would still put the rally on the level of mass protests in 2010, when tens of thousands gathered to protest disputed elections to re-elect Lukashenko. More than 600 were detained afterwards in a brutal crackdown that led the EU and US to sanction Lukashenko.

Smaller rallies took place after presidential elections in 2006 and as recently as 2017. In both cases, hundreds were arrested.

Supporters came bearing both the white-red-white Belarusian flag favoured by the country’s opposition and the official red-and-green state flag, an indication of how the opposition to Lukashenko has expanded even among his base.