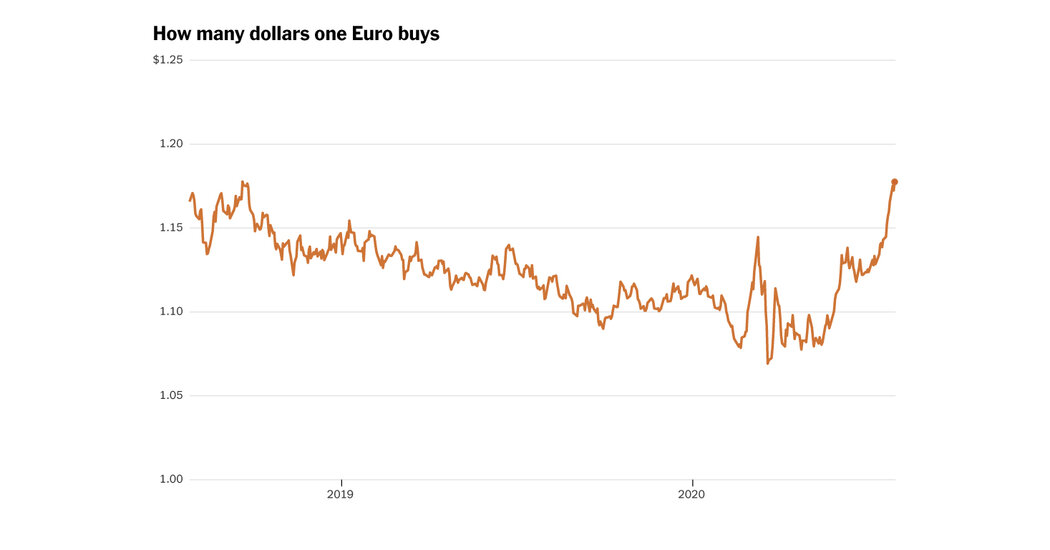 At the end of June, the research arm of the world’s largest asset manager upgraded its view on European equities to overweight, from underweight, recommending that investors buy more of these stocks. “It’s been a very long time,” said Mr. Thiel, the institute’s chief fixed income strategist.

Europe has a bad rep with investors. For years, asset managers and bank strategists have characterized the region by its anemic growth rate and shaky political union, and steered investors away. Now, a crisis has turned into an unlikely investment opportunity as the region appears to have handled the pandemic better than some other parts of the world. In the past few months, European assets have staged a comeback.

The euro rose to its highest level in more than two years against the U.S. dollar this week, and the region’s benchmark index, the Stoxx 600, is set for a second straight month of gains greater than those of the S&P 500 index, in dollar terms, according to data from FactSet.

The most important reason for this upswing, analysts say, is that Europe is recording far fewer new cases of coronavirus. There are still occasional spikes in Europe, and some early signs that the infection rate is starting to level off in the United States. But there are about 65,000 new cases each day in the United States, compared with fewer than 10,000 new cases across the Atlantic.

The next reason is politics. When European leaders reached an agreement last week on a 750 billion euro ($888 billion) recovery fund, it wasn’t the size of the deal that impressed investors, but the fact that it happened after four long nights of negotiations. The decision to raise money collectively and give grants to the countries hit hardest by the pandemic was a message that there is some political will left to further the project that created the euro two decades ago. European unity could still be found in an emergency, despite fraying on the edges caused by the exit of Britain from the European Union, budget fights with Italy, and concerns about the dismantling of democracy in Hungary.

“The E.U. recovery fund is a gigantic step forward for Europe,” Mr. Thiel said. “The E.U. has always been an organization that has reacted in times of crises. That’s how they move forward.” This week, the euro climbed to more than $1.18, the highest since June 2018, as demand for the currency and other European assets increased amid expectations that normal economic activity would resume more quickly in the region.

The euro has gained more than 5 percent against the dollar so far this year, according to FactSet data. One way to predict whether this trend will continue is to look at the positions taken by speculative traders — those who seek to make money from short-term market moves — rather than longer-term investors, such as hedge funds.

At the moment, there are far more bets that the euro will rise than bets that the currency will depreciate. This net long position, as it is called, is the largest it has been in more than two years, according to data from the Commodity Futures Trading Commission. As recently as March, traders’ bets that the euro would decline outnumbered those expecting an appreciation.

The recovery fund and expectations of closer fiscal integration should be “a long-term positive” for the euro, Valentin Marinov, a currency strategist at Crédit Agricole, said.

Money from overseas is flowing into exchange-traded funds that buy European stocks, and there are signs that European investors are returning to their home markets and selling dollar-denominated assets, which is strengthening the euro, Mr. Marinov added.

It’s a welcome change for Marcus Morris-Eyton, an asset manager at Allianz Global Investors. “Frustratingly for us, Europe has underperformed for quite a number of years now,” he said. Investors have generally shied away from European stocks, while buying U.S. shares. “That has shown tentative signs of reversing in the last couple of months,” Mr. Morris-Eyton said.

Since late May, Europe’s stock market has recorded stronger gains than the S&P 500 index, after taking the strength of the euro into account.

But over a longer time period, European markets still have a lot of catching up to do. Year to date, the S&P 500 is slightly positive, whereas the Stoxx 600 is down 13.5 percent when calculated in euros, and more than 7 percent in U.S. dollars.

While investors are starting to take advantage of the relative cheapness of European equities, a sustained recovery in either stock market will depend on consumer and business confidence returning, which would in turn stir economic activity. After record-breaking slumps in American and German G.D.P. in the second quarter, economists are watching more recent indicators to see how quickly a recovery might take hold. Even though consumer confidence fell again in July, after rebounding the previous month, in both the euro area and the United States, early signs still favor Europe, several analysts said.

“The U.S., and a number of Asian investors, have turned their eyes toward Europe,” said Sheila Patel, chairman of Goldman Sachs Asset Management. Europe has “been able to deal with the early stages of the crisis and now seems to be containing outbreaks more readily.”

That said, new coronavirus outbreaks are still emerging and raising anxiety about a second pandemic wave in Europe. The number of new cases in Spain led the British government last weekend to suddenly put the country and its surrounding islands back on a quarantine list, even catching off guard a government minister on holiday there. And Germany recorded more than 3,000 new cases in the past week.

This has the potential to undo Europe’s nascent gains. “Public health isn’t just about throwing money at a problem,” Ms. Patel said.