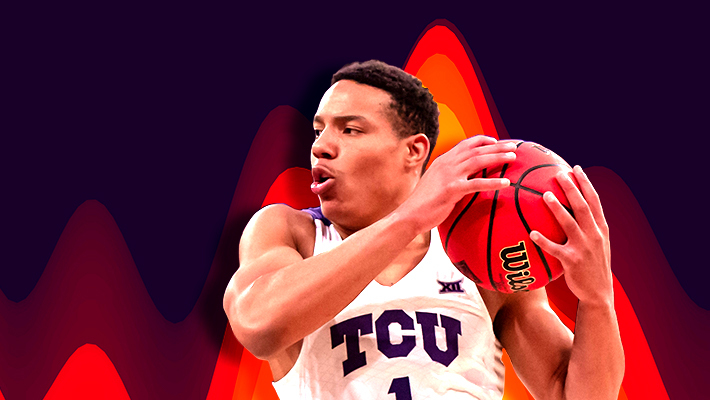 Former TCU guard Desmond Bane is a top-20 prospect in this class and one that hardly receives such recognition from mainstream consensus. Whether that’s a product of NBA front offices stealthily posturing to snag him as a value pick in the second round or simply a blind spot in evaluation is unknown. Regardless, him sitting outside the top-30 on both ESPN’s and The Athletic‘s mock drafts, which incorporate intel from the league, suggests he’s a hidden commodity who’s going to provide surplus return on investment.

Across four seasons at TCU, Bane, the best shooter in the draft, nailed 43.3 percent of his 575 three-pointers and netted 80.4 percent of his free throws. This past season, he converted 44.2 percent of his 208 triples, showcasing shot diversity with deep pull-ups/spot-ups, off-balance jumpers, and well-contested looks, and was adept seamlessly decelerating from full sprint to shot.

His versatility allows for the option to slot him on or off the ball and affords teams lineup flexibility. He’s not solely boxed into an off-ball role, having developed and flashed a solid handle in recent years. But given the fact he’s slated to be a second-round pick, it’s unlikely any team entrusts him with significant on-ball reps, at least early on in his career.

This doesn’t mean he shouldn’t command usage or is unworthy of scheming any actions around his talents. Outside of the raw volume and efficiency beyond the arc, Bane is the top shooter in this class because of his off-ball craft. He’s a master of reading and manipulating screens to create space — cognizant of when to curl or flare — utilizing hesitations, constant changes of pace, subtle push-offs, and navigating via tight angles around picks. Watch Bane for a possession while he operates off of the ball and he’s likely to exhaust you as you aim to track his unrelenting movement.

Once the 22-year-old does spring free, his concise shot preparation, underscored by streamlined footwork and an easygoing release, render him a proficient off-movement shooter. As a senior, he ranked in the 62nd percentile off screens, which, honestly, might undersell his off-movement ability and NBA potential.

Beyond scripted sets, Bane regularly displays heady instincts as a relocation shooter and off-ball maestro. Whether it’s filling to an empty corner following a drive-and-kick sequence, simply drifting around the perimeter to simplify passing windows, or migrating from inside the arc to behind the arc when he spots an opening, he consistently generates shots to maintain value without the ball in his hands. It’s not just looks for himself, either. Bane can launch after a relocation or attack to create for others if the closeout eliminates his own shot attempt.

This is the type of stuff that makes high-level off-ball scorers so valuable. Bane manufactures advantages without blazing speed or overwhelming length in an on-ball role. He wields a certain amount of guile and intelligence that is rare to find in secondary wings. The effect of his elite shooting gravity is amplified when paired with such IQ and awareness. Off-ball creation is a legitimate concept and trait, one through which Bane excels. Assists can belie how a sequence played out; at times the assisted player labored to get open or enabled an easy pass to happen, a frequent occurrence in Bane’s scoring toolkit. He is someone who will tilt defenses in distinct ways to simplify offense for himself or others and serve as a means of efficient possessions when actions cater toward his elite skills.

Bane doesn’t mandate deployment solely via off-ball responsibilities. He boasts genuine aptitude as a complementary initiator, owning the handling chops to facilitate possessions through when an offensive engine is resting or being utilized in other fashions. As a pull-up shooter, he ranked in the 92nd percentile this past year and was in the 76th percentile in pick-and-rolls (85th percentile including passes). He’ll trigger step-backs or gumption-laden pull-ups; skip passes to the left corner and lofting it inside to the roller are his forte, though he’s capable of hitting the right corner on occasion as well.

Despite poor burst and body flexibility as a driver and standstill creator — at this stage, he just can’t turn the corner in half-court settings often enough — Bane bends defenses and manufactures space using hesitations, jab-steps and other crafty footwork maneuvers. He marches to his own rhythm in ball-screen actions and occupies important spots on the floor that command the attention of help defenders. From there, he can leverage that gravity into live dribble skip passes and feeds to the roller or saunter into step-back jumpers. Some of the kick-outs seem like learned reads and he has a tendency to miss weak-side shooters in the right corner, but he’s someone teams should portion on-ball opportunities for from time to time.

What restricts him from being a high-level initiator, outside of the aforementioned lack of explosiveness, is his proclivity for ending his dribble when the primary or secondary option is unavailable. Far too often, Bane will not have the roller or weak-side shooter available and he’ll pick up his dribble, pivoting around for a release valve, stalling possessions or turning it over. Pair that with ball-handling that needs improvement to be a functional weapon for consistent advantage creation and he projects best as a complementary guard who toggles on and off the ball, primarily deriving value from his versatile shooting.

The intelligence, awareness, and constant motion that define much of Bane’s offensive skill package translates to his defense as well. He’s at his best off the ball, rotating to help deter drives or draw charges and contesting shots at the rim or on the perimeter. Off-ball positioning is one of his greatest defensive strengths. He readies himself to play between two shooters on the weak-side, stunts to dissuade big men from hoisting on pick-and-pops, shifts down to the interior as a helper, and promptly recovers back to his own man after completing team defense responsibilities, all of which are habits that contribute to his 2.5 percent steal rate from the past season.

Whether it be losing shooters or cutters, ball-watching lapses surface a bit more frequently than you’d like. But IQ and an active motor coalesce to yield a positively impactful defender. His functional strength and 6’6 frame also permit him to play up at times, and he’s held his own defending post-ups against switches. While he lacks the lateral agility to contain a quicker, twitchier ball-handler, he applies his strength well to close down driving lanes. Considering he’s unlikely to act as anyone’s primary on-ball guard stopper, Bane should fare well versus his assignments and ensure he’s not someone to be exploited or who lesser talents find success against.

For any team, its offensive vision and success commences with a centerpiece. Every franchise, regardless of how creative and ingenious a scheme is, needs a primary initiator. The Dallas Mavericks have Luka Doncic. The Houston Rockets have James Harden. The Los Angeles Lakers have LeBron James. Elite offense stems from an on-ball creator who lays the foundation and shapes the personnel around him.

But there are a finite amount of guys who deserve such gaudy usage as a lead ball-handler. You need supplementary players whose value rests in their ability to thrive without the ball or in quick decision-making scenarios and how well they elevate the cornerstone pieces. Kyle Lowry has helped keep the Toronto Raptors humming for years because of how he excels in this role. Khris Middleton is in the midst of a career season with the Milwaukee Bucks because of his fit next to Giannis Antetokounmpo.

While not in the same tier as those off-ball stars, Bane resembles a similar mold. He’s a technician reading picks and toying with defenders to get open, is an elite off-movement shooter, and has textbook footwork, with that last skill serving as arguably the nucleus of this long-range prowess. Advantage creation is traditionally associated with what you do with the ball in your hands, and justifiably so. But Bane, with his screen manipulation, threatens opponents as an off-ball scorer and forces team defense rotations he can capitalize upon, whether it be as a scorer or facilitator.

As a secondary handler, he’ll deliver equity in pick-and-rolls, beating drop coverage with pull-up jumpers and spraying passes to shooters or rollers when saddled with on-ball possessions. His defensive competence, particularly off the ball, means he’ll be playable in high-leverage postseason games; his functional strength reduces the likelihood of teams finding success if they target him on the ball.

Desmond Bane checks an assortment of important boxes for a complementary guard and his skill-set is conducive to impactful basketball. It remains confusing why he hasn’t entered the first-round conversation. He’s a top-20 prospect who will seemingly last until the second round and might deliver lottery value in this class. A clever, versatile shooter with tertiary distributing tools and defensive faculty, Bane feels like a confident bet to outplay his draft slot. There is no reason he shouldn’t mandate a top-30 pick.