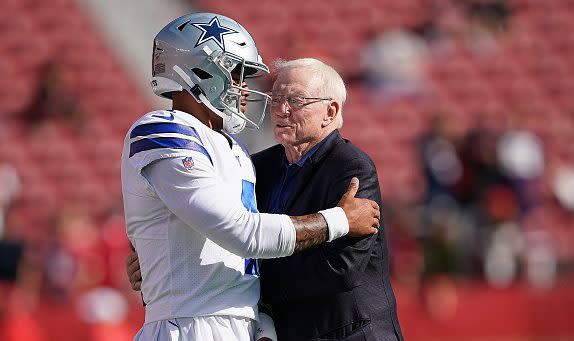 After not coming to terms with the Cowboys on a long-term deal before the July 15 deadline, Dak Prescott told Jori Epstein of USA Today: “I’m a Cowboy and couldn’t be happier.”

He surely would have been happier with a long-term deal.

But neither side seems to be harboring animosity.

“We had a great visit with him at the deadline,” Cowboys executive vice president Stephen Jones told the team website. “We pushed to try to have a few more changes here and there to see if we could get it done. But he’s got such a great outlook on the Dallas Cowboys, our football team, and he’s ready to go out and win a Super Bowl, which would only create more value for him, more value for the Cowboys.

“So we’re fired up about it and still have nothing but 100 percent belief in Dak and his future with the Cowboys, and that we can ultimately get a deal done. He’s special. As Jerry [Jones] and I have said, we are 110 percent behind him, and ultimately feel like we’ll get this done.”

The sides talked the day of the deadline but couldn’t make a deal happen. It’s one of the few times in Jerry Jones’ ownership of the Cowboys that the team didn’t get a contract worked out when it really wanted to work out a contract.

The Prescott camp decided the Cowboys’ five-year offer contained a percentage of guaranteed money too low for a five-year deal. The quarterback’s negotiators wanted a four-year deal.

“I don’t want to use ‘close’ in terms of negotiations. You either get a deal done or you don’t,” Stephen Jones said. “We didn’t quite get it done. I wouldn’t put blame on either side. It’s just one of those things when you’re talking about a deal as big as this is ­– for our team, not just for Dak but our entire team, the ramifications that it has – we certainly want to get it done right. I know he’s respectful of Jerry and myself of what we’re trying to get accomplished, just as we are with him.”

Jones cited the COVID-19 pandemic and the uncertainty of the financial landscape.

In any event, Prescott will play this season under the franchise tender of $31.4 million. The sides can revisit a long-term deal after the season, but it will cost the Cowboys $37.68 million to tag him in 2021 if they can’t get it done.

“Certainly, we’ve got nothing but respect for Dak and his representation in terms of what they’re trying to get out of the deal,” Jones said. “They certainly want a shorter deal. Historically we have, as management, wanted longer deals because it’s more cap friendly and we’re able to spread some things out and keep some players. At the end of the day, and Dak understands this, that’s what we’re trying to do.”