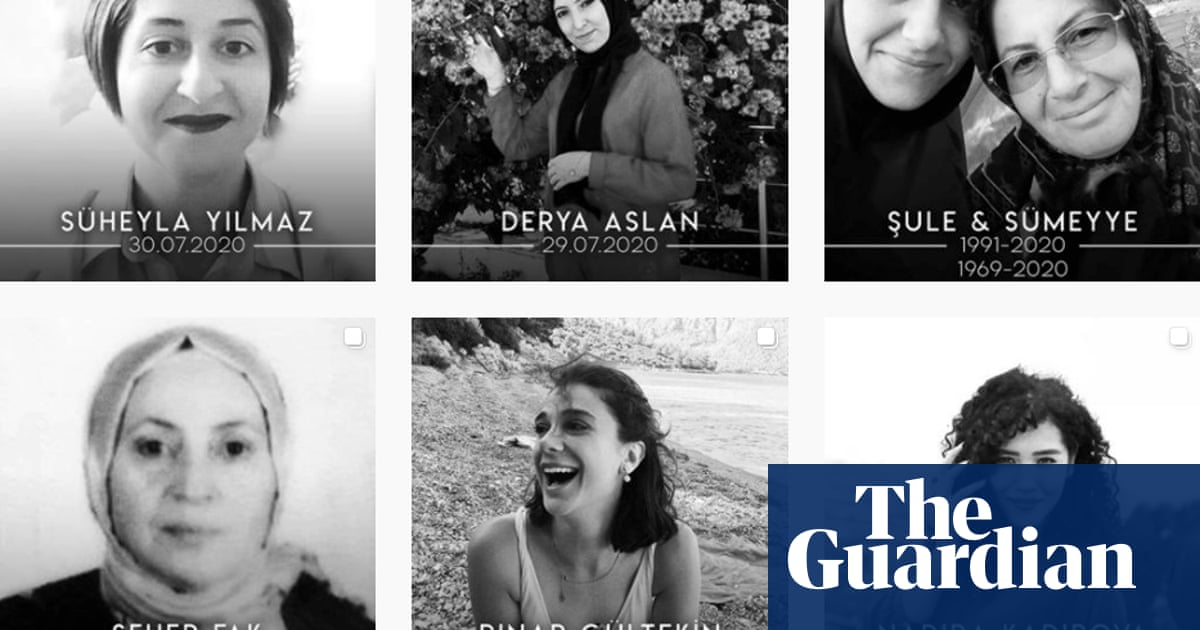 Feminists in Turkey have called on the rest of the world not to forget the original context of Instagram’s #challengeaccepted trend, which was supposed to draw attention to skyrocketing rates of gender-based violence in the country before it was co-opted by western celebrities.

Femicide, violence against women and so-called “honour” killings are deeply rooted issues in Turkey. Last week, the country was rocked by the brutal killing of Pınar Gültekin, a 27-year-old student, who was allegedly killed by an ex-boyfriend.

Campaigners are also deeply worried about fresh efforts by President Recep Tayyip Erdoğan’s ruling party to repeal a Council of Europe treaty known as the Istanbul convention, groundbreaking legislation from 2011 that protects victims of domestic and gender-based violence and effectively prosecutes offenders.

Marches in four Turkish cities last week mourning Gültekin’s death and calling on Turkish politicians to uphold the Istanbul convention were accompanied by hundreds of thousands of social media posts: one initiative involved posting photos on Instagram in black and white to emphasise how pictures of murdered women end up in black and white in the pages of newspapers.

The black and white challenge appears to have started in 2016 to raise awareness of cancer, but the repurposed idea along with appeals for women to tag others who inspire or support them and hashtags such as #challengeaccepted and #İstanbulSözleşmesiYaşatır, or “Enforce the Istanbul Convention”, quickly took off in Turkey.

As the hashtags were translated and shared in other languages and western celebrities such as Jennifer Aniston, Eva Longoria and even Ivanka Trump picked up on the trend, the original context appears to have been lost on most users, morphing into a lighthearted – if directionless – display of female solidarity.

❤️Pınar Gültekin ❤️ The incident that triggered the latest viral, black and white photo challenge, is the murder of Pinar Gutelkin, a 27-year-old woman, who was allegedly killed by her jealous ex-boyfriend, who first strangled and then tried to burn her. The hashtags #kadınaşiddetehayır and #istanbulsözleşmesiyaşatır were used by Turkish women as part of the challenge, but they were dropped as the trend became more westernized. ▫️▫️▫️▫️▫️▫️▫️▫️▫️▫️▫️▫️ FOR THOSE WHO’D LIKE MORE INFO:❤️ ▫️▫️▫️▫️▫️▫️▫️▫️▫️▫️▫️▫️ ”Turkey is one of the top countries when it comes to femicides. Most often the murderers barely get a slap on a wrist or no charges at all… Our government is trying to abolish certain aspects of [the] Istanbul Convention which is a human rights treaty that protects women against domestic violence…(Unknown Twitter User).” ▫️▫️▫️▫️▫️▫️▫️▫️▫️▫️▫️▫️ 🔹In 2019, 474 women were murdered, mostly by partners and relatives, the highest rate in a decade, according to The Guardian. In Turkey, between 2010 and 2017, in which at least 1,964 women were killed (balcanicaucaso.org, 2018). (Ceyda Ulukaya is a journalist and the creator of the first map of femicides in Turkey that shows these numbers). ▫️▫️▫️▫️▫️▫️▫️▫️▫️▫️▫️▫️ 🔹What is femicide?Femicide is the term used for the masses of women who are abused and murdered at the hands of their partners, according to the World Health Organization. ▫️▫️▫️▫️▫️▫️▫️▫️▫️▫️▫️▫️ 🔹 “But perhaps the biggest contributor to violence against women is that the majority of male culprits do not face serious sentences for their crimes. In 2016, the Turkish Prime Minister Binali Yildirim attempted to pass a bill that would pardon men convicted of sex with underage girls if they married them. The uprising that followed was massive. Those opposed said it ‘legitimized statutory rape and encouraged the practice of child brides.’ The bill was ultimately scrapped but is a good indicator of where Turkish ideals may lie (Jackie Trujillo, New York Minute, 2020).” ▫️▫️▫️▫️▫️▫️▫️▫️▫️▫️▫️▫️ #pınargültekin #ChallengeAccepted #kadınaşiddetehayır #StopViolenceAgainstWomen #istanbulsözleşmesiyaşatır ▫️▫️▫️▫️▫️▫️▫️▫️▫️▫️▫️▫️

“The black and white photo challenge and #challengeaccepted movement did not start in Turkey, but Turkish women sparked the latest round of pictures because we are worried about withdrawing from the Istanbul convention. Every day, after the death of one of our sisters, we share black and white photographs and keep their memory alive,” said Fidan Ataselim, the general secretary of the campaign group We Will Stop Femicide.

“The Istanbul convention keeps Turkish women alive. We call on women from all over the world to spread this message and stand side by side with us against inequality.”

Chef Nigella Lawson’s original #challengeaccepted post was followed up with an apology after activists pointed out the original meaning of the campaign.

“I have only just found out that this challenge was originally meant to draw attention to the growing number of murders of women in Turkey, and am mortified didn’t know [sic] when I posted. It seems inappropriate now, and hardly fitting for the serious and terrible issue of femicide. I apologise,” she wrote.

Comedian Miranda Hart also issued a mea culpa for posting a photograph without realising where the campaign had come from.

“I am one of many women who didn’t research the #challengeaccepted #blackandwhitechallenge thoroughly. Although I am always grateful for a chance to support and uphold the women who uphold me, this ‘challenge’ is about raising awareness of the atrocious Femicide in Turkey.”

Gültekin is one of 120 women who have been killed in Turkey so far this year, mostly by partners and relatives. A total of 474 women were killed in 2019, the highest rate in a decade in which the numbers have increased year on year. The figures for 2020, affected by coronavirus lockdowns, are expected to be even higher.

Despite the fact Turkey has the highest femicide rate among 34 OECD countries, conservative elements in Turkey’s political sphere have repeatedly petitioned for the country to withdraw from the Istanbul convention on the grounds that it encourages divorce and ‘immoral lifestyles’.

On Tuesday, Meral Akşener, the leader of the opposition İYİ Parti (Good party) called on Erdoğan to uphold the legislation, saying that the government’s failure to properly implement the law since it was ratified in 2014 was contributing to the rising levels of gender-based violence.