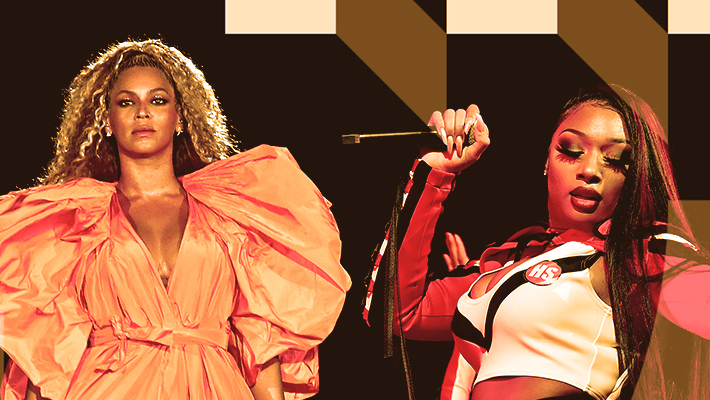 As the world’s biggest and best entertainer, Beyonce’s presence is regal in nature and everything she touches turns into gold. Her taste in fashion and music puts her in the realm of trendsetter and someone who fans can trust to put them onto things that are neat and she is fully aware of her power.

Over the course of her career, Queen Bey has taken this power and used it for good. Recently she put out a list of Black-owned businesses people should patronize and she is also known for giving opportunities to little-known creators and musicians on projects such as her just-released visual album Black Is King. A co-sign from Beyonce is like a co-sign from Jesus. The loyalty of her fans, aptly known as the Beyhive, support everything she does and they trust her because she has never let them down, especially when it comes to music. The power she has to change an aspiring musician’s life into something they’ve always dreamed of is real and she has done it countless times to much avail.

Here are a few superb acts that Beyonce has shined a light on, thus exposing them to the possibility of becoming not just national stars, but renown acts all across the globe.

Chloe and Halle Bailey, the burgeoning R&B duo known as Chloe x Halle, were relatively unknown outside of YouTube before Beyonce became aware of their existence. Impressed by their ability to sing, Bey put them through artist and development (a rarity nowadays), much like what she went through with Destiny’s Child. The result of that is clear by the feel of their extremely creative roll out for their album Ungodly Hour. This includes their consistency of engaging with fans through charming Instagram Lives, allowing for fans to connect with the seemingly elusive sisters while still getting live performances done right in their living room. Clearly, Beyonce’s work ethic permeates through these two young women.

Signing to Bey’s label Parkwood Entertainment in 2016, Chloe and Halle immediately got to work with their debut EP Sugar Symphony and also joined her on The Formation Tour and later, On The Run II with Jay-Z. Two years later, they joined the cast of Grown-ish and released their debut album The Kids Are Alright, which earned the Bailey sisters Grammy Award nods for Best New Artist and Best Urban Contemporary Album. Chloe, who provided most of the production work on The Kids Are Alright, lent her beat-making talents to Ungodly Hour as well. Beyonce peeped the potential in these girls and she was absolutely right in believing in them. Now, with Ungodly Hour out, they have two of the most popular songs this year with “Do It” and “Forgive Me.”

Boots came through with all the vibes on Beyonce’s self-titled, game-changing surprise album release. Though the world had no clue who he was, Beyonce did and her choosing him to help craft her project resulted in the musician, born Jordan Asher Cruz, nabbing a Grammy nomination for Album Of The Year. His moody and dark production represents over half of the album, including “Haunted,” “Jealous,” “Flawless” and “Superpower.”

Shortly after Beyonce‘s release, Boots shared a beautiful duet between the two titled “Dreams” to his SoundCloud. The same vibe was maintained on the tracks he worked on with her for Lemonade, which earned him a second Grammy nod for Album Of The Year. He’s since gone on to work with Run The Jewels, Sir, and Kelela. The power of Beyonce believing in you is real.

Megan Thee Stallion ran 2019 with her Hot Girl summer movement. This year, she essentially owns TikTok thanks to her viral hit “Savage” off her Suga EP and its accompanying dance created by Keara Wilson. Seemingly out of nowhere, however, Beyonce took it upon herself to hop on the track for the remix.

This unexpected move transformed the hottest song of the year into pure flames. It’s the inevitable Houston collaboration that fans had been waiting for and is also a great look for the city. Beyonce’s added excitement to the song, with her shocking rhymes co-signing “demon time” and OnlyFans, boosted the track, giving Megan her first No. 1 on the Billboard Hot 100. In June, “Savage” was certified Platinum and remains one of the hottest songs in the streets and on TikTok.

The Nintendo-esque, salsa production and essence of Dram‘s “Cha Cha” off his debut EP #1Epic was cool enough to catch the attention of Beyonce before the rest of the world caught wind of the song. Randomly, Queen Bey posted a video of her twisting her hips and having fun to the track on her Instagram page to her more than 150 million followers along with the caption, “This song makes me happy.” Once that happened, the talented singer admittedly lost his mind and things for the Virginia native consequently blew up.

“I literally stood on the closest bench and hassled random people walking down the street, being like, ‘HEY, BEYONCÉ LIKES TO CHA CHA!!!,’” he annotated on the lyrics found on Genius. His next single, “Broccoli” featuring Lil Yachty, earned a Grammy nod for Best Rap/Sung Performance off his debut album Big Baby Dram.

O.T. Genasis is a West Coast hero consistently coming with the bangers since he came on the scene from 2014’s “Coco” to 2015’s “Cut It.” In 2018, during Beyonce’s Coachella performance christened as Beychella, the singer chose to bless O.T. Genasis with a major stamp of approval by incorporating his braggadocio track “Everybody Mad” into her electric performance. The use of the song came as a surprise to the rapper who expressed immense gratitude that Queen Bey had an entire dance routine to his song.

“This is lit right here,” the Long Beach native said in an interview with TMZ. “I sat there and I was like ‘not only did she play my song, but the band played to it.’ You actually have to put that together and be at rehearsal. That’s just dope, especially since I didn’t really get the credit I felt I deserved for the song when I made it.”

The song currently boasts over 19 million views on YouTube and sits as one of his most viewed videos.

Big Freedia is a New Orleans treasure and it should come to no surprise that Beyonce, who has Louisiana roots, would at some point connect with the bounce music legend. In 2017, Bey made it happen by using her voice on her surprise Lemonade single “Formation.” “I did not come to play with you hoes,” Freedia says with a thick NOLA drawl. “I came to slay, bitch! I like cornbread and collard greens, bitch! Oh yas, you besta believe it!” She was also featured on Beyonce’s Formation Tour just to help perform the track.

Though Big Freedia already had her own show on Fuse back in 2013, no doubt her association with Beyonce put her in the graces of a more mainstream audience.

In 2018, Drake used her voice on his No. 1 hit “Nice For What” and was slated to head out on tour with pop star Kesha until the pandemic hit. Nevertheless, Beyonce’s shining a major light on Freedia has been huge for the rapper as she continues to make dance hits for the club.