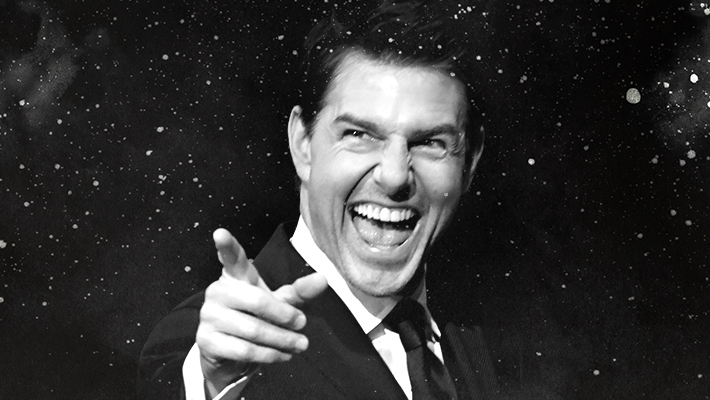 When I was a kid, I’d do anything for a laugh. Run into walls, jump off of a stage straight onto my knees, do an interpretive dance to Seal’s “Kiss From A Rose” to win a dance contest. I don’t know if those laughs were for me or at me (yeah… I do), but the noise was the noise and it gave me purpose as an awkward, transient fat boy. Sometimes I think Tom Cruise is stuck in that kind of perpetual approval pursuit. Which sounds bad! But hear me out.

While Cruise is probably addicted to the sound of applause (and adrenaline, since his methods usually have him hanging off a plane or a mountain into his late ’50s), the world has enough people who make art for hollow critical praise, awards, and self-satisfaction. Sure, he gets PAID, but Tom Cruise is a crowd-pleasing pop culture factory and an enduring and seemingly tireless icon of the people (well, some of the people). It’s what he was put on this earth to be, but I do worry now that he’s gonna try to do it in space. Not because of him but because of us.

The report from Deadline says Cruise secured a $200 million dollar budget from Universal to partner with billionaire maybe Bond villain Elon Musk (and frequent Cruise collaborators Doug Liman and Christopher McQuarrie) on a literal space adventure that will result in the first-ever full-length movie shot off-world. It’s getting attention because, among other things, it’s Tom Cruise and Elon Musk firing a cash cannon at the stars in the midst of, to quote Dewey Cox, “a dark fucking period.” But is that interest going to hold when the initial buzz fades and this has to live on the merits of what it puts on a screen? Will eyes widen? Will jaws slacken? Will the next evolutionary step in production mean much down here on Earth? It’s hard to say sight unseen. I don’t know, but I’m not as optimistic as I thought I’d be.

When Jessica Toomer and I took a look back at the Inception hallway scene and forward to the expected practical wizardry of Tenet, we positioned that kind of creation as a rare but needed thing in an era of CG homogenization. And it is and you could argue that this is exactly what we were asking for: a studio, in full defiance of risk aversion, making a big move forward with boots on the ground (or in the vacuum of space, whatever) and imagination at the wheel. And yet…

When you’re swimming in the details of an arduous creative process driven by an uncommon commitment to excellence and innovation it’s easy to get romantic about every last bit of it including the finished product. It’s inspiring what these humans can do with a little elbow grease, imagination, and an airplane hanger. But distanced from that process you remember that people often see these scenes without knowledge of their impressive craft and compelling backstories. Do they stand up on their own visual wow? The hallway scene certainly does. It’s special for the reasons expressed in that article and from when you see it unfold. But a lot of the time, more and more, it feels like these things deliver a glancing blow before retiring to the pile of other amazing but forgettable moments. Blame it on outstretched minds.

I’ve seen lush planets, the ocean deep, and dinosaurs walking beside human beings. I’ve seen time go forward and backward and sideways. Believed a man could fly and that superheroes could save New York and avenge the whole of the universe. I’ve seen the splendor and terror of limitless space. It was all fake as fuck, cool as shit, and it all makes me feel like a bored God, bellowing to Hollywood to keep impressing me when I know that it’s becoming a more and more difficult thing to pull off. And it’s depressing because to bring it back to Tom Cruise space cowboy, how are we going to be impressed by the sight of him tethered to a space station floating above of us all without constantly repeating the phrase “this is real” in our heads?

Once, Alexander the Great wept for there were no more worlds to conquer. Tom Cruise isn’t gonna weep, he’s gonna smile that smile and leave the planet in pursuit of claps, thinking he has a beat on a legit new world to conquer. And we’re going to be mostly unmoved, shouting “Marvel did it! Marvel did it!” The pursuit of greatness, like technology, is a blessing and a curse.