The 2021 4Runner is gaining a new Trail Special Edition, which was custom-made for the U.S. market. The new 4Runner Trail is based on the SR5 grade and features things like a Yakima LoadWarrior rooftop cargo basket, a custom 40-quart cooler, and a sliding cargo tray, as well as a set of dark gray TRD Off-Road wheels.

The new 2021 4Runner Trail will be offered in either 2WD or 4WD and will also feature black exterior badging, black seats with tan stitching, and all-weather floor liners. The available color choices include Cement, Midnight Black, Super White, and the popular Army Green.

The more rugged 4Runner TRD Pro model replaces Army Green with the new Lunar Rock color and receives a number of small updates. These include a new set of black TRD flow form alloy wheels, which Toyota claims are not only stronger and more rigid but also help in making “adjustments to increase ride handling and performance, specifically shock absorber tuning”.

Toyota is also introducing LED headlights and LED fog lights across the 2021 4Runner lineup as standard, with the Limited, Nightshade, and TRD Pro grades also getting LED high beams. 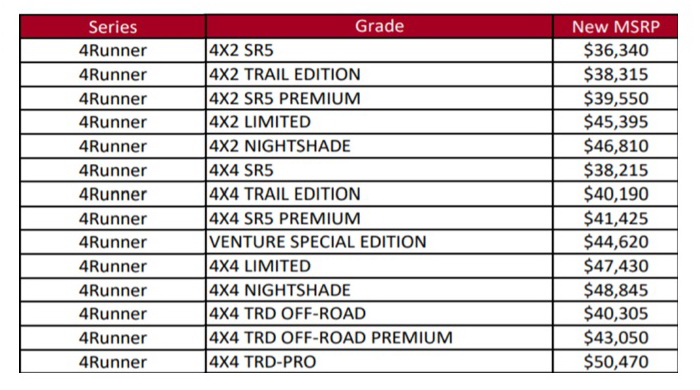