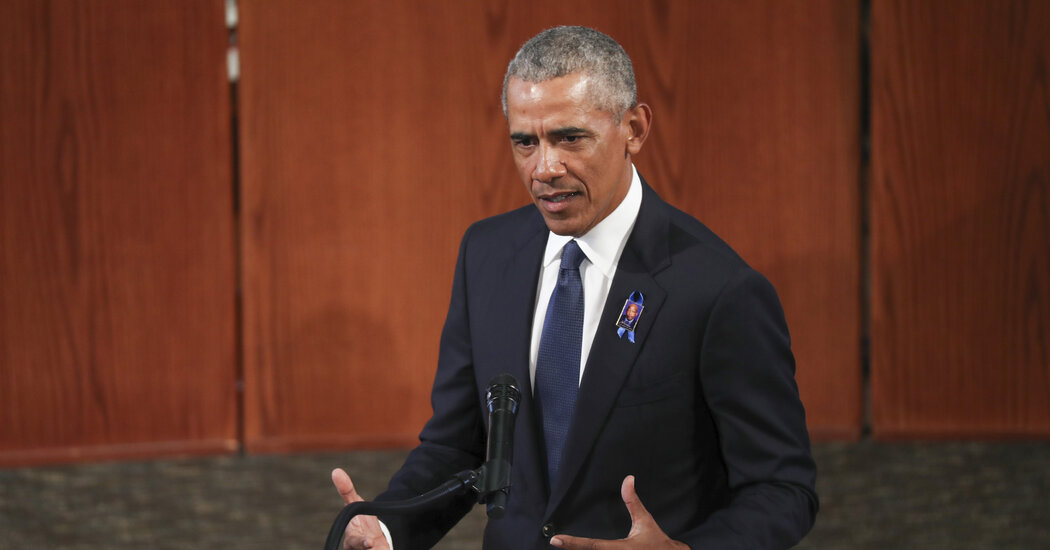 WASHINGTON — Former President Barack Obama called on Thursday for eliminating the filibuster, joining a growing chorus of Democrats who portray the Senate’s signature procedural weapon as an obstacle to social progress that must be abolished if the party captures the Senate and White House.

The appeal by Mr. Obama to do away with a tactic that Senate Republicans used to thwart him and the Democratic agenda for much of his eight years in office came during his eulogy in Atlanta for Representative John Lewis, the civil rights icon. The former president seized the moment to cast the filibuster as a vestige of a grim period in the United States when Southern lawmakers used it to impede voting rights and other advances for African-Americans.

“Once we pass the John Lewis Voting Rights Act, we should keep marching,” Mr. Obama said, referring to legislation Democrats are pushing on Capitol Hill in the face of opposition from Republicans. “And if all this takes eliminating the filibuster — another Jim Crow relic — in order to secure the God-given rights of every American, then that’s what we should do.”

His comments came as Democrats increasingly hope that their party can elect former Vice President Joseph R. Biden Jr. to the presidency and win enough seats to knock Republicans out of the Senate majority, giving Democrats the White House and control of both chambers in Congress.

But even the most optimistic projections would leave Democrats well short of the 60-vote supermajority required in the Senate to break filibusters blocking legislation. That prospect has some Democrats worried that they will prevail in November only to see their legislative initiatives succumb to filibusters led by Senator Mitch McConnell of Kentucky, the Republican leader, come January.

As a result, some liberal senators have joined progressive groups in pushing Democrats to promise they would gut the filibuster, which has impeded Democratic initiatives on gun safety, immigration and health care, to name a few. Mr. Obama’s plea on Thursday is likely to lend new energy to that drive and elevate the fate of the filibuster in Senate contests around the country.

“President Obama is absolutely right,” said Senator Bernie Sanders, independent of Vermont and a former Democratic presidential candidate. He said ending the ability to filibuster would allow Democrats to “pass a comprehensive agenda to guarantee the rights and dignity of everyone in this country.”

Top Democrats have been reluctant to embrace the call to blow up the filibuster, fearing it could backfire whenever Republicans returned to power. In 2013, Democrats exasperated at Republican success in blocking Mr. Obama’s judicial nominees lowered the threshold for advancing presidential nominees to a majority, a change that allowed President Trump and Mr. McConnell to push through 200 new federal judges.

The right to filibuster legislation remains in place and Democrats fear that eliminating it could make moderate and independent voters uneasy, alter the character of the Senate and further decrease any attempts at bipartisanship. Democrats from Republican-leaning states have said they do not support the idea.

But Mr. Biden, a product of more than three decades in the Senate who prides himself on his institutional credentials, recently showed more openness to the idea of reducing the power of the filibuster. Senator Chuck Schumer of New York, the Democratic leader, said any decision would have to await the election though “nothing’s off the table.” It is clearly on the minds of Senate Democrats as they see a chance to take the majority.

“A lot of us are seriously contemplating that possibility, but I’m not ready to make a commitment at this point,” Senator Richard J. Durbin of Illinois, the No. 2 Senate Democrat, told reporters on Capitol Hill. He said a motivating force was how the Senate “has disintegrated under the abuse of the filibuster by Mitch McConnell.”

Once rarely used, the filibuster has become routine in the Senate as deep polarization set in. In the past, Mr. Obama came close to calling for jettisoning it, but Adam Jentleson, a progressive activist and a top aide to the majority leader at the time, Harry Reid, said Mr. Obama’s framing of the filibuster as a negative force would make it harder for Democrats who had been reluctant to consider the move to stick with that position.

“Not only did he adopt the cause of reform, he cast it as a structural civil rights issue,” said Mr. Jentleson, the author of a coming book on the decline of the Senate. “Obama has reset the debate and given senators a reason to see reform as a positive good, a step they can take to fulfill his vision and erase the legacy of Jim Crow.”

Trying to turn Mr. Obama’s comment on Democratic Senate candidates, Republicans said that eliminating the filibuster would empower the most liberal faction of the Democratic Party and alienate centrist voters.

“Mainstream voters can’t stand what they’re seeing from the woke mob of liberals hijacking cities across America, and these candidates will have to answer for why they want to give them more power,” said Jesse Hunt, a spokesman for the National Republican Senatorial Committee.

A Senate rules change like weakening the filibuster is supposed to require 67 votes. But in recent years, both parties used a convoluted parliamentary maneuver to set the new Senate standard on nominations to a simple majority and such an approach could be used to lower the 60-vote supermajority still needed to advance legislation to a majority.

Mr. McConnell, who has resisted entreaties from Mr. Trump to end the filibuster and roll over Democrats, warned Democrats last month that it would be a mistake to do so.

“The important thing for our Democratic friends to remember is that you may not be in total control in the future,” he said.