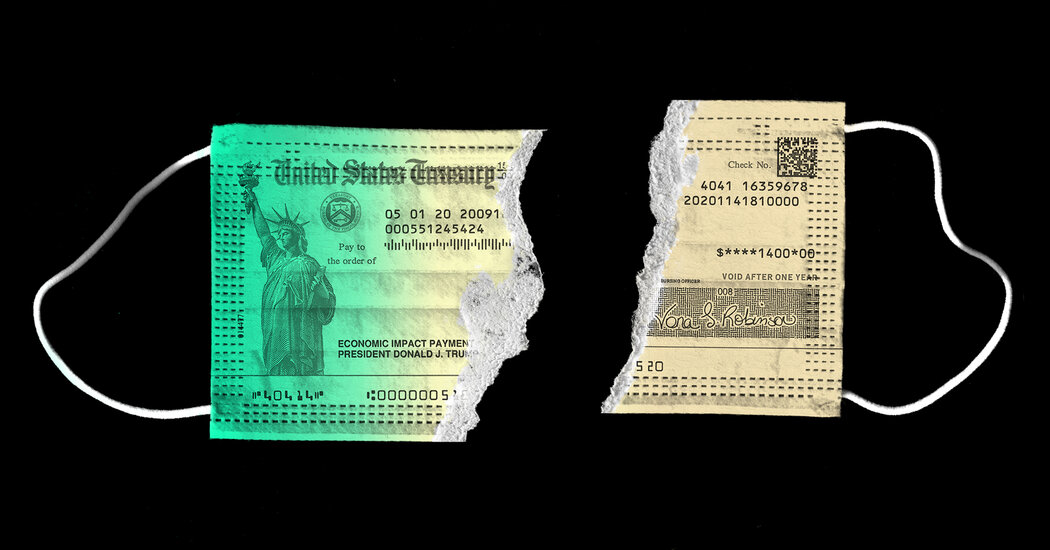 The worst economic news on Thursday was not the official announcement that the American economy shrank at an annualized rate of 32.9 percent in the second quarter of 2020 — a grim quantification of the pain caused by the coronavirus pandemic.

No, the really bad news was the lack of action on Capitol Hill.

Congress needs to extend the emergency aid programs that were created in March to help Americans endure a broad suspension of economic activity. Instead, even as the pandemic rages on, Congress is allowing those aid programs to expire.

People who lost jobs during the pandemic have received $600 a week from the federal government on top of standard unemployment benefits. For many, the money is all that has kept them from going hungry and has allowed them to stay in their homes. It has prevented a significant increase in the share of Americans living in poverty. But those payments end this week, even as unemployment remains at a level last experienced during the Great Depression.

The federal government also is ending a moratorium on evictions, as well as a program that provides aid to small businesses.

Among those pleading for aid that hasn’t come: state and local governments starved of tax revenue. School districts that need money for safety equipment. Hospitals caring for the victims of the pandemic. Elections officials bracing for November.

The abject failure to act is not the fault of Congress in a collective sense. House Democrats passed a serviceable aid bill more than two months ago. Responsibility for the current debacle rests specifically and squarely on the shoulders of the Senate majority leader, Mitch McConnell, Republican of Kentucky, and the other 52 Senate Republicans.

From the moment Congress passed the last big coronavirus aid bill, in March, it has been a matter of public record that the aid was going to end in August.

For a time, there was reason to hope that the worst of the pandemic could be over by now, too. But it has been clear for weeks that the United States has failed to control the pandemic and that many Americans still would need economic aid beyond July. Yet Mr. McConnell and his caucus chose to spend the summer confirming federal judges rather than confronting the crisis.

Only in recent days have Republicans belatedly begun a frantic effort to devise a coherent response to the crisis. Like students who wait until the night before an assignment is due, they have pleaded for more time and asked if they could submit a part of the work. The nation will suffer the consequences.

Mr. McConnell put forward a proposal on Monday that included billions of dollars for new F-35 jet fighters, but not a penny in aid for state and local governments. In any event, it quickly became clear that many Senate Republicans were not exactly on board. “There’s no consensus on anything,” said Mr. McConnell’s deputy, Senator John Cornyn of Texas. Senator Josh Hawley, Republican of Missouri, called the proposal “a mess.”

Lawmaking is laborious and rarely proceeds in a straight line. If the calendar still said June, there would be less reason to worry about these convolutions.

But behaving in late July as if it were still June is a recipe for disaster.

Even with the infusion of trillions of dollars in federal aid since March, many Americans are struggling to ride out the crisis. Almost 40 million people do not expect to be able to make their next rent or mortgage payment. Almost 30 million Americans said they did not have enough to eat during the week ending July 21. Last week, for the 19th straight week, more than a million people filed fresh claims for unemployment benefits.

Grim as those numbers may be, the United States is on the verge of an even deeper crisis.

Ernie Tedeschi, an economist at Evercore ISI, a financial research firm, estimates that failing to resume the federal unemployment payments would cause a drop in consumer spending large enough to eliminate about 1.7 million jobs — roughly the magnitude of job losses during the recessions of the early 1990s and the early 2000s.

Britt Coundiff of Indianapolis is living on unemployment benefits after losing her job at an art-house cinema. Without the federal payments, she’ll be left with a weekly state payment of $193. She told Talmon Joseph Smith of The Times, “With two kids and rent and groceries, that is not enough for us to survive.”

On Thursday, Senate Republicans proposed an inadequate stopgap: a narrow extension of supplemental unemployment benefits. Instead of continuing the $600 weekly payments, however, Republicans proposed cutting the sum to $200 a week, through the end of the year. That would replace only a portion of the income of the average unemployed worker, which is reasonable in normal times; it encourages people to find jobs. But in the midst of a pandemic, with few jobs available, the benefit cut is an act of pointless cruelty.

The result: More than 20 million unemployed Americans are about to lose $600 a week. They need the money. They can’t find jobs. And the Senate is leaving for vacation.

President Trump is not helping. The administration fought for the inclusion of a payroll tax cut — a proposal so patently misguided that it forced Senate Republicans into the rare position of opposing a tax cut. It asked Republicans to include funding for a new F.B.I. headquarters. It backed the inclusion of billions of dollars in new military spending, partly to replace money Mr. Trump diverted for construction of his border wall.

One thing Mr. Trump has not fought for is aid for Americans in need.

But Mr. Trump is not a member of the Senate. He does not have the power to prevent Senate Republicans from doing their jobs. That responsibility is theirs alone.