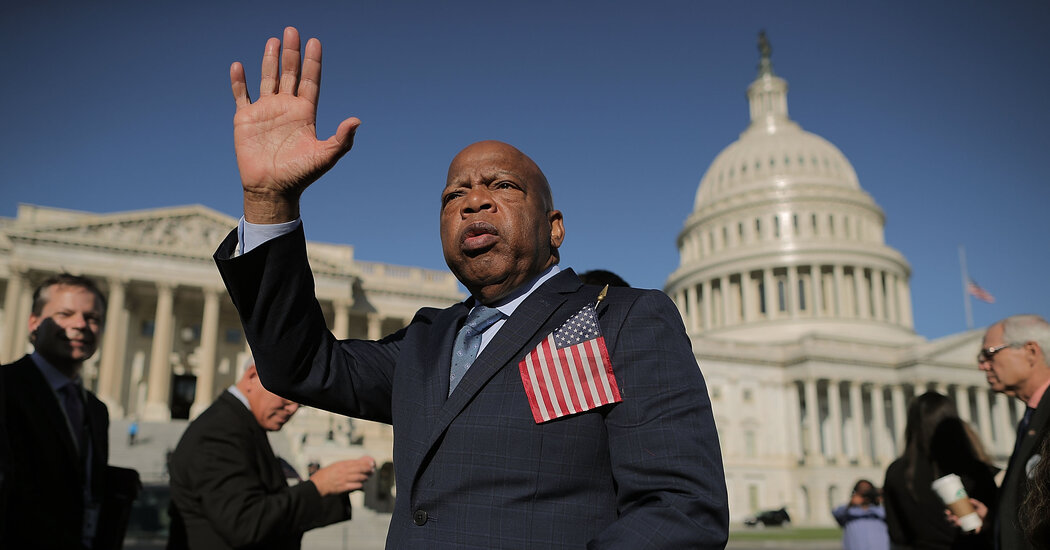 In June 2017, I ran into John Lewis outside of Atlanta, where he was campaigning for his former intern Jon Ossoff in the special election for Georgia’s Sixth Congressional District. I asked him something I asked everyone in those days, when the horror of this administration was still fresh: How confident was he that America would recover from Donald Trump?

There was something saintly about Lewis, whose funeral was held on Thursday. What’s striking in accounts of his youthful encounters with snarling, murderous white supremacy is not just his courage, but also his calm and otherworldly clarity.

The historian Taylor Branch described a 1961 debate within part of the civil rights movement about whether to keep up demonstrations in Nashville in the face of escalating white violence. “Whenever asked a question, he ignored the fine points of whatever theory was being put forward and said simply, ‘We’re gonna march tonight,’” Branch wrote of Lewis.

A prominent white clergyman named Will D. Campbell lost his temper, accusing Lewis of the sin of pride. “Lewis smiled warmly at Campbell, as though taking pity on him,” wrote Branch. “‘OK, I’m a sinner,’ he replied softy. ‘We’re gonna march.’” Lewis’s persistence won, the march went on and he was arrested for the fourth of at least 45 times.

Lewis, the best of this country, had seen the worst of it and still had faith. “Ordinary people with extraordinary vision can redeem the soul of America by getting in what I call good trouble, necessary trouble,” he wrote in an essay for The Times to publish on the day of his funeral.

Lately I’ve struggled to hold on to hope of redemption. On the night Trump was elected, I felt as if the ground was crumbling beneath my feet, and yet looking back I was naïve about how bad things could get.

Mass death from a pandemic running unchecked, without even the pretense that the federal government will help us. A Congress that’s allowing emergency aid to the unemployed to lapse during an economic crisis as bad or worse than the Great Depression. Unidentified men in camouflage beating protesters in the streets. Public education near collapse. A president musing about postponing the election, and his thuggish secretary of state backing him by suggesting that’s a live possibility.

My life is far easier than that of most people in this country, but since March of this despicable year I’ve felt dread from the moment I open my eyes in the morning until I fall asleep at night. Sometimes in the evening my son cries and says he hates being a child in the time of coronavirus, and I try not to cry too.

If this president makes good on his threats to undermine an election he’s likely to lose, many of us will be called to pour into the streets and face the brutality of Trump’s goons. This thought makes me feel ground down and frightened, not brave and defiant. In middle age I’ve started to envy those like Lewis who are able to believe in God.

But something I take from reading about the lives of civil rights heroes is that confidence didn’t always precede action. Sometimes it was action’s result. Branch wrote of how, the first time Lewis was arrested, “a lifetime of absorbed taboos against any kind of trouble with the law quickened into terror.” But on the ride to jail, “dread gave way to an exhilaration unlike any he had ever known.”

Lewis would later describe it as a sense of liberation, of crossing over. He and his fellow activists showed that hope is as much a practice as a feeling.

At Lewis’s funeral, Barack Obama eulogized him from Martin Luther King Jr.’s former pulpit. Our last real president was blunt about the parallels between the current regime and the villains of the civil rights era: “George Wallace may be gone, but we can witness our federal government sending agents to use tear gas and batons against peaceful demonstrators,” he said.

Lewis, said Obama, “devoted his time on this earth fighting the very attacks on democracy, and what’s best in America, that we’re seeing circulate right now.”