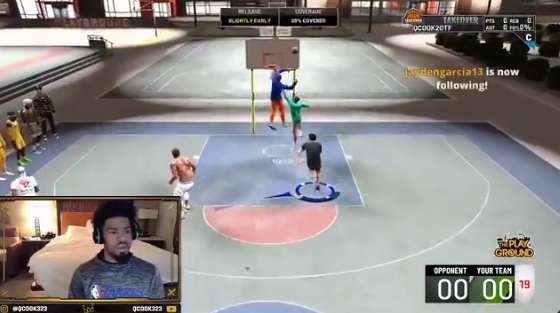 Video games will be very popular inside the NBA bubble, as players look to pass the time in the hotel at night without much else in the way of entertainment options — aside from pool parties with DJs that only Dwight Howard goes to.

There are plenty of NBA gamers that brought elaborate gaming setups, complete with Twitch cameras and multiple monitors, but even the most casual of NBA gamer will be breaking out their system to kill some time without the usual alternatives, like, nightlife or laying low with family. Late Sunday night, we got a peek at how this is going to look in NBA 2K, as Quinn Cook brought LeBron James and Anthony Davis to the park, where pandemonium ensued.

Other MyPlayers chased James, Cook, and Davis, all of whom play as themselves, just in street clothes, so there is no attempt to hide that it’s them. The cuts from Cook’s Twitch stream of people running and flocking around them is pretty hilarious, and once they finally found an open court — after getting bypassed by a team that used VIP status to get on the court they were waiting on — it looked, well, an awful lot like if LeBron James was playing in a random park.

James’ MyPlayer is just as capable of ridiculous plays as the real LeBron, and he recreated “The Block” on a poor, unsuspecting player who thought they had a wide open layup, only to have it swatted off the backboard to the delight of Cook.

This surely won’t be the last time some major NBA stars crash the 2K park, and if anything this will only make 2K even more popular as folks will be hopping on hoping for the chance to play against some of the NBA’s best — even if the end result is a little embarrassment.