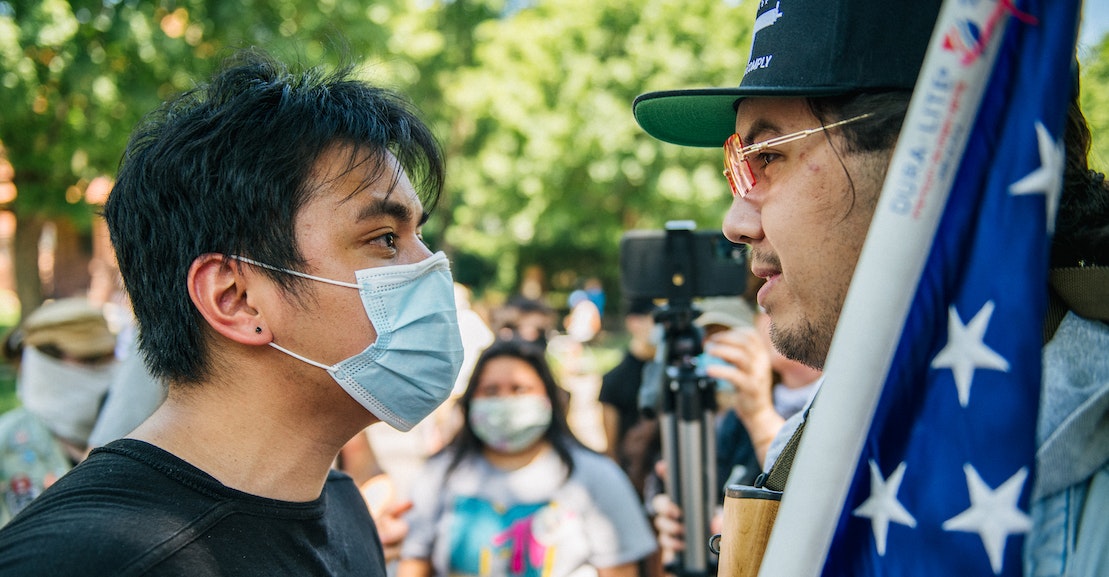 As coronavirus cases soared this week in a number of states—not a few of them red—a handful of GOP leaders and right-wing pundits had a desperate message for conservatives: Wear a mask, please. Mike Pence now wears a mask; Arizona Governor Doug Ducey, who had previously blocked local governments from requiring masks, now calls them “your best defense against this virus”; Fox & Friends host Steve Doocy, whom Donald Trump once ranked a 12 out of 10 in terms of loyalty, said recently, “I think that if the president wore one, it would just set a good example.” Even Trump himself, who has irresponsibly stoked anti-mask messaging for months, is now saying vaguely pro-mask things. The right’s about-face comes when the national coronavirus death toll is approaching 130,000. In such circumstances, wearing masks seems like literally the least anyone can do.

It was a unique kind of American idiocy that produced the ongoing conflict over wearing masks in public, a culture war now captured forever in the dozens of videos of unmasked, aggrieved individuals trying to enter stores or protesting to reopen states. But if anti-mask tantrums of conspiracists or wing nuts attract the most attention, they’re ultimately just a symptom of something much more dangerous: the long-running erosion of public programs in the United States, which set the stage for a type of extreme individualism that extends to almost every aspect of American life today. Conservatives have spent decades shrinking the scope and efficacy of social welfare initiatives. Now the near-total abdication of the government during the pandemic has shifted even more responsibility for weathering the outbreak onto individuals, and the result is a vicious clash between pro- and anti-mask culture warriors. But that conflict over personal choices just underscores how our government has been designed to fail.

At least since Ronald Reagan’s 1981 inaugural address in which he declared, “Government is not the solution to our problem, government is the problem,” Republicans (along with plenty of Democrats) have leaped to dismantle or weaken a range of federal and state-level programs constructed during the country’s New Deal and postwar eras, all while exhorting citizens to be proud that we’re almost completely on our own. As a result of that relentless assault, the already threadbare safety net has reached a breaking point during the pandemic.

Thanks to conservatives’ painstaking efforts to weaken states’ unemployment insurance programs over the years (in some cases intentionally making it harder for people to apply for benefits), millions of laid-off workers struggled to access badly needed money as the economy cratered. Likewise, the lack of paid leave policies, both nationally and in most states, has forced countless people to make the impossible choice between their health and their jobs since the start of the outbreak.

And, of course, the U.S. has nothing approaching a national health care system in the middle of the biggest public health crisis in a century. Though many—including Joe Biden—have argued that Medicare for All wouldn’t have prevented the spread of the coronavirus, it’s plain that the senselessness of chaining people’s health insurance to their jobs has created additional stress on people caught up in the twin crises of economic meltdown and the pandemic. (The federal government has promised to reimburse providers who treat uninsured Covid-19 patients, but that initiative has limitations.)