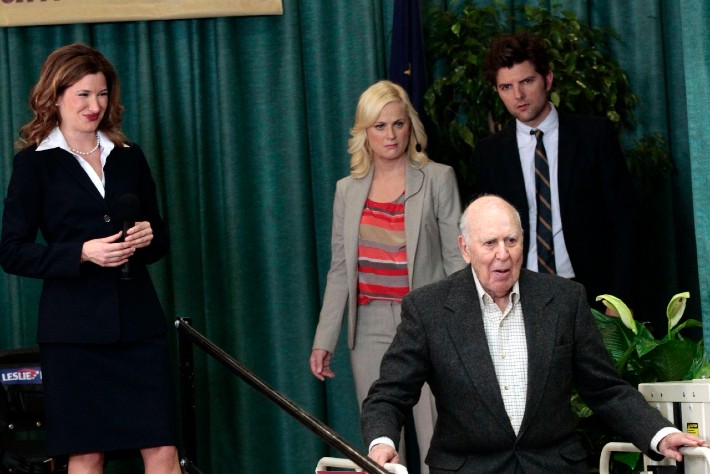 The death of Carl Reiner on Tuesday brought an outpouring of grief in the entertainment industry, starting with a loving tribute from his longtime friend Mel Brooks. Reiner’s death was not a shock by any means — all of us should be so lucky to live 98 years and be as successful and memorable as he was in his comedic career. But that longevity and breath of influence meant many shared tributes to his life and how it impacted them.

One of the most interesting was from The Good Place creator Mike Schur, who wrote up some thoughts for The Hollywood Reporter on Tuesday. The tribute touched on his impact on Schur and his career but mostly centered on the time Reiner appeared on the show in a Season 4 episode written exclusively with the comedic legend in mind.

At the time, Parks protagonist Leslie Nope was running for city council and the show wanted to make an elderly character who held considerable sway over others in the community. That role was designed for Reiner, and when he said yes Schur said the cast and crew basically geeked out over his appearance on set.

Carl saying “yes” made us feel like we’d been knighted, or something – like the emperor of comedy had decreed us worthy of his attention. I’m not sure if he understood that power he had – though we told him, certainly, when he showed up on the set. We bowed and scraped and genuflected, and in my memory he was lovely and self-effacing and thought we were being a bit silly. But we didn’t care. Adam Scott brought in a movie poster of The Jerk for him to sign. I asked him to tell me stories about The Dick Van Dyke Show, which when I was a kid taught me both what a writers’ room was and how to make one funny.

Schur talked about some of the things he learned from Reiner — including some very nice things about his childhood crush Mary Tyler Moore. But once he got on set, the showrunner was blown away by how sharp and effective the 90-year-old was at delivering his lines. One example given was a time when he was supposed to say that Leslie reminded him of his brother, who was also named Leslie. It was taken as a good sign before he was supposed to say “He lost a third of his body in a motorcycle accident.” But both Reiner and director Dan Goor did a bit of on-the-spot improv that really made the moment shine.

Dan Goor, who was directing, asked him if he wanted to improvise a little. His eyes lit up. Dan pitched him the joke: “He lost a third of his body in a motorcycle accident – the middle third.” The absurdity of it made him laugh out loud. I’m endlessly jealous, eight years later, that Dan made him laugh and I didn’t.

That wasn’t the end of the improv, though. And the result was so funny that some surprise laughs from off camera had to later get edited out to make the take useable.

He added the joke, and then just kept going – “He lost a third of his body in a motorcycle accident. The middle third. But they sutured the hell out of him. He’s – he’s fine now. Much shorter. But a good-looking, young, flat man.” Everything about it is wonderful. “They sutured the hell out of him.” What 90-year-old man pulls that sequence of words out of thin air? And the way he hits flat man at the end is like Simone Biles nailing a balance beam dismount. We used it all, naturally, though only after editing out both Adam and one of our camera operators giggling off screen. It’s just one tiny moment in his oeuvre – a couple scenes in one episode of one show, 70 years deep in his career — but good gravy was he funny.

It’s a touching tribute to Reiner in many ways, including a point that many have made in the way of his passing: not many people have been that funny for that long and have seen their comedy endure despite changing mores and tastes. In many ways Reiner and his brilliance was timeless, and those who watched Parks and Rec even today can get a glimpse of that from a 90-year-old who still knew how to steal the show.