While the absence of tourists during the coronavirus pandemic may have deprived Nara’s famous deer of their favourite snack, it has worked wonders for their digestive health.

Before the outbreak, millions of tourists descended on the western Japanese city – once the country’s capital – to view its shrines and temples, and feed the estimated 1,300 free-roaming deer in the its main park

While their preferred snack of senbei rice crackers are a nutritious combination of flour and rice bran, the deer simply ate too many of them, triggering a raging thirst.

“I suspect some deer ended up drinking too much water,” Yoshitaka Ashimura, secretary-general of the foundation for the protection of deer in Nara, told the Asahi Shimbun newspaper.

That, he said, took a toll on the animals’ health, causing gastrointestinal problems such as diarrhoea.

But now, deprived of their regular supply of senbei crackers, the deer have been forced to seek out more of their traditional staple diet of plants and nuts.

The result has been a transformation in their health, evidenced by the piles of perfectly formed pellet-like droppings affectionately referred to as “black beans”. 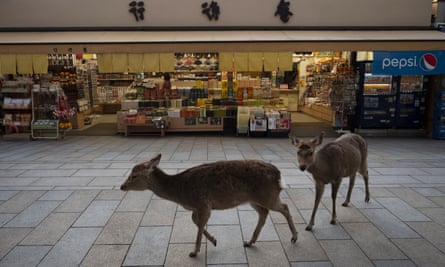 Nara’s deer, which have been known to attack visitors who tease them with food or try to take selfies with them, are believed to be divine messengers and were designated natural treasures in 1957.

The animals have the dramatic plunge in visitor numbers to thank for their improved bowel movements.

An estimated 2.58 million people visited Nara prefecture in 2018 – an almost 10-fold increase from 2012 – leading to a spate of deaths among animals who swallowed plastic bags and food wrappers discarded by tourists.

In May, however, just 1,700 people visited Japan from overseas – a 99.9% drop from the same month last year – as a result of travel bans and other restrictions prompted by the Covid-19 pandemic.

While the trend has hit businesses in Nara, it has brought an unexpected benefit for residents.

Not only are the animals’ droppings more compact, said Toshiharu Takaki, a regular visitor to the deer park for 40 years, “they also stink less”.