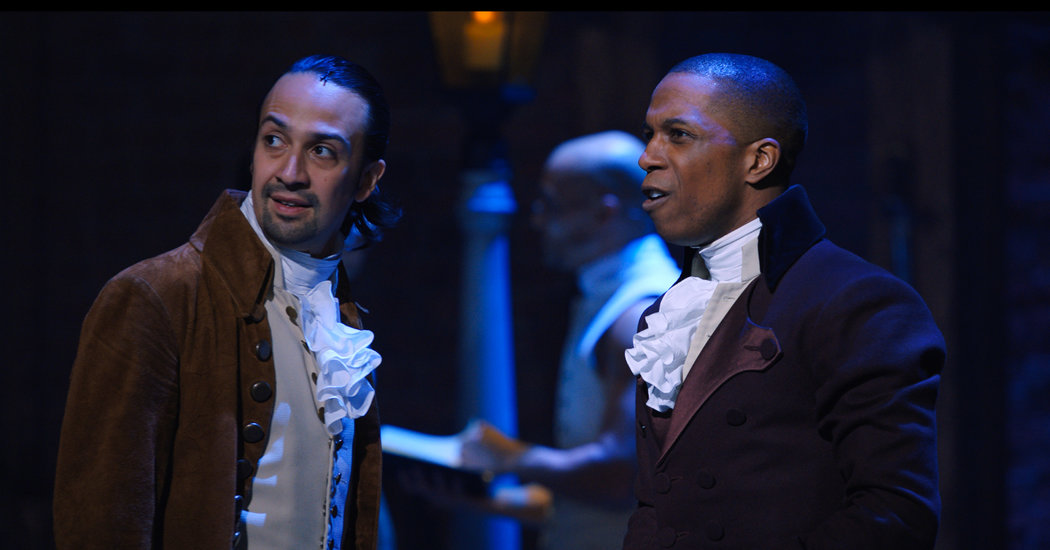 The opening scenes of the filmed version of the Broadway musical “Hamilton,” which starts streaming on Disney Plus on Independence Day weekend, pull you back in time to two distinct periods. The people onstage, in their breeches and brass-buttoned coats, belong to the New York of 1776. That’s when a 19-year-old freshly arrived from the Caribbean — the “bastard, immigrant, son of a whore” who shares his name with the show — makes his move and takes his shot, joining up with a squad of anti-British revolutionaries and eventually finding his way to George Washington’s right hand and the front of the $10 bill.

But this Hamilton, played with relentless energy and sly charm by Lin-Manuel Miranda, who wrote the music, book and lyrics, also belongs to the New York of 2016. Filmed (by the show’s director, Thomas Kail, and the cinematographer Declan Quinn) in front of a live audience at the Richard Rodgers Theater in June of that year, the movie, while not strictly speaking a documentary, is nonetheless a document of its moment. It evokes a swirl of ideas, debates, dreams and assumptions that can feel, in the present moment, as elusive as the intrigue and ideological sparring of the late 1700s.

“Hamilton,” which premiered at the Public Theater in early 2015 before moving to Broadway and then into every precinct of American popular culture, may be the supreme artistic expression of an Obama-era ideal of progressive, multicultural patriotism.

Casting Black and Latino actors as the founding fathers and their allies — Daveed Diggs as Thomas Jefferson and the Marquis de Lafayette, Christopher Jackson as George Washington, and Leslie Odom Jr. as Hamilton’s mortal frenemy Aaron Burr — was much more than a gesture of inclusiveness. (Jonathan Groff channels the essential, irreducible whiteness of King George III.) The show’s argument, woven through songs that brilliantly synthesized hip-hop, show tunes and every flavor of pop, was that American history is an open book. Any of us should be able to write ourselves into it.

Alexander Hamilton, the first secretary of the Treasury and an architect of the American banking system, was Miranda’s chosen embodiment of this belief: an outsider with no money and scant connections who propelled himself into the center of the national narrative through sheer brains, talent and drive. Miranda shares some of his hero’s ambition and intelligence, and turns Hamilton into an avatar of modern American aspiration. Just like his country, he sings, he’s “young, scrappy and hungry.”

The tale of his rise fuses individual striving and collective struggle. For all his sometimes comical self-regard (he has a pickup line about “my top-notch brain”), Hamilton doesn’t measure success just in personal terms. That’s Burr’s great shortcoming: He scrambles after power and prestige without taking a risk or committing himself to a principle. But Hamilton wants to make his mark by making a difference. Self-making and nation-building are aspects of a single project.

“Hamilton” is a brilliant feat of historical imagination, which isn’t the same as a history lesson. Miranda used Ron Chernow’s dad-lit doorstop the way Shakespeare drew on Holinshed’s Chronicles — as a treasure trove of character, anecdote and dramatic raw material. One of the marvels of the show is the way it brings long-dead, legend-shrouded people to vivid and sympathetic life. The close-ups and camera movements in this version enhance the charisma of the performers, adding a dimension of intimacy that compensates for the lost electricity of the live theatrical experience.

The glib, dandyish Jefferson is a perfect foil for Hamilton: his rival, his intellectual equal and his sometimes reluctant partner in the construction of a new political order. Though Hamilton hates it when Washington calls him son, the father of the country is also a warm, sometimes stern paternal presence in his protégé’s life. The duplicitous Burr may be the most Shakespearean figure in the pageant, a gifted man tormented and ultimately undone by his failure to make himself matter.

Not that public affairs are the only forces that move “Hamilton.” I haven’t forgotten the Schuyler sisters, who have some of the best numbers and who somewhat undermine the patriarchal, great-man tendencies inherent in this kind of undertaking. Miranda weaves the story of revolutionary ferment and the subsequent partisan battles of the early national era into a chronicle of courtship, marriage, friendship and adultery that has its own political implications. Angelica Schuyler (the magnificent Renée Elise Goldsberry), the oldest of the three sisters, is a freethinker and a feminist constrained by the narrowness of the options available to women of her time and class. Her sister Eliza (Phillipa Soo), who marries Alexander, is saved from being reduced to a passive, suffering figure by the emotional richness of her songs.

Still, the personal and the political don’t entirely balance. “Can we get back to politics?” Jefferson demands after an especially somber episode in Hamilton’s family life, and it’s hard to keep from sharing his impatience. The biographical details are necessary to the structure and texture of the show, but it is fueled by cabinet debates and pamphlet wars, by high rhetoric and back-room dealing, by the glory and complexity of self-government.

Again: This isn’t a textbook. Liberties have been taken. Faults can be found. The problem of slavery isn’t ignored, but it has a way of slipping to the margins. Jefferson’s ownership of slaves is cited by Hamilton as a sign of bad faith (“your debts are paid because you don’t pay for labor”), but Washington’s doesn’t come up.

“Hamilton” is motivated, above all, by a faith in the self-correcting potential of the American experiment, by the old and noble idea that a usable past — and therefore a more perfect future — can be fashioned from a record that bristles with violence, injustice and contradiction. The optimism of this vision, filtered through a sensibility as generous as Miranda’s, is inspiring.

It’s also heartbreaking. One lesson that the past few years should have taught — or reconfirmed — is that there aren’t any good old days. We can’t go back to 1789 or 2016 or any other year to escape from the failures that plague us now. This four-year-old performance of “Hamilton,” viewed without nostalgia, feels more vital, more challenging then ever.

Its central questions — “Who lives, who dies, who tells your story?” — are staring us in the face. Its lyrics are an archive of encouragement and rebuke. Over the years, various verses have stuck in my head, but at the moment I can’t get past the parts of “One Last Time” that are taken, word for word, from Washington’s farewell address, ghostwritten by Hamilton. And I can’t escape tears when the outgoing president hymns “the sweet enjoyment of partaking, in the midst of my fellow-citizens, the benign influence of good laws under a free government.”