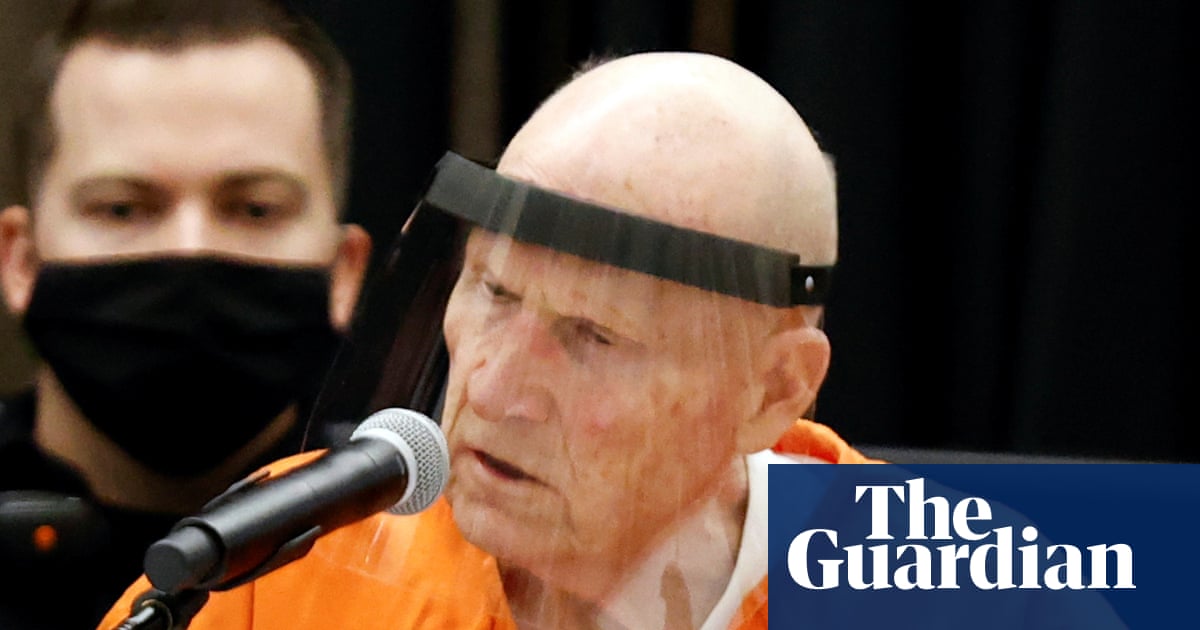 Forty years after a suburban rapist terrorized California in a series of assaults and killings, a 74-year-old former police officer has pleaded guilty to being the elusive Golden State Killer.

Joseph James DeAngelo, 74, pleaded guilty on Monday to a wave of crimes stretching back to the 1970s, including 13 murders and 13 kidnapping-related charges throughout California, and admitted to dozens of sexual assaults that he could not be criminally charged with.

Under terms of the plea deal, DeAngelo will face a sentence of life in prison without the possibility of parole.

‘I pray it will finally be over’: Golden State Killer survivors hope guilty plea brings justice

The plea deal spares DeAngelo any chance of the death penalty. Prosecutors who had sought the death penalty cited the highly complicated case and the advancing age of many of the victims and witnesses in agreeing to consider the plea bargain.

DeAngelo was arrested in 2018 after law enforcement compared DNA from the crimes committed in the 1970s and 80s across 11 California counties with that of users on the open-source genealogy website GEDMatch.

Law enforcement had spent decades trying to solve the crimes. It took years for investigators to connect a series of assaults in central and northern California to later killings in southern California. Authorities eventually settled on the umbrella Golden State Killer nickname for the mysterious assailant.

The Sacramento county prosecutor Thien Ho said DeAngelo made incriminating statements after his 2018 arrest, claiming he was driven by an internal force he couldn’t control.

“I didn’t want to do those things,” DeAngelo said, according to Ho, “I destroyed all their lives. So now I’ve got to pay the price.”

Ho said the day had come for DeAngelo to pay that price.

“The scope of Joseph DeAngelo’s crimes is simply staggering,” Ho said, including nearly 50 rapes. “Each time he escaped, slipping away silently into the night.”

The case gained renewed attention in 2016 when the Sacramento district attorney announced the creation of a taskforce to identify the killer and the FBI put up a reward of $50,000 for information leading to his capture.

The scope of the crimes, and long-unidentified perpetrator, drew particular interest from the true crime community and spawned dedicated discussion boards. I’ll Be Gone in the Dark, a bestselling book about the true crime writer Michelle McNamara’s search for the Golden State Killer, brought wide attention to the case when it was released months before DeAngelo’s arrest.

To provide for social distancing, Monday’s hearing took place in a ballroom at Sacramento State University that was made to look like a state courtroom with the seal of the Sacramento county superior court behind the judge’s chair.

DeAngelo was wheeled into the makeshift courtroom wearing a clear face shield and spoke in a hushed, raspy voice.

For many survivors, DeAngelo’s plea comes with mixed emotions as well as a fear that he could opt out of the agreement at the last moment.

“It’s a difficult place to be in, to know that at any time he could change his mind and that he is highly manipulative. I won’t believe anything until it is written in ink and approved,” Hardwick said.

DeAngelo is a US navy veteran of the Vietnam war and father of three and had worked as a police officer in communities near where the crimes took place. He had worked as a police officer in the Central Valley town of Exeter from 1973 to 1976 and was fired from his job at the Auburn police department in 1979 after allegedly shoplifting dog repellent and a hammer from a Pay ’n Save store. He later on worked at a Save Mart distribution center, the Sacramento Bee reported, and was reportedly living with his daughter and grandchild on a quiet street in a suburb of Sacramento when he was arrested in 2018.

DeAngelo’s victims expect to confront him at a sentencing hearing in August.

Ahead of Monday’s guilty plea, many felt a mix of emotions. “I’m going to be really happy to have this be done. I’m tired of him having any real estate in my head,” said Jennifer Carole.

Carole’s father, Lyman Smith, and his wife, Charlene, were bludgeoned to death in their Ventura home in 1980 when Carole was just 18. Her 12-year-old brother discovered the bodies. The family didn’t learn the crime was the work of a serial killer for 20 years, and it was only after DeAngelo’s capture that Carole realized the extent to which the murders had affected her life.