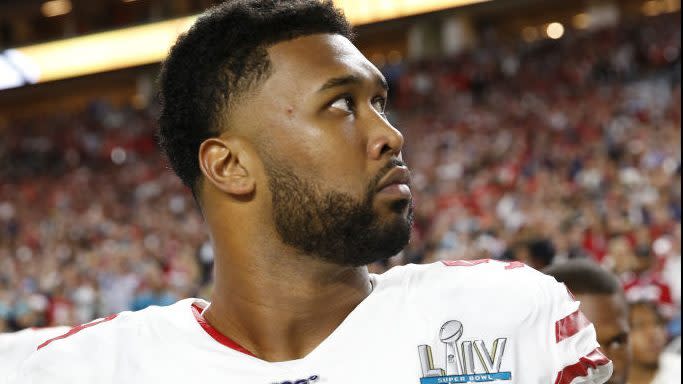 By not being able to meet his new teammate in person, Colts linebacker Darius Leonard has been forced to get to know DeForest Buckner by watching tape.

And he likes what he sees.

Leonard said during an appearance on NFL Network that adding the former 49ers defensive tackle could make an immediate difference for their defense.

“Having DeForest come onto the team and help our defense out, he’s a complete dog. Watching his tape, he has a motor that doesn’t stop,” Leonard said. “You can not just focus on the linebackers, we got so many defensive linemen now that are gonna eat up on any offensive line that’s in front of us. I think that’s gonna allow the linebackers to run around, make more plays, take some stress off the defensive backs because they don’t have to stay in coverage so long.

“I’m definitely looking forward to him coming out here and, you know, bring that dog mentality that he’s had and help this defense win and be the number one defense in the NFL.”

The Colts paid dearly for the privilege, giving up a first-round pick and then giving Buckner a four-year, $84 million contract. But they’re hoping the returns on that investment are as large as he is, and that he rubs off on his new teammates.