When it comes to taboo subjects on screen, period sex serves up a double whammy. Intercourse and menstruation – who wants to see that, right? Certainly not Hollywood. In the history of cinema, the vanishingly rare instances of sexual flow-down are portrayed with more focus on the horror of women “surfing the crimson wave”, as Cher from Clueless puts it, rather than reducing the stigma.

Who can forget the moment, in both the original 1976 Carrie and 2013 remake, when the titular heroine is terrified when she discovers blood coming out of her vagina in the school showers? A similar scene of fright occurs when Brooke Shields’s young castaway Emmeline gets her period for the first time in The Blue Lagoon (1980), while Ginger Snaps (2000) wraps a teen’s transformation into womanhood with becoming a werewolf. It’s even implied that Ginger gets attacked because the wolf, to quote Brick Tamland from Anchorman, “can smell the menstruation!”

In recent years, however, movies like 20th Century Women and American Honey, both released in 2016, have tried to combat the culture of period-shaming. The latter movie, written and directed by Andrea Arnold, sees Sasha Lane’s character remove her tampon before having sex; a quiet gesture that speaks volumes for the reality of the feminine sexual experience as well as positioning intercourse from the female perspective.

“We need to grow up about periods being a normal and very regular part of our lives – including in the bedroom,” says Emma Barnett, broadcaster and author of Period. It’s About Bloody Time in which a chapter is dedicated to the subject of period sex. “Anything which depicts period sex as part of life and debunks myths and doesn’t use the scene as another chance to show menstruating women as dirty or weird – but just a woman having what is a very humdrum regular biological occurrence – can only be progress and a good thing.”

New indie comedy Saint Frances fits this definition perfectly. In an early scene, our lead Bridget (played by the film’s writer Kelly O’Sullivan) wakes up after a night of passion to find blood on hers and her male sexual partner’s face. Bridget initially feels awkward, but soon the pair laugh it off as they change her bloody bedsheets. It becomes a sweet statement of intent for the rest of the story that will deal further with menstruation as well as motherhood and abortion. 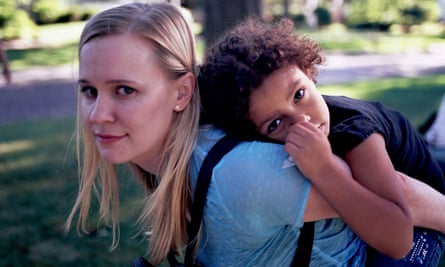 “It was important for me to say from the very beginning, ‘This is the movie that you’re in for and we’re not going to shy away from women’s bodies,’” O’Sullivan says. “If people are going to have sex with each other this is going to come up every fourth week and I wanted to portray it in a way that was an exploration of intimacy.”

The writer-actor laments the lack of films dealing with this subject, though recalls an episode of Sex and the City in which the character Samantha, fearing she was going through menopause, is relieved for her period to come on during sex, though her male partner is “horrified” by the discovery. “If somebody is an asshole about you having a period during sex, they’re gonna be an asshole in general,” she says. “But there is a discussion that’s emerging into the zeitgeist about period sex and about how different people react to it: the shame that some people are made to feel about it but also the acceptance that other people have.”

Most of our pushback was from men, but we were unapologetic

“Many women report this being one of the times they’re most interested in having sex outside of ovulation, and orgasms have been shown to help ease period pains,” says Frances Rayner, founder of the Clit Test – a campaign to change the way sex is portrayed on screen. “I think we’ll quickly start to see this change as women slowly gain power in all aspects of content production.”

Television has done a better job at dealing with the subject and that might be due to the increasing number of female showrunners. Lena Dunham’s Girls, Marja-Lewis Ryans’s The L Word: Generation Q and more recently, Michaela Coel’s I May Destroy You, offer open depictions of period sex that have each earned praise from viewers.

“Periods are something so normal – it’s weird to see how it’s been stigmatised to be something strange when it happens,” says I May Destroy You star Weruche Opia. “It was shocking to see the things that you would talk about with your friends, but not actually see on television, in the script.

“It’s a brilliant show of Michaela’s work to be able to be very frank and bold about it.”

“The great thing about being an independent film, it’s not filmed by committee,” O’Sullivan says. “You don’t have to get the OK from 100 people in a way that you do if you’re a studio film or network show.

“So we had some lovely investors who asked if there had to be so much blood and we were like yes, because, thematically, the core of this film is about acceptance and it’s something that women have been told for the longest time is dirty or shameful,” she adds. “Most of our pushback was from men but we were unapologetic.”

O’Sullivan hopes that her film will inspire both men and women to become active participants in the normalisation of period sex both on-screen and in real life too.

“It’s really important that if there is going to be a progressive movement it can’t be one-sided,” she says. “It’s too much work for just women. We need the other half of the population to hurry up and come along with it.”

• Saint Frances is released on 10 July.