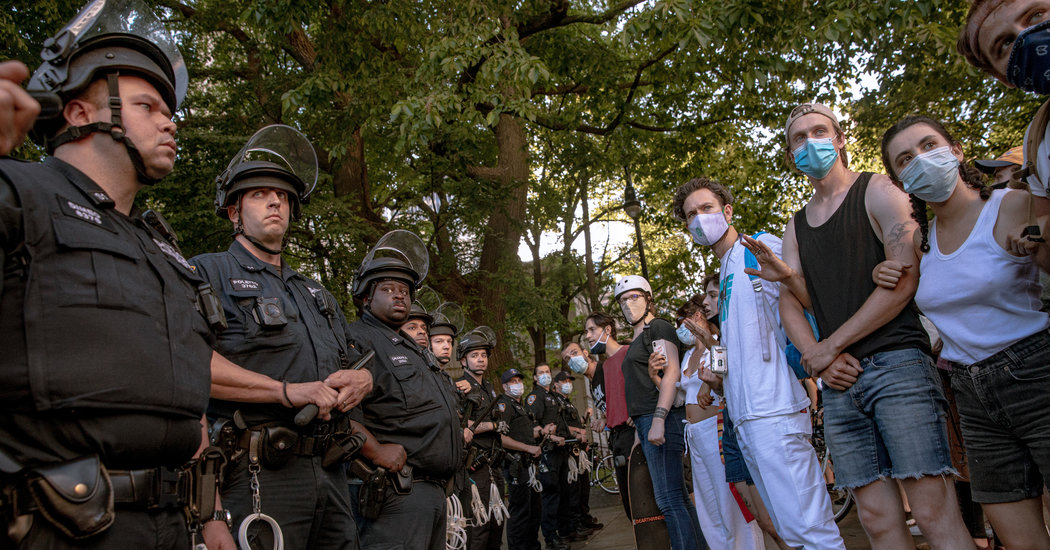 New York City officials on Tuesday agreed to a grim coronavirus-era budget that will sharply curtail municipal services, impose a hiring freeze and, in a move meant to placate calls to defund the police, shift $1 billion from the Police Department.

The $88.1 billion budget reflected the economic shutdown that followed the outbreak, causing a $9 billion revenue shortfall that forced the city to make drastic across-the-board spending cuts.

But the virus was not the only external factor that affected the budget.

The protests that followed the police killing of George Floyd in Minneapolis led to calls to defund the police around the nation, including in New York City, where protesters have gathered at City Hall since last Tuesday and have organized demonstrations outside the homes of City Council members.

Mayor Bill de Blasio and the Council speaker, Corey Johnson, agreed in principle to cut $1 billion from the Police Department’s $6 billion operating budget, but to do so successfully — especially when crime and shootings are rising — would be a tricky “balancing act,” the mayor said on Tuesday.

Sure enough, the details pleased no one.

The city decided to cancel its planned July class of police cadets, which Mayor Bill de Blasio said would reduce police head count by roughly 1,160 officers after attrition, and to shift monitoring of illegal vending, homeless people on the streets and school safety away from the police.

Several City Council members said they would vote against the budget on Tuesday evening; it was still expected to pass.

Advocates of overhauling the Police Department argued that the cuts did not go far enough. City Council members were divided; some agreed, while others contended that police funding should not be reduced when crime is rising.

“Black folks want to be safe like everyone else, we just want to be respected,” said Councilman I. Daneek Miller, co-chairman of the Council’s Black, Latino and Asian Caucus, who opposed reducing the size of the Police Department. “We can’t allow folks from outside our community to lecture us about Black lives and what we need in our communities.”

Mr. Johnson said during a virtual news conference that he felt caught between the demands of conflicting groups, constricted from doing what he had set out to do.

“To everyone who is disappointed that we did not go further, I want to be very honest and candid: I am disappointed as well,” Mr. Johnson said.

As it now stands, Mr. de Blasio may have agreed to eliminate the incoming July class of officers, but another officer class is still poised to start training in October. The rest of the city’s work force, except for those in health and safety roles such as firefighters and paramedics, will remain in a hiring freeze for the next year.

“If we have a hiring freeze for every single city agency, that should include the N.Y.P.D.,” Jumaane Williams, the city’s public advocate, said during an appearance Tuesday morning.

Mr. Williams vowed to use what power he has to obstruct the fiscal plan, unless City Hall imposed a true hiring freeze on the Police Department.

Others described the $1 billion police cuts as nothing more than smoke and mirrors. The critics ranged from prominent Black activists, elected officials of color like Representative Alexandria Ocasio-Cortez, and longtime mayoral allies, like the actress and former candidate for governor, Cynthia Nixon.

The move simply means that the Department of Education will now operate a program it had already been underwriting.

“If you are not spending the money on that agency, if money that agency was planning to spend is no longer in their budget, that is savings by any measure,” Mr. de Blasio argued, during a news conference on Tuesday afternoon.

The mayor and Mr. Johnson are also projecting the Police Department will be able to reduce its overtime costs by $350 million, but it is not clear what basis he is using for that projection, especially when officers are policing frequent protests and crime is rising.

“He’s really just moving money around and he’s not really meeting the demand of the campaign,” said Anthonine Pierre, the deputy director of the Brooklyn Movement Center, who has joined protesters in front of City Hall to demand Police Department cuts. On Tuesday morning, those protests became more confrontational, which Ms. Pierre said underscored the need for more radical change.

Mr. de Blasio said New Yorkers should have faith in the Police Department’s ability to control overtime because the department is well-run.

“Good management, and we have very good management at the N.Y.P.D. now, finds ways to use overtime when absolutely needed, but not overuse it,” Mr. de Blasio said.

Mr. Williams, a leading New York City progressive whom some activists want to draft for mayor next year, is unconvinced.

On Tuesday, he pointed to an obscure provision in the City Charter that requires the public advocate to sign a warrant authorizing the collection of real estate taxes, which underpin the city’s budget. He said he would not sign that warrant unless the city eliminated the next class of police officers.

No public advocate has refused to sign the warrant, and it is unclear if his threatened action would actually stop the city from collecting taxes. N.Y.U. law professor Roderick Hills described Mr. William’s analysis of the City Charter provision as “completely absurd.”

The budget itself is taking place in unprecedented times. New York City has had to close a yawning $9 billion budget gap wrought by the near-cessation of economic activity during the pandemic. The city is only slowly beginning to reopen, and its economic future remains murky.

The budget includes $1 billion in labor savings that Mr. de Blasio has yet to figure out how to achieve. He’s warned that the city may have to lay off 22,000 employees in October, should it not achieve labor efficiencies in other ways. He also continues to plead with the federal government for aid and with the state for additional borrowing authority.

To close the gap, he has for the first time had to draw down on financial reserves. He has eliminated the city’s popular composting program and on Tuesday confirmed that he would cut $65 million in funding for Fair Fares, which subsidizes mass transit fares for low-income New Yorkers.

On Tuesday, Mr. de Blasio was asked about those critics who argue the Police Department budget cuts are just a sleight of hand.