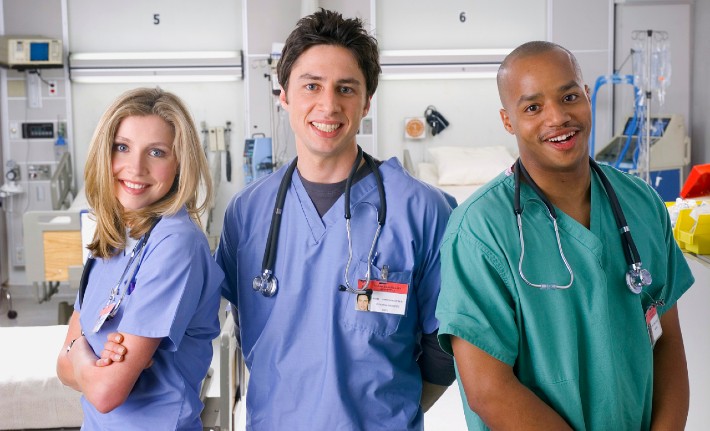 Scrubs was just one of several shows that saw old episodes removed from streaming services over blackface, joining The Office, Community and even The Golden Girls as classic shows that have had their content altered or removed in recent days. But according to Scrubs showrunner Bill Lawrence, the episodes removed due to blackface may return to Hulu after those scenes are properly edited out.

As TV Line noted, Lawrence apologized for the show’s use of blackface on Fake Doctors, Real Friends, the Scrubs-based podcast (started by show stars Zach Braff and Donald Faison) that deals with both the show and topics in the present.

One of the podcast’s episodes, called Our Difficult Past, featured a discussion of episodes that featured blackface, including one where J.D. wore blackface at a party and another where he and Sarah Chalke’s character wore makeup to look like Turk in fantasy sequences. He apologized to Braff, Faison and Chalke for putting them in an uncomfortable position, describing himself as the “gatekeeper” of what happened in the series as showrunner:

“The reason why that word ‘showrunner’ exists in television is because you’re the gatekeeper, and anything that gets allowed on a show you ultimately have to take responsibility for,” Lawrence said. “So, first off, super sorry that any of you guys had to deal with any stuff because… even though we’re all friends and it was a super creative and reciprocal environment, you guys still, at the end of the day, did and were receptive to doing whatever stuff we told you [to do].”

He also noted that the episodes in question could reappear on the streaming service after editing, which has happened to an episode of The Office last week. Lawrence didn’t confirm that it would happen, but essentially said it was possible:

During the 42-minute discussion, Lawrence also suggested that the episodes depicting blackface will “probably” return to Hulu after he has the chance to remove the offensive material. “Twitter is like, ‘Why did you pull the whole episodes?’ Why didn’t you just edit those moments out and put them back on?’ And I said to one person, ‘It’s a pandemic. I don’t really have an editing facility up right now.’ I’ll probably do that, but the first thing I wanted to do was get them off TV because it bummed me out personally,” he said. “It just made me feel sh–ty.”

Based on that comment it may take a while for those episodes to return, but it seems Lawrence is doing his best to acknowledge why they were removed and take responsibility for the trope’s use in the show. You can listen to the full episode of the podcast and conversation between the show’s creator and its stars here.