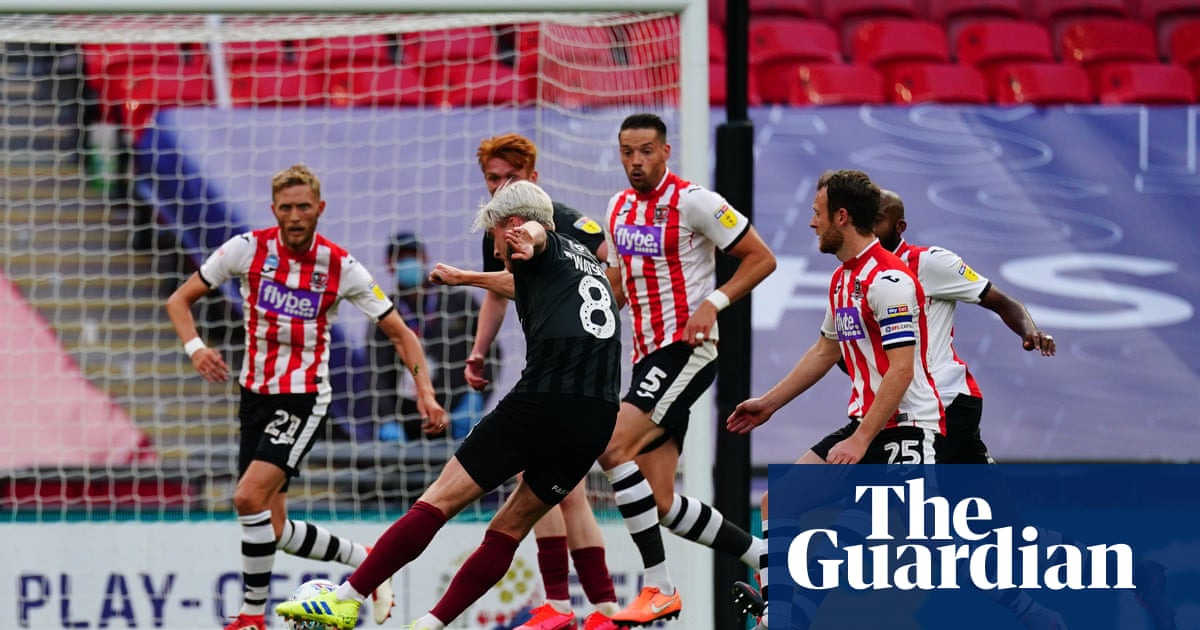 Northampton Town will play in League One next season, whenever that might be, and rarely can a win in this fixture have been so comprehensive.

This was a brutal, utterly convincing disposal of an Exeter side who were simply overwhelmed throughout. First-half goals from Ryan Watson and Callum Morton always looked like being enough, especially when Dean Moxey was sent off, but when Sam Hoskins and Andy Williams added further blows it seemed a fairer reflection. Keith Curle’s side return to the third tier after two years away; for Exeter, it is a third defeat at this stage in four seasons.

Empty stadiums are a thoroughly worn topic by now but it was disconcerting to see Wembley Way, usually a bubbling throng of anticipation and angst at this time of year, deserted on a play-off final day. It felt like another step into uncharted territory and so did the sight of the sides emerging to a ripple of applause from club dignitaries.

At least something about the past fortnight chimed with the end-of-season shootout: both sides had navigated typically topsy-turvy ties to qualify, Exeter overturning a deficit against Colchester while Northampton scored three at Cheltenham having lost 2-0 at home.

A frenetic opening spell suggested the trend might continue and it duly brought Watson’s early goal. Northampton had already served notice that Charlie Goode, their captain, would hurl booming throw-ins towards Exeter’s six-yard box given the chance when they indirectly made one count.

Although it was half-cleared to the edge of the area, Watson neatly moved the ball on to his left foot and drilled low past Jonathan Maxted via a slight deflection. Where one half of the national stadium would usually have rejoiced, the other gasping in horror, around 3,000 cardboard cut-out fans swayed in the evening breeze.

Exeter’s contingent included a likeness of the Coldplay singer Chris Martin but it offered little obvious motivation. They were battered for the rest of the half, struggling to handle such direct, aggressive opponents and looking jittery every time early balls were aimed into their area. Maxted parried a Nicky Adams free-kick and watched as Vadaine Oliver, a towering menace at centre-forward, looped a header on to the roof of the net.

A degree of respite looked possible when Adams, the influential winger, was withdrawn through injury but Northampton doubled their lead with the next action.

Unsurprisingly it came after duels were won in the Exeter box, Scott Wharton nodding a long free-kick across and Jordan Turnbull helping it on. Morton, a striker on loan from West Brom, was perfectly placed to touch in.

Before half-time Wharton, twice, Oliver and Goode all made Maxted work splendidly after rising highest. Exeter had simply not coped.

Alex Bowman had squandered their best opening amid that barrage, losing control at the critical moment. Suggestions they had discovered some edge early in the second period were tempered by the fact that, as Morton showed by tracking back 50 yards to thwart a promising right-sided move, Northampton remained so much more intense.

When Moxey tried to change that, he simply reduced their chances of a comeback to zero. Watson had just been booked for a foul on Randell Williams and perhaps Moxey, the 34-year-old, felt retribution was merited. But his tackle, thundering in recklessly as Watson sized up a pass in midfield, was vicious and impossible to excuse. It was the simplest of straight red cards for the referee, Michael Salisbury, to brandish.

Morton slotted wide shortly afterwards but it did not matter. With 10 minutes left Morton harried Aaron Martin into an error, meaning Mark Marshall could blaze a trail before cutting back for Hoskins to convert. Any lingering doubts were eradicated and Williams then scored with his first touch, from another long throw, straight after coming on. It had been a meeting of men and boys.