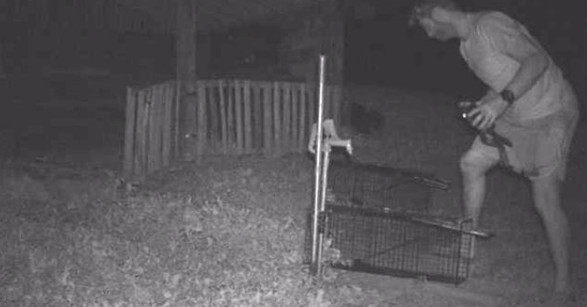 There’s a murderer on the loose, and former NFL quarterback Jay Cutler is on the case. Over the last four days, Cutler has taken to his Instagram account (@ifjayhadinstagram) to try and solve the mystery that has taken over his Nashville, TN farm.

“We’ve got a chicken serial killer on the loose. We’ve lost quite a few,” Cutler said via Instagram story on June 25. “Tonight we’re going to set up a trail camera. See if it’s a coyote, bobcat, I don’t know, raccoon. Could be anything. Not sure, but enough is enough. These ladies [the chickens] are a little edgy.”

Cutler thought perhaps it was an inside job at first, turning the camera on a cat hanging out among the chickens. “Thelma, over there — while she looks nice and sweet — is a savage with loose morals.”

“I hope you don’t show up on camera tonight,” Cutler told Thelma.

She didn’t, and a public apology was issued the following day:

By the next morning, the movement to find the killer took flight. Cutler partnered with Christensen Arms, promising a Ranger-22 and a $1000 gift card to the company’s online store if you could accurately guess the culprit. The hashtag #SaveJaysChickens was born, and it was just the beginning of the saga.

It’s not surprising that fox, coyote, raccoon, and weasel are leading the vote as all are common in Nashville and have an affinity for hunting birds. As someone that has seen the 2009 Wes Anderson adaptation of Roald Dahl’s The Fantastic Mr. Fox multiple times (great movie, highly recommend), I can confidently say that foxes do, in fact, frequent hen houses for hunting.

But they aren’t alone either in hunting poultry or in making Nashville home. According to the Tennessee government website, Coyotes are, “…locally common due to their adaptability. They are hunted to control their damage to livestock and poultry and for their fur pelts.”

And raccoons? They’re actually pretty vicious when it comes to chickens. “Raccoons won’t eat the whole bird or even most of it; they will often just eat the contents of your birds’ crops and occasionally some of the chest,” My Pet Chicken explained in a blog post. “They are awfully destructive of your flocks’ lives without bothering to eat much of their victims.”

Despite setting up a camera on the night of the 26th, Cutler posted on June 27th that, “This can’t be real. Chicken is gone and I don’t have a picture. I have to regroup. This is insanity.”

Based on the fact that Jay’s chickens appear to be taken, and not left at the scene dead, it could rule out a weasel as the culprit.

“We’ve lost control completely,” Cutler said, visibly frustrated. “Somehow we’ve got to regain it.” Cutler laid out a new strategy of night vision in the front of the house with live traps by the coops, or the Pollo Palace as he calls it.

Cutler wasn’t optimistic with this new plan as the clock ticked past midnight into Monday with no updates. “Clearly never trapped anything in my life so I’m not confident,” he said in yet another IG update. It was soon evident that he was correct in doubting his trapping abilities. When he checked the traps this morning (June 29), they were not only empty, but the hunter was toying with him now, too.

While things aren’t going Cutler’s way at the moment, don’t count him out. Over his 12-year NFL career (10 of which he started at least 10 games), Cutler led 23 fourth quarter comebacks, good for 20th in NFL history. That’s more than Russell Wilson (21), Joe Flacco (18), Aaron Rodgers (16), and Troy Aikman (15), to put it in perspective. Sure, his teams were maybe losing more heading into the fourth quarter than those other guys, but that’s neither here nor there.

It’s unclear what the next steps are at Chez Cutler, but he hit the road to clear his head and start anew. “We are behind in this battle but we haven’t lost the war,” he said. “Everyone loves a comeback. Tonight’s the night.”

Stay tuned as we keep tracking this situation. It’s probably not a cheetah, though.