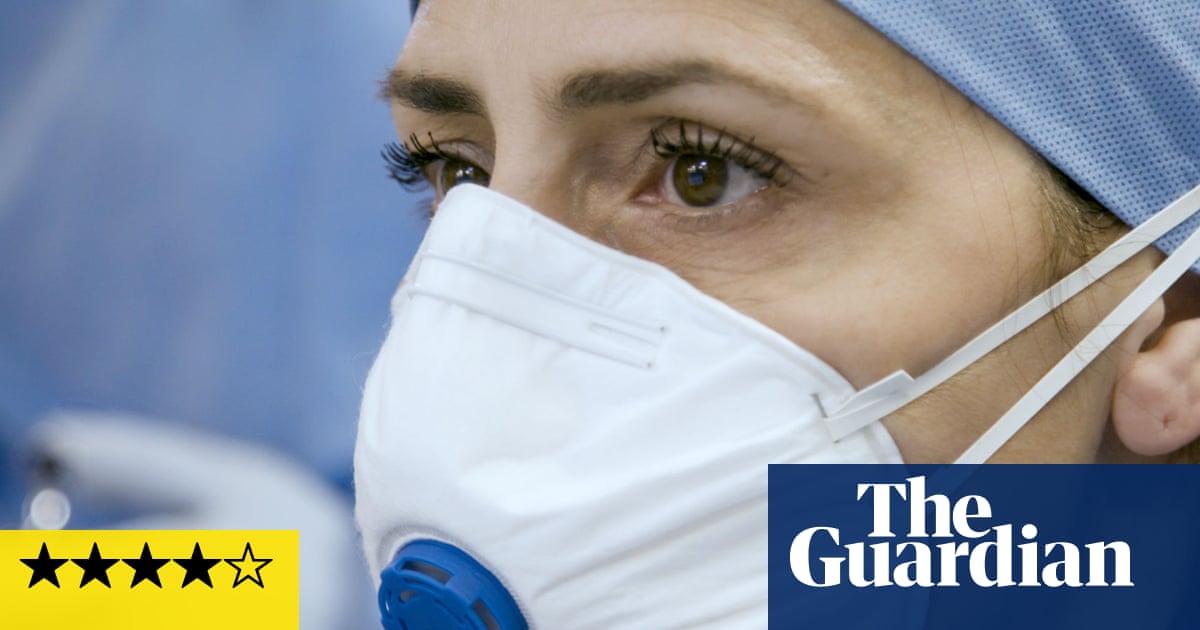 “Why didn’t you become a house painter?” Michele asked his wife, Dr Francesca Mangiatordi. He was joking, but he had a point. If Francesca hadn’t been an A&E doctor this spring in the northern Italian city of Cremona, working 12-hour shifts at a hospital overrun with Covid-19 patients, things might have been easier for the Mangiatordi family.

“We haven’t hugged each other for a month,” she said. Nor had she touched her son or daughter. That was not just sensible but remarkable, given that they live in a small flat.

The news told the Mangiatordis that Italy had overtaken China as the country with the most Covid-19 deaths. Although the director, Sasha Joelle Achilli, filmed this intimate, moving, bleak diary in March and April, the pandemic has swept on so unremittingly since that it felt like a historical document.

Francesca’s children veered between hero-worship for their mother and terror over what she might bring home. “I imagine mum like Captain America in Avengers: Endgame,” said 13-year-old Damiano. It’s not a perfect analogy – Covid-19’s endgame is more Beckett than Marvel.

Every day, his mother did battle with something beyond Captain America’s skill set. She dealt with bed and oxygen tank shortages, decided whether a 35-year-old or an 85-year-old should get the single remaining free bed, decoded lung scans and phoned the nearest and dearest to say their loved one had just died alone. “There’s no dignity any more,” said Francesca, tired eyed and tearful, to camera at the end of her shift.

“I’m scared she might bring it home not so much for me or my brother, but because of my father,” the 11-year-old daughter, Maria Teresa, confided to camera. She imagined what would happen if the virus killed her parents. “I don’t know how to cook and him neither,” she said, breaking into sobs. “Without them, we don’t know how to do anything.”

Although Francesca did not contract the virus, her best friend at hospital, Dr Laura Bocchi, did. “I’m a patient and, unfortunately, I possess medical knowledge that sometimes makes my fears worse,” said Laura. She self-isolated in her son’s bedroom. She only saw her son and husband on video calls from different rooms in the same apartment. Every now and again, Laura would appear silhouetted at the frosted glass of the bedroom door, a spectral figure in a little flat pressing a hand against glass in a futile reach for human contact.

Achilli’s genius was for capturing the quotidian human struggle for dignity against the odds. While 30-year-old Crystal awaited the result of tests in a hospital corridor, she rang her husband. She told him to go into another room so their three daughters could not hear. “I don’t know yet, Sebastian. Don’t say anything in front of the girls.”

Everyone in this documentary was so beautiful that their tragedy reminded me of the one in Nanni Moretti’s 2001 Palme d’Or winning film, La Stanza del Figlio (The Son’s Room), in which a beautiful family’s beautiful son drowns, leaving his family decorously bereft. It seemed wrong that such tragedy should afflict anyone, but doubly wrong that it should afflict them.

Add to this the fact that Achilli marginalised death and foregrounded survival, and you’ll understand my slight misgivings about the film. There was one short scene in which a corpse was taken down a dimly lit corridor to the mortuary and placed in a coffin by dignified staff. Otherwise, death was the unseen predator lurking behind these heartening stories of those who made it through.

Achilli’s film nonetheless works as a moral lesson from humanity’s better selves about how we should behave with restraint and care for others in extremis rather than, say, sullying the name of Barnard Castle or wrecking Bournemouth.

The hour-long documentary was threaded through with the story of 18-year-old Mattia, taken into intensive care with the virus engulfing his lungs. Hardly anyone made it out of the intensive care unit (ICU) with such symptoms, said nurse Cristina Pilati. His mother wrote in the local newspaper asking the nurses to do what she could not: hold him.

Ultimately, like Crystal and Laura, Mattia fought off the virus. After 12 days in the ICU, he lay chastened in a recovery bed. “I remember that I sent my last texts. I gave my phone to the doctors.” An older patient in the next bed said: “After an experience like that, what could possibly scare you? Nothing!” Mattia looked thoughtful. Perhaps, his expression said. Perhaps.