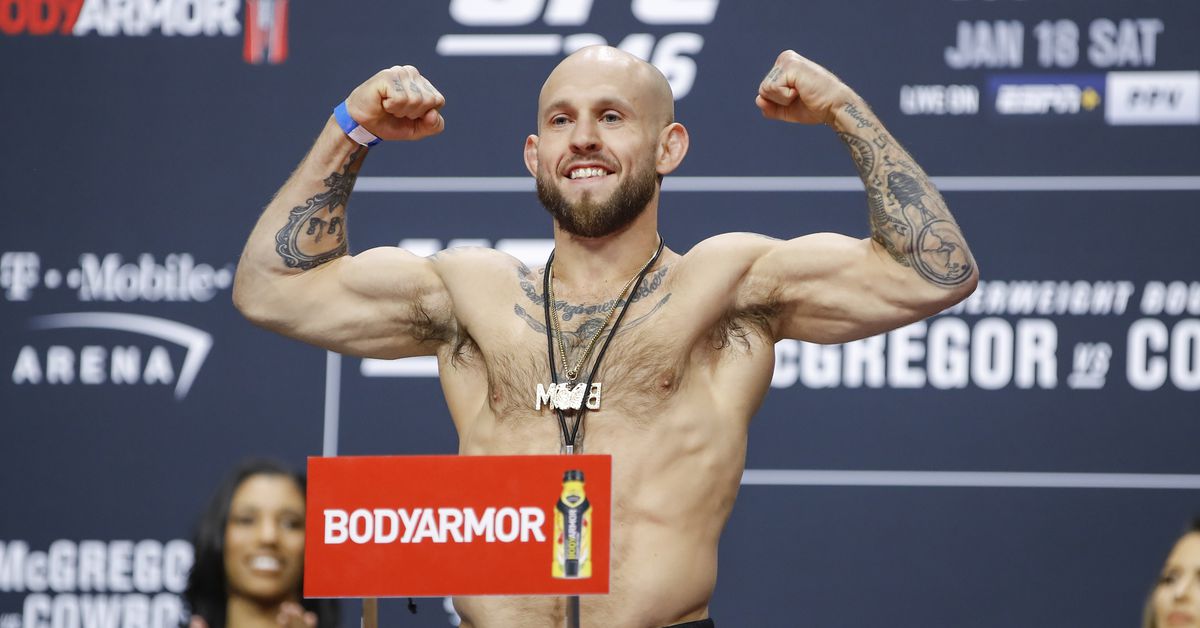 Brian Kelleher is a big believer in momentum, and he has it heading into his third fight of 2020.

With another short notice opportunity awaiting him this weekend against a ranked contender, Kelleher is reminded of the momentum “BMF champion” Jorge Masvidal was able to accumulate throughout his historic 2019.

In fact, it was an inspiration to the Long Island, N.Y., native.

“I mean, I do have ‘Street Jesus’ on my chest essentially, so there is something,” Kelleher told MMA Fighting on What the Heck. “There is something to that. There’s omens everywhere in my life, it’s kind of crazy.

“But I love Jorge and I love that story. A guy who’s paid his dues, been through the ups and downs, who very well could’ve fell off but kept yourself in the right mindset to rebound, keep winning and change things up. I know he did that reality show, he found this mental clarity and I feel like the same thing is happening to me as veteran in the sport. You get burnt out sometimes and you gotta figure out ways to change to feel that same energy you felt when you first made it to the UFC. That’s where I am right now.

“I plan to do the same thing (Jorge did) to become a star out of nowhere and put some big wins together and make it happen.”

Kelleher takes on top-15 bantamweight Cody Stamann on Saturday at UFC 250, and the featherweight bout serves on the event’s preliminary card at the UFC APEX in Las Vegas.

For the second consecutive fight, Kelleher and his scheduled opponent made the fight happen with some respectful banter on Twitter. The 33-year-old, who believes his new nickname should be “Boom Shelby,” not only is in for the opportunity to overtake a ranked opponent in a loaded division, but to also compete against a talented fighter with whom he respects.

“He’s a great fighter, and that’s who I’m here to fight,” Kelleher explained. “I want to fight guys that are ranked that can put me in position for a title. I thought he beat Song Yadong (in his last fight), to be honest with you.

“I know Cody’s wrestling background where he’s comfortable. He’s an athletic guy, but he’s not a finisher like me. I finish a lot of fights. If you look at my percentages, I choke guys out, I knock guys out, I TKO guys, I have a variety of finishes and I think that’s what makes me dangerous, more unpredictable heading into this fight.”

Stamann looks to get his hand raised for the 19th time in his professional career, and he will do so with a heavy heart following the death of his 18-year-old younger brother, Jacob late this past week.

“Spartan” bounced back from his lone promotional loss to Aljamain Sterling at UFC 228 with a one-sided unanimous decision win over Alejandro Perez at UFC 235. In his most recent fight, the 30-year-old took on Yadong at December’s UFC Washington D.C. event and fought to a controversial majority draw.

With Kelleher being the more active fighter as of late, plus experiencing the pandemic structure the UFC has put in place—including competing in empty arenas—he’s feeling very confident in taking on one of the best challenges of his career.

“For me, I know momentum is powerful,” he said. “I love it and carry it through with this amazing energy, and then going into another fight where I just experienced all of those nerves. All of that uniqueness? I just went through it so my mind and my body is like, ‘Oh… we just did this.’ I’m more comfortable doing it with the no crowd so this will be nothing different for me.

“I enjoyed it, I thought it was great having no distractions. Fight week went smooth, we arrived to the arena with not much time, get wrapped and get straight to it. I think that was beneficial to me.”

There’s no “Mystic Brian” taking the world by storm heading into the UFC’s fifth pay-per-view event of the year. When asked for a prediction, Kelleher is going with the recipe that’s lead to two straight finishes to kick off the year.

“No overthinking anything – I’m gonna go in there and be myself,” Kelleher exclaimed. “Go in there, have some fun, let it all hang out and good things will come. That’s what happened in the Hunter fight. I had fun, I started to flow, started to swag on him and in the second round, I was feeling myself.

“I know I have the power to finish anybody. My belief is at an all-time high, and I’m just so excited to keep putting on the best performances possible.”

With everything seemingly falling into place for Kelleher this year, the proverbial pot gets a little sweeter as the man he’s been calling to fight for the last several months, Sean O’Malley, will also be competing at UFC 250 against Eddie Wineland.

If Kelleher is able to pick up a win over the No. 12 ranked bantamweight in the world, O’Malley may not have any other options should he also be successful on Saturday night.

“He’s gonna have to come chase me after this,” Kelleher jokingly said. “No, but I think it’s perfect alignment. It’s crazy how it worked out and, you never know, the UFC might be plotting a little bit with timing. If both of us come off of a win on the same night, it builds the fight more. The anticipation builds.

“And I’m gonna have a little something for him. I’m a guy with a plan. I don’t like to look too far ahead, but I always have a plan.”