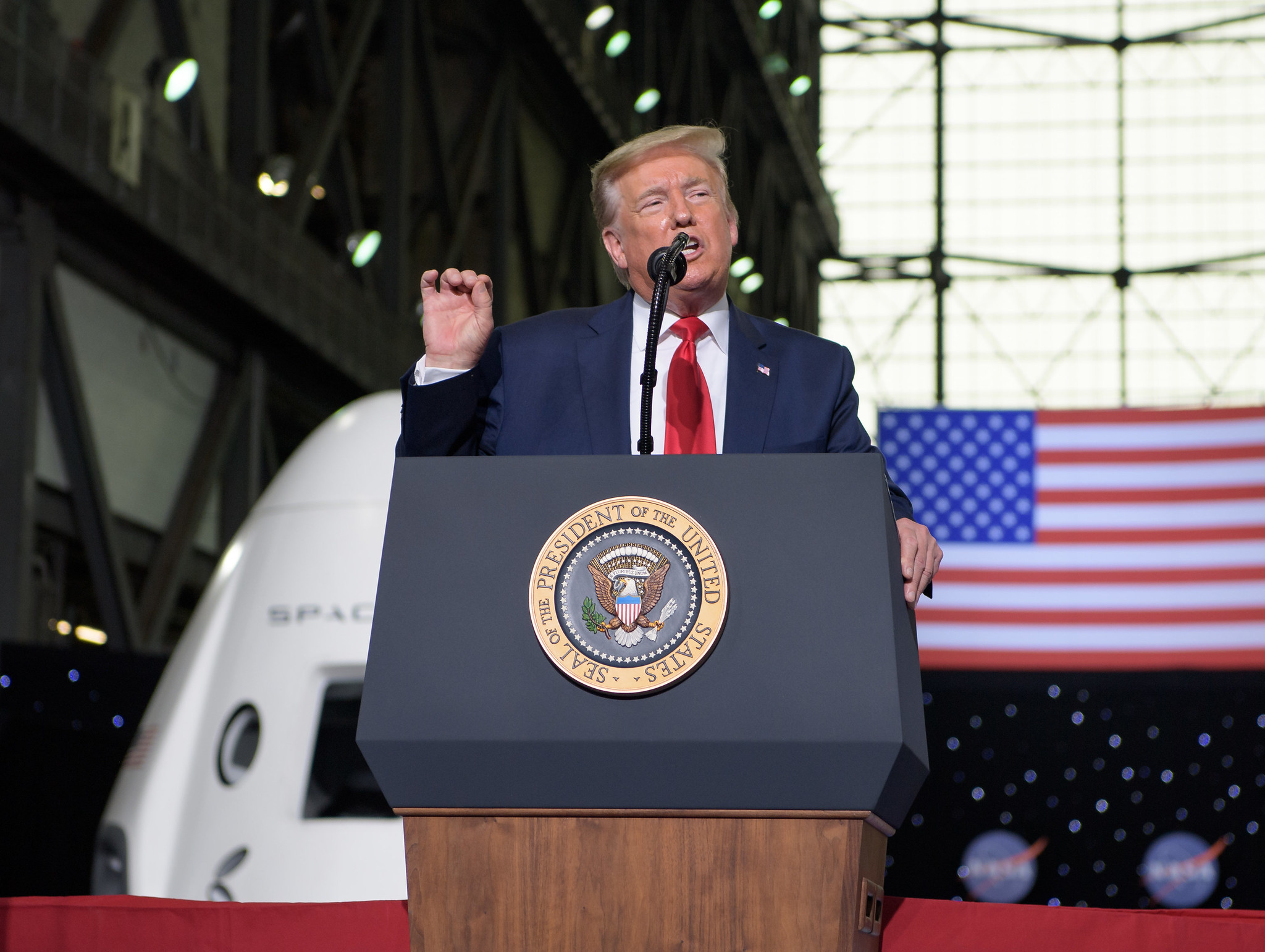 The campaign to reelect President Donald Trump launched a new “Make Space Great Again” video ad this week that has surprised NASA officials and sparked an online petition against the politicization of space.

The video, which Trump’s reelection campaign released Wednesday (June 3), shows NASA footage of SpaceX’s historic first astronaut launch, as well as scenes of NASA astronauts Bob Behnken and Doug Hurley, who flew on the test flight. It also includes a brief clip from a SpaceX Falcon Heavy rocket launch that was not for NASA and a view of CEO Elon Musk at last week’s launch.

A NASA official confirmed to Space.com that the agency was not aware of the new Trump campaign video before it became public Wednesday. SpaceX had not responded to a request for comment as of press time. A Trump campaign spokesperson told Bloomberg News that the 2.5-minute video was created from publicly available sources. A disclaimer at the end states that the video was paid for by Trump’s campaign and was approved by Trump.

Related: Presidential visions for space: From Ike to Trump

According to NASA’s advertising guidelines (which you can find here), the video may violate agency regulations by featuring footage of the joint SpaceX-NASA launch, active astronauts and NASA’s iconic logo. Those guidelines prohibit using the name or likeness of any active astronaut, like Behnken and Hurley, in advertising or marketing material.

“Astronauts or employees who are currently employed by NASA cannot have their names, likenesses or other personality traits displayed in any advertisements or marketing material,” the NASA regulation states.

NASA’s logo is also off-limits without special approval in advance, according to the regulations: “NASA does not permit use of the NASA Insignia and other NASA indicia in advertisements.” Since NASA was surprised by the campaign video, the Trump campaign appears not to have received approval from the space agency.

Petition against politicization of space

A Change.org petition, which has already gathered more than 3,000 signatures, calls on the Trump campaign to “stop politicizing SpaceX and NASA accomplishments.” The SpaceX/NASA launch last week was part of NASA’s Commercial Crew Program, the petition correctly states; that program began in 2010 under President Barack Obama and predates the current administration.

“[The video] even involves a variation [on] his campaign’s well-known slogan: Make Space Great Again,” petition organizer Andrew Harner wrote in his description of why he feels the petition is necessary. (Trump’s usual slogan is “Make America Great Again.”)

“This group of signatories,” Harner added, “stands for the position that it is wrong for this scientific achievement, as well as NASA and SpaceX video footage, to be used for political showmanship.”

The “Make Space Great Again” video, endorsed by Trump (a Republican) and paid for by his 2020 presidential reelection campaign, focuses on the Trump administration’s push to send humans back to the moon in 2024 — which, if Trump is reelected this fall, would put the landing at the end of his second term.

Included in the Trump video is footage from SpaceX’s successful May 30 launch of Behnken and astronaut Doug Hurley on a Crew Dragon spacecraft, which was NASA’s most-watched online event ever. The SpaceX mission, called Demo-2, marked the first launch of astronauts from Florida since the end of the space shuttle program in 2011.

Trump attended the launch in person, as the video shows, along with Vice President Mike Pence.

NASA picked SpaceX and Boeing to build commercial crew vehicles in 2014, two years before Trump was elected, as part of a program initiated by the Obama administration. American spacecraft replacements for the aging space shuttle were first discussed in detail during the preceding administration, of Republican George W. Bush, whose two terms ended in early 2009. During the nine-year gap between the space shuttle and SpaceX, NASA continued to fly astronauts into space by purchasing seats aboard Russian Soyuz spacecraft.

While Trump’s administration did commit to ongoing funding of commercial crew development, the Trump campaign video does not mention the earlier contributions of Bush or Obama.

“We are giving you a platform the likes of which nobody has ever been given,” Trump says in a speech in the video, playing over footage of the SpaceX launch. “Our nation of pioneers still yearns to conquer the unknown because we are Americans, and the future belongs totally to us.”

The video also includes excerpts from the famous 1962 speech by Democratic President John F. Kennedy that initiated the Apollo program. Those missions sent astronauts to the moon’s surface between 1969 and 1972, two presidential administrations after Kennedy’s. (Republican President Richard Nixon, who was in office during the Apollo moon landings, is not mentioned in the Trump video.)

“This country of the United States was not built by those who waited and rested and wished to look behind them,” Kennedy said at Rice University on Sept. 12, 1962, in a quote that plays in the Trump video over footage of the Apollo 11 moon landing in 1969. The Trump video also includes Kennedy’s more famous quote from the speech: “We choose to go to the moon in this decade and do the other things, not because they are easy, but because they are hard.”

The Trump reelection campaign released the new video as the president faces a wave of criticism for advocating force in response to ongoing demonstrations across the United States. The protests erupted after George Floyd was killed May 25 when Derek Chauvin, then a Minneapolis police officer, pressed his knee on Floyd’s neck for several minutes in the presence of other officers.

Chauvin was fired on May 26; he was arrested and charged with third-degree murder (later increased to second-degree) and second-degree manslaughter on Friday (May 29). Meanwhile Floyd’s death sparked outrage due to the long history of police brutality against Black people. On May 29, Trump posted a tweet that was flagged by Twitter’s moderators and has been interpreted as encouraging violence against the protestors.

SpaceX attempted to launch its NASA astronaut mission May 27, the day after Chauvin was fired, but scrubbed for weather. The successful launch took place the day after Chauvin’s arrest, as protests continued. During a post-launch press conference, several reporters asked NASA representatives whether the United States could celebrate the accomplishment in space given the national reckoning about race-biased police violence. After the launch, Trump began his speech on SpaceX’s success with remarks on Floyd’s death.