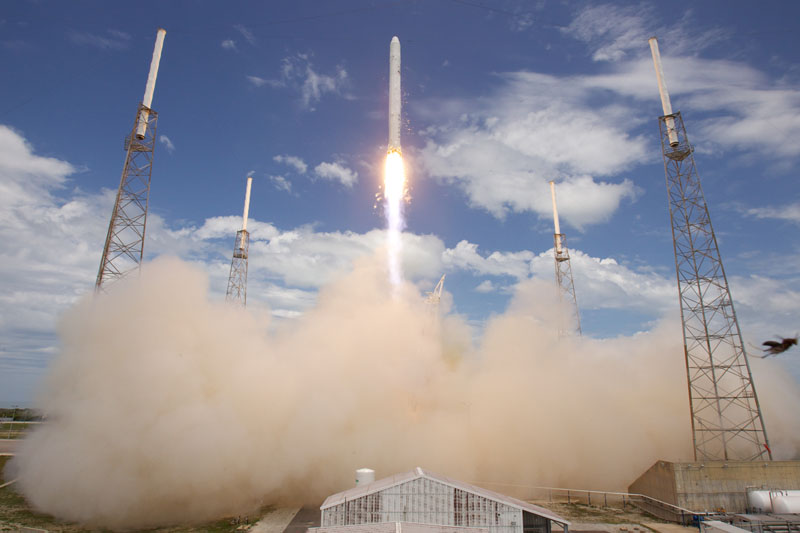 SpaceX’s famous Falcon 9 rocket has now been flying for a decade.

The mission was a big milestone for the nascent private spaceflight industry, and it set SpaceX on a stratospheric trajectory. Just six months later, the company lofted an actual Dragon to orbit and fished it out of the ocean a few hours later. No privately built and operated spacecraft had ever been recovered after an orbital mission before.

Since then, the Falcon 9 has flown a total of 86 missions, the most ever for U.S. rocket.

The Falcon 9 rocket and Dragon craft were developed with funding help from NASA, which in December 2008 awarded SpaceX a $1.6 billion contract to fly robotic cargo missions to the International Space Station (ISS) with the duo. In May 2012, Dragon reached the orbiting lab for the first time on a test flight. The capsule made its first contracted delivery in December of that same year.

SpaceX has now flown more than 20 such resupply missions to the ISS, the most recent of which launched this past March. And the company just added crewed missions to its repertoire as well.

On Saturday (May 30), a Falcon 9 launched the crewed version of Dragon, sending NASA astronauts Bob Behnken and Doug Hurley toward the ISS on a test flight called Demo-2. If all continues to go well with the mission, SpaceX will be clear to start flying contracted crewed missions to the orbiting lab. The company is committed to conduct at least six such flights, under a $2.6 billion deal it signed with NASA’s Commercial Crew Program in 2014.

Related: See the evolution of SpaceX’s rockets in pictures

Going up and coming down

The 230-foot-tall (70 meters) Falcon 9 sports nine Merlin engines in its first stage and one in its upper stage. That basic formula has remained constant over the past decade, but the rocket’s performance has changed quite a bit. The “Block 5” variant that launched Demo-2, for instance, is far more powerful than the Falcon 9 v1.0 that took flight 10 years ago.

That increased power boosts the reusability of the Block 5 compared to its predecessors, allowing SpaceX to devote more propellant to first-stage landings. The company first pulled off a Falcon 9 landing in December 2015 and now has 46 of these dramatic events, some of which occur on “droneships” at sea, under its belt. (SpaceX has also successfully landed 7 first stages of its Falcon Heavy megarocket, which is based on the Falcon 9.)

By now, some of these boosters have launched on as many as five different orbital missions. Such reuse is a major priority for SpaceX and its billionaire founder and CEO Elon Musk, who believes that reflying space hardware rapidly and often is the breakthrough needed to enable Mars colonization and other bold exploration feats.

The Falcon 9 has launched successfully more than 50 times in a row, and it can loft 25 tons (22.8 metric tons) of payload to low Earth orbit on each $62 million mission. Rocket builders around the world are now scrambling to match this combination of power, reliability and cost-effectiveness.

But SpaceX’s current position atop the commercial launch ladder was far from guaranteed. Musk has often noted that the company would have gone under if its Falcon 1 rocket hadn’t successfully reached orbit in September 2008 on its fourth try. And the 2008 NASA commercial cargo contract was another much-needed lifeline.

“Those are the two key things that saved SpaceX,” Musk said on May 30, shortly after the successful launch of Demo-2. “Otherwise we would have, you know, not made it.”

And there have been a few bumps in the road for both the rocket and the company. In June 2015, for instance, a Falcon 9 failed shortly after launching a cargo Dragon toward the ISS. And in September 2016, a Falcon 9 exploded on the pad during a prelaunch test, destroying the Amos-6 communications satellite.

The Falcon 9 will continue to fly for a while longer, but the rocket’s days are numbered.

SpaceX is already working on its Mars-colonization transportation system: a giant, reusable spaceship-rocket duo known as Starship. Musk has said he wants to phase out Falcon 9, Falcon Heavy and the Dragon capsules in favor of Starship, which will eventually shoulder the company’s entire spaceflight load.

It’s not clear yet when that will happen. But Starship will be ready to fly relatively soon, if all goes according to Musk’s plan.

“I guess I would wish that we could do it in two years,” he said on May 30, while also acknowledging, with a laugh, that he tends to be a little optimistic about schedules. “I think it’s not out of the question that it could be two years. I would be surprised if it took more than four.”