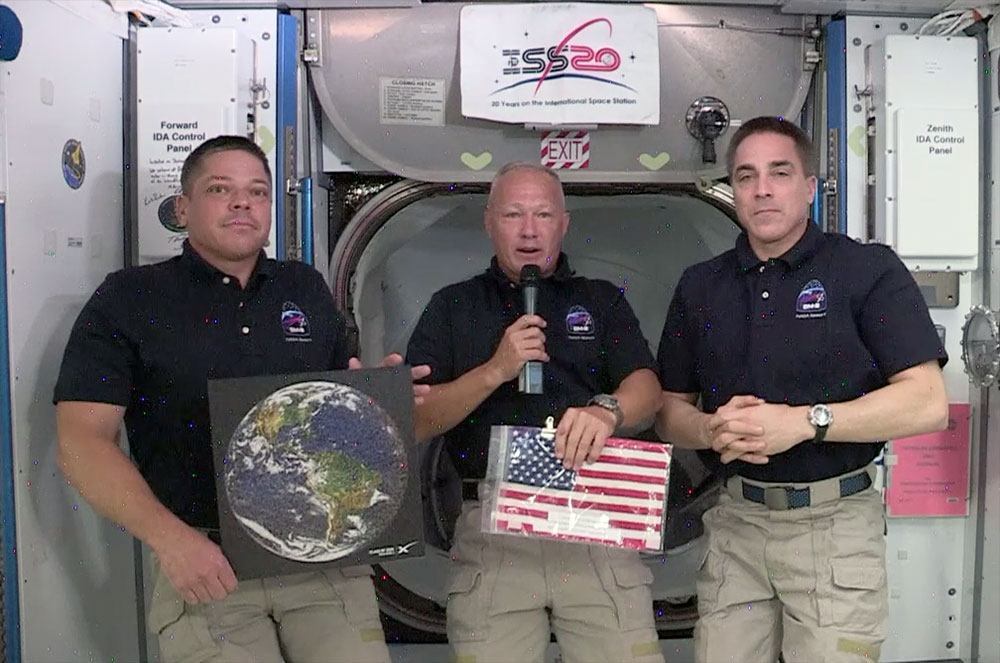 “Congratulations SpaceX, you got the flag.”

Just one day after riding SpaceX’s Crew Dragon “Endeavour” to a historic docking with the International Space Station, spacecraft commander Doug Hurley held out a small American flag for the company behind his and fellow NASA astronaut Bob Behnken’s arrival at the orbiting complex.

“This is the flag we left here almost nine years ago on STS-135. It had actually [first] flown on STS-1 [the first space shuttle mission],” described Hurley during a live downlink from the space station with Benji Reed, SpaceX’s director of crew mission management at the company’s headquarters in Hawthorne, California, on Monday (June 1).

“We decided we would have a little friendly competition to see who would come up and get this flag,” said Hurley, who as pilot for NASA’s final space shuttle mission was part of the crew who left the twice-launched flag on the space station in 2011.

“Chris had it right on the hatch where we left it nine years ago,” he said, referring to Chris Cassidy, the station’s current commander of the Expedition 63 crew.

First revealed in 2011 as the target of a high-flying “capture the flag” game, the 8-by-12-inch (20-by-30.5 centimeter) U.S. flag served as a symbolic prize for the first U.S. company to fly astronauts on a U.S. commercial spacecraft launched from the United States to the space station.

NASA contracted with SpaceX and The Boeing Company under its Commercial Crew Program. Although the space agency refrained from billing it as a formal race, it was not known until earlier this year whether the Crew Dragon or the CST-100 Starliner would be first spacecraft to launch with a crew and capture the flag.

“I think the important point is returning a launch capability to the United States to and from the International Space Station. That is what this flag really means,” said Hurley during a press conference from orbit also on Monday. “It is [also a tribute] to the thousands of people who made it possible, from the folks at SpaceX, folks at NASA and the folks within the Commercial Crew Program.”

“Hopefully this will find a great place of honor somewhere in Hawthorne,” he said. (NASA has said the flag is destined to fly again on its next crewed flight the moon, Artemis 2, targeted for launch in 2023.)

Beyond retrieving the flag and briefly considering what it represents, Hurley said that he and Behnken had not yet had the time to appreciate the history they made by becoming the first NASA astronauts to launch on a commercial spacecraft.

“Both Bob and I, over the last five years, have been pretty focused on this mission — and actually flying this mission — and I think that is really what we put our entire effort, mentally and physically, into,” Hurley said in a response to a question from collectSPACE.com. “And we’re still doing it.”

“The historical aspect is certainly notable, but I think it is something to consider after this mission is complete. We’re not even, in any way shape or form, half way through the mission yet. We’ve just docked. We’ve still got to do our mission here with Chris and then undock, depart and do a re-entry and then a landing and then a recovery. So plenty of work to do,” he said.

On Monday though, there were at least a few extra moments to play with toys and reveal one more symbolic aspect to the mission.

“Here comes Earthie!” announced Behnken, responding to Cassidy retrieving a small plush Earth doll that arrived at the space station on SpaceX’s uncrewed test flight of the Crew Dragon in March 2019. “Our intent is to bring Earthie home, if we can fashion a spacesuit for him.”

Behnken then entered Endeavour and brought out Tremor, a sequined dinosaur toy that he and Hurley brought with them aboard the Dragon. The sight of the two dolls floating together was a long-awaited scene, judging by the numerous social media posts about the duo.

Behnken and Hurley completed their show-and-tell by talking about a special piece of art that SpaceX assembled from the photos of more than 90,000 students worldwide who are members of the Class of 2020, but who could not have a formal graduation ceremony because of the ongoing coronavirus pandemic.

“This is that mosaic that was put aboard Dragon with all the virtual graduates this year,” said Hurley, holding up an image of Earth as seen from space. “We think it is amazing.”

“We just wanted to make sure you guys got to see it here on board space station,” he told Reed.

“We are all going through this shared experience and it was just wonderful that you were able to recognize all of the graduates in this special way,” said Behnken.

Click through to collectSPACE to watch astronaut Doug Hurley talk about capturing the flag for SpaceX.