Looking healthily tanned, with a warm expression, and wearing a natty yellow, green and blue Clan Gordon tartan waistcoat, he is unmistakably Charles Dickens – but as we’ve never seen him before.

The Charles Dickens Museum in London has created and released the first of a new set of colourised photographs of the writer in the run-up to the 150th anniversary of the author’s death. It is a taster of a major exhibition on images of Dickens that the museum will stage as soon as it is able to reopen after lockdown restrictions are relaxed further.

The show will include eight black and white images from the collection that have been colourised by the portrait and still life photographer Oliver Clyde. Newly revealed is an image of Dickens, aged 47 in 1859, the year he published A Tale of Two Cities.

Frankie Kubicki, a curator at the museum, said the project was about bringing people closer to the real Dickens. Although the author’s face is well-known, said Kubicki, he “suffers from the austere nature of the technology of the time he lived.

“It makes him very stiff. That is not at all what Dickens was like. He had a great sense of humour and was full of passionate energy. He absolutely loved fashion and loved quite colourful and daring clothing and of course all of that is lost in those images. That’s the power of colourising, it is putting some of that personality back.”

Kubicki said Dickens was a great walker and loved being outside and there were descriptions of him having a healthy tan. 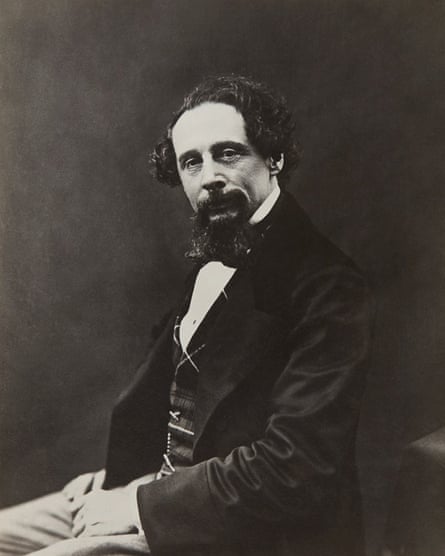 The first of eight black and white images to have been colourised was originally taken by the 19th century photographer Herbert Watkins. Photograph: Charles Dickens Museum/Oliver Clyde/PA

The project has involved Clyde studying the complexion and skin tone of Dickens’ great-great grandsons, Gerald and Mark.

Mark Dickens recalled a fun lockdown day with his 28-year-old son, Oliver, marshalling him into the different poses and taking photographs to send on to Clyde.

“It was slightly disconcerting to see the results,” he said. “It is a bit weird isn’t it but it is rather special … I think the whole concept of the project is absolutely fascinating.

“I’m sure we’ve all seen the world war one colourisation which just transformed people’s views of those soldiers. It brought them to life and that is exactly what is happening with this … it creates a character you can really identify with. It brings you much closer to him.”

The image shows Dickens wearing a crisp white shirt, navy jacket, bow tie and tartan waistcoat. One area of contention is the colour of his eyes, with different descriptions of them being blue and green. After studying the original photographs Clyde believes they were darker and possibly brown.

The biggest surprise for Clyde was the skin tone, bucking “the image of the pallid Victorian complexion by being tanned and healthy-looking”.

He added: “Seeing Dickens in colour reveals so much. You can see photographs where he clearly hasn’t run a comb through his hair for days, where his beard is all over the place or where he’s sweating after being made to stand in a hot room for hours on end.”

The photographs will be a finale to the exhibition Technicolour Dickens: The Living Image Of Charles Dickens, which explores how images of the author were consumed and circulated throughout his career and after his death. It was meant to be a highlight of the museum’s summer events and will open when the museum can open.

Situated at 48 Doughty Street, Dickens’ London residence where he wrote books including Oliver Twist and David Copperfield, the museum is completely self-funding so has found its position “particularly challenging” because of the lockdown, said its director, Cindy Sughrue.

The museum has set up an appeal on the crowdfunding site JustGiving. “I am extremely grateful for everyone who has already donated to our fundraising appeal but we’re not there yet,” Sughrue said. “We need £30,000 each month during closure to cover the basic costs of caring for Dickens’ house and the world-class collection it holds.”