João Pedro Matos Pinto was young, gifted and black, and he died last month with an assault rifle shot to his back.

“He had dreams. He wanted to be a top lawyer,” said Neilton da Costa Pinto, the father of the Brazilian teenager, whose shooting during a botched police raid has drawn comparisons to the killing of George Floyd, 9,000km north in Minneapolis.

“He always used to say: ‘Dad, one day I’ll make you proud’,” remembered Pinto, a driver from São Gonçalo, a city just east of Rio. “And I’d say: ‘I’ve no doubt about it, son.’ Because he was such a dedicated boy. He really knew what he wanted in life.”

João Pedro, who was 14, was far from the first young black Brazilian man to meet a premature death at the hands of the police. Thousands have been killed in recent years – and75% of the victims were black.

But his killing has sparked an unusually loud public outcry, amid growing fury over an upsurge in deadly police violence that continues unabated despite a government-ordered shutdown designed to combat Covid-19.

On Sunday, demonstrators will march for the second time in a week to denounce the police assaults on the favelas and what they call a state-sponsored “genocide” of Brazil’s black youth.

“This must stop,” said João Pedro’s father. “The police should be protecting us, not killing us.”

When the coronavirus quarantine was declared in mid-March activists and observers hoped police incursions into Rio’s redbrick favelas might subside – and at first that seemed to be happening. 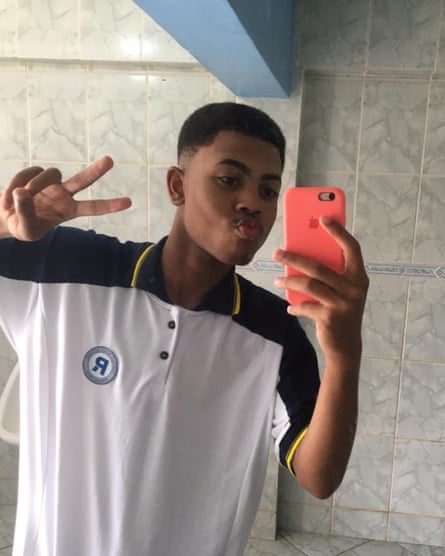 “In the first 15 days of social isolation there was a sharp drop in the number of operations and armed confrontations in the city of Rio which was really welcomed – because it’s not the time for this,” said Flávia Oliveira, a leading black journalist and broadcaster.

But by April the shooting had resumed. Rio state police killed 177 people that month alone, or one person every four hours – the second-highest tally since records began more than 20 years ago.

In May, as Brazil’s coronavirus death toll rose above 6,000, the repression continued, with 13 people killed in a single police raid on 15 May.

Three days later, João Pedro set off for his cousin’s home in São Gonçalo’s Complexo do Salgueiro as police prepared to storm the favela in search of drug traffickers.

His aunt, Denize Roza Matos Pinto, recalls becoming increasingly agitated as she watched police helicopters hovering over the seaside community from a nearby beach where she was working.

Her son and João Pedro were among six teenagers hanging out at her home and, despite the shooting, Pinto raced back hoping to protect them. Huddles of armed officers surrounded the residence, and when they finally allowed her inside she felt dread.

“The front window was full of bullet holes. The television was all shot up, the sitting room, the bedroom, everything … It was horrible … the grass was burned from the grenade they’d thrown,” said Pinto, 42.

On the floor she spotted a pool of blood where João Pedro appeared to have been shot. But there was no sign of his body which, for reasons which remain murky, had been flown 25 miles across the bay to Rio by helicopter, and was only located by the family the next day.

“All I could think of was the scene of horror those children had witnessed,” said Pinto as she reflected on her nephew’s terrifying final minutes in a building left pockmarked with more than 70 bullet holes. 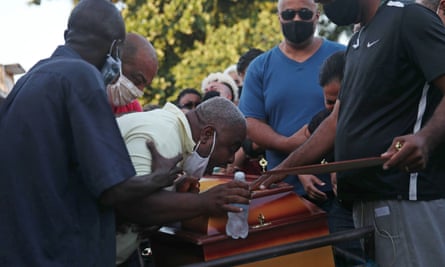 Oliveira, the journalist, said she was appalled by the upswing in “gratuitous, insane, excessive and asymmetric violence against a group of people who are even more defenseless than usual” because of the pandemic. “The favelas are already dealing with a lack of work, income and food,” she said – now they were needlessly coming under fire too.

João Pedro’s killing is under investigation. Police have reportedly claimed he was caught in the crossfire as they pursued fleeing gang members. Those close to him believe he was a victim of either police malice or gross incompetence.

“They used these kids for target practice,” claimed Gláucio Ribeira, a family friend.

João Pedro’s aunt – whose son, like the other four teens, emerged physically, if not mentally, unscathed – said she was certain race played a role in such bloodshed. “Like it or not, there is a racial side to this … and it shouldn’t be like this. We’re all supposed to be equal … [But] if you’re on the bus and the police get on, they’ll search the people of colour first … If a black man runs, he’s guilty. We’re tired of seeing this kind of thing happen,” she said.

João Pedro’s father said: “The police need to understand that the favelas are home to good people. Decent black people. But unfortunately when they come into a community they treat us all like criminals. They are wrong.”

“We’re in a bad way,” said his aunt. “We look at the sofa and it reminds us of him. We eat something he used to like and we remember him. His poor mother: he’s got a little four-year-old sister who’s always saying: ‘João liked this! João did this! Look – the cartoon that João liked to watch!’ It’s so sad to see. It feels like any minute I’ll hear his voice.”

On Monday, a fortnight after his son’s dream of becoming a lawyer was shattered, João Pedro’s father paid tribute to a happy, studious, churchgoing boy.

“The pain’s still there,” he said. “It’s like it eats you from the inside out.”