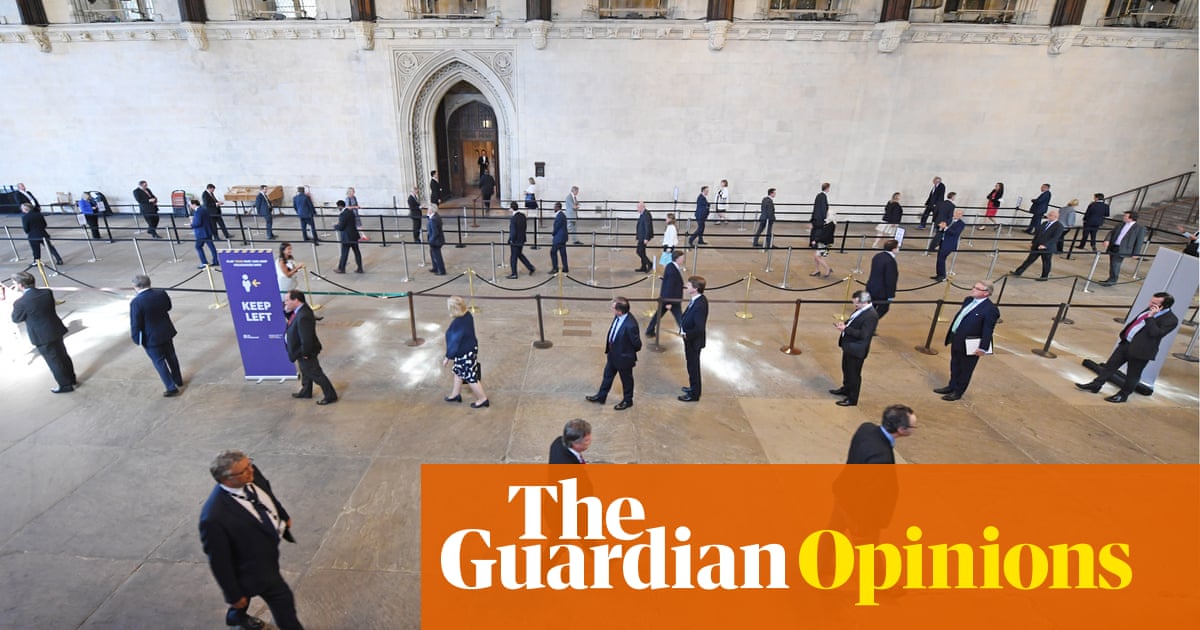 Where to start? If it wasn’t already bad enough that the UK has the highest mortality rate in Europe and Dominic Cummings is given a free pass on his midnight flit to Durham and a 60-mile round trip eyesight test, the Tory government has now decided to turn the House of Commons into the world’s worst theme park. One where the only attraction is the kilometre-long queue itself for a ride that doesn’t exist.

Some countries have used the global health crisis to discover the best of themselves. We have actively worked on becoming the worst possible iteration of ourselves. Still, at least the rest of the world can piss themselves laughing at our expense. So maybe look on it as a global public service.

To recap. Before the Whitsun recess, the Commons had a perfectly serviceable hybrid participation procedure, along with a fully functional remote voting system, to enable parliament to operate during the coronavirus pandemic. But Jacob Rees-Mogg wasn’t happy with that. Having spent several weeks trying to close down the Commons last year during the unlawful prorogation, the leader of the house has now decided he wants it to make it as inaccessible for MPs as possible.

Anyone who is over 70, is pregnant or has health, childcare or travel issues is now effectively barred from parliament. With their constituents disenfranchised. Jakey likes to pretend to be the great parliamentarian – the master democrat steeped in centuries of tradition – but the reality is that Westminster is just a stage on which he gets to cosplay his public school fantasies in a suit that’s several sizes too big for him. Ideally the only people he wants in the Commons are people just like him: MPs with large London houses, a private income and an inherited nanny.

For reasons best know to himself – perhaps he had forgotten the chamber was still restricted to 50 MPs so he would still be basically on his own during prime minister’s questions – Boris Johnson chose to indulge Jakey’s perversions by turning the vote into a three-line whip for Tory MPs. And as most of them are barely sensate lobby fodder with no mind of their own, they duly obliged by voting to deny other MPs a vote. Not for the first time in the past few weeks, the UK was putting on a good show of acting like a banana republic.

Still, at least we got to enjoy the spectacle of Tory MPs having to suffer the humiliation of waiting for 43 minutes in a queue that snaked round Westminster Hall and back into Portcullis House. I shouldn’t think Jakey and Liam Fox can remember the last time they had to queue for anything. And even when they got to the front, dozens could barely manage to blurt out their names and what they were voting for. Tory Stephen Crabb first went down the “no” side while shouting aye, before changing direction and heading for the “aye” side where he promptly said no.

It was low comedy performed by a cast of Tory grotesques who couldn’t even manage to observe the basics of physical distancing. As if they believed themselves immune to a disease that had already killed 60,000 people – with a lot of help from their own government – by virtue of their own importance. Some at least had the grace to look slightly ashamed to be participating in this profoundly undemocratic land grab but Maria Miller appeared unrepentant. Until earlier this year, Miller had been chair of the women and equalities committee but was now more than happy to trample all over those whom she used to pretend to care about. How she sleeps at night is anyone’s guess.

Unfortunately for the opposition MPs and the handful of Tory MPs with a conscience, they also had to participate in the farce. Not once but twice, as the government had to first see off an amendment tabled by the Tory chair of the procedure committee, Karen Bradley, that proposed to maintain the hybrid status quo until the end of the summer. Some managed to maintain a modicum of good humour first time round, but as the exercise in futility extended towards the 90-minute mark many began to look seriously pissed off and their votes were cast with a definite edge in their voice. Kevin Brennan spat out the words “Mogg shambles”.

Then the voting merely reflected the nature of the debate. Only this time we were seeing the “one rule for the elite, another for the rest of us” enshrined in law. It’s government policy for people to still work from home wherever possible, and here was Jakey and the rest of the cabinet actively making it impossible for MPs to work from home. If the government can treat its co-workers that badly, just imagine the contempt it has for the rest of us. Lou Reed had it about right. Give me your hungry, your tired, your poor I’ll piss on them. Your poor huddled masses, let’s club them to death.

But it was all just water off Jakey and Boris’s back: Jakey even joked about the similarities to Alton Towers by telling MPs he had taken his sister Stigmata to the theme park. An opportunity for a cynical erosion of parliamentary democracy had been there for the taking and they hadn’t been able to refuse a gift horse. There had to be an upside of the coronavirus somewhere and it could make Brexit a little less hassle. And the donkeys had just gone along with it. From now on, every vote will be a 45-minute conga, with at least a hundred or more MPs effectively excluded. The Tories have effectively taken us from a modern voting system to one that would have been rejected in the Middle Ages.

If I was an opposition MP, I’d tell any Tory asking for a pair to sod off. Make them all turn up and pray for the wettest June on record. Let it rain. Let them get soaked three times a day as the rest of the world sniggers at us. We used to pride ourselves on having the Mother of Parliaments. We’ve now just voted for the Mother of all Fuck-Ups.