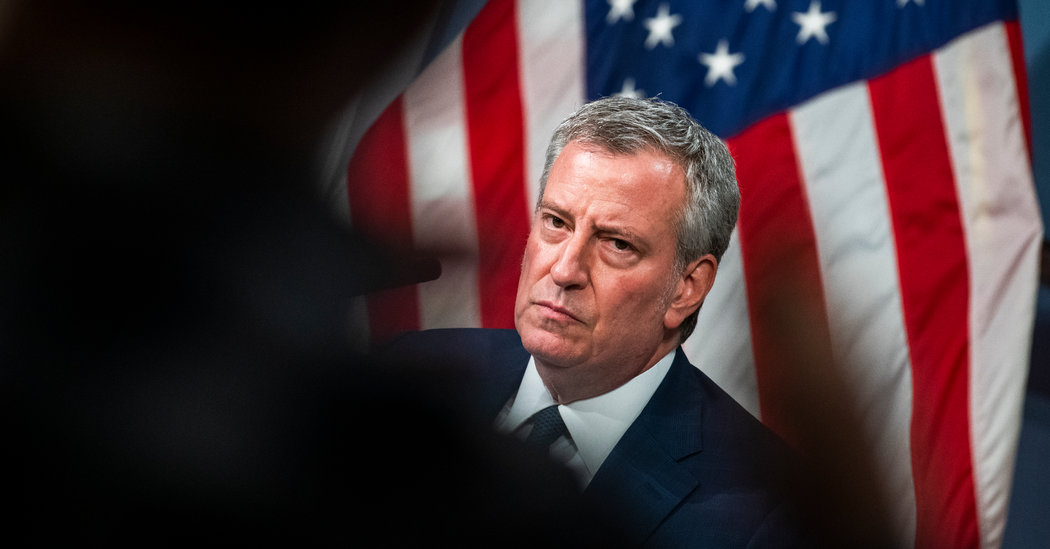 On Saturday, during the demonstrations sparked by George Floyd’s killing, two New York Police Department SUVs drove into a crowd of protesters in Brooklyn who were pelting them with projectiles. The cars knocked several people over. In aerial footage, the road behind the vehicles was mostly clear — it looked as if they could have backed up instead.

It was one of several scenes of New York Police Department violence caught on video over the last several days. On Friday, State Senator Zellnor Myrie of Brooklyn, who told my colleagues he went to a protest to try to serve as a mediator with the police, was pepper-sprayed and arrested. Video showed a police officer violently shoving a young woman to the ground; she ended up in the hospital. The next day, a cop approached a young black man who was standing with hands in the air, yanked down his mask and pepper-sprayed him.

Many of the New Yorkers who elected Bill de Blasio mayor seven years ago once thought he was made for a moment like this. In one of his campaign ads, titled “Dignity,” he spoke about talking to his biracial son, Dante, about the inevitability of being stopped by the police. A voice-over called de Blasio “the only candidate to end the stop-and-frisk era that targets minorities.”

He took office just before New York City agreed to pay $18 million to settle wrongful arrest lawsuits stemming from the police crackdown on protests at the 2004 Republican National Convention. It was hard, at the time, to imagine anything like that happening on his watch.

But late Saturday night, addressing the unrest in New York, de Blasio seemed to see the confrontations almost entirely through the eyes of law enforcement. “I’m not going to blame officers who were trying to deal with an absolutely impossible situation,” he said of the cops in the two SUVs. The next day he called for an investigation into the incident, but praised the N.Y.P.D. for showing “tremendous restraint.” It took him until Monday to forcefully condemn it.

People I spoke to who once believed in the mayor were flabbergasted. “I don’t recognize the man who was speaking on Saturday night from the guy who was campaigning in 2013,” said Rebecca Katz, a former de Blasio aide who was so close to him that he once called her “the fifth member of our immediate family.”

What happened? In part, it could just be a shift in perspective. The mayor has an obvious interest in keeping order, and some of the protests have devolved into looting and vandalism. But in several cases it’s the police who have instigated violence. If de Blasio has been reluctant to call them out, perhaps it’s because he’s been subdued by years of unremitting police hostility.

The mayor’s relationship with the N.Y.P.D. has been poisonous almost from the beginning, and now he’s caught between the demands of his base and a police force whose cooperation he needs. His mayoral legacy, already badly damaged by his handling of the pandemic, is collapsing.

In 2014, when the police killings of Eric Garner and Michael Brown fueled the Black Lives Matter movement, the city’s approach to policing protests was very different than it’s been in the last week. “The police let people march,” said Katz, adding: “Batons were not out. Pepper spray was not out.” The mayor, she said, “was more sympathetic to the protesters in 2014 than he has been this time around.”

But that December, a man named Ismaaiyl Brinsley killed two off-duty officers, saying on Instagram that it was revenge for the deaths of Garner and Brown. Many in the N.Y.P.D. blamed de Blasio for encouraging anti-police sentiment. Eugene O’Donnell, a former N.Y.P.D. officer and lecturer at the John Jay College of Criminal Justice, told me the mayor “helped get three officers murdered.”

At the funeral of one of the officers, the police turned their backs on de Blasio, a traumatic moment that changed the trajectory of his administration. He’d seen police officers nearly riot against former Democratic mayor David Dinkins in 1992 when Dinkins began the process of creating a Civilian Complaint Review Board. As if fearing a total loss of control, he became cowed.

Even now, when de Blasio appears much more inclined to take the side of the police, parts of the force are at war with him. On Saturday night, the mayor’s daughter, Chiara, was arrested while protesting on a charge of unlawful assembly.

The Sergeants Benevolent Association, a police union known for its vitriolic hatred of the mayor, tweeted out her arrest report, including personal details like her driver’s license information. “How can the NYPD protect the city of NY from rioting anarchist when the Mayors object throwing daughter is one of them,” said the tweet, which has since been deleted.

The middle ground the mayor is trying to chart between his progressive base and the police may simply not exist. “He’s not going to get anyone on his side at this point,” said Brad Lander, who occupies de Blasio’s old City Council seat. “He neither will succeed in persuading communities of color and people fighting hard for racial justice and police reform, nor is he going to have the cops on his side.”

The yawning chasm between the two camps is precisely why so many cities are on fire. It would take an exemplary leader to rise above the inferno. De Blasio, who I’ve defended in the past, is no longer even a good one.