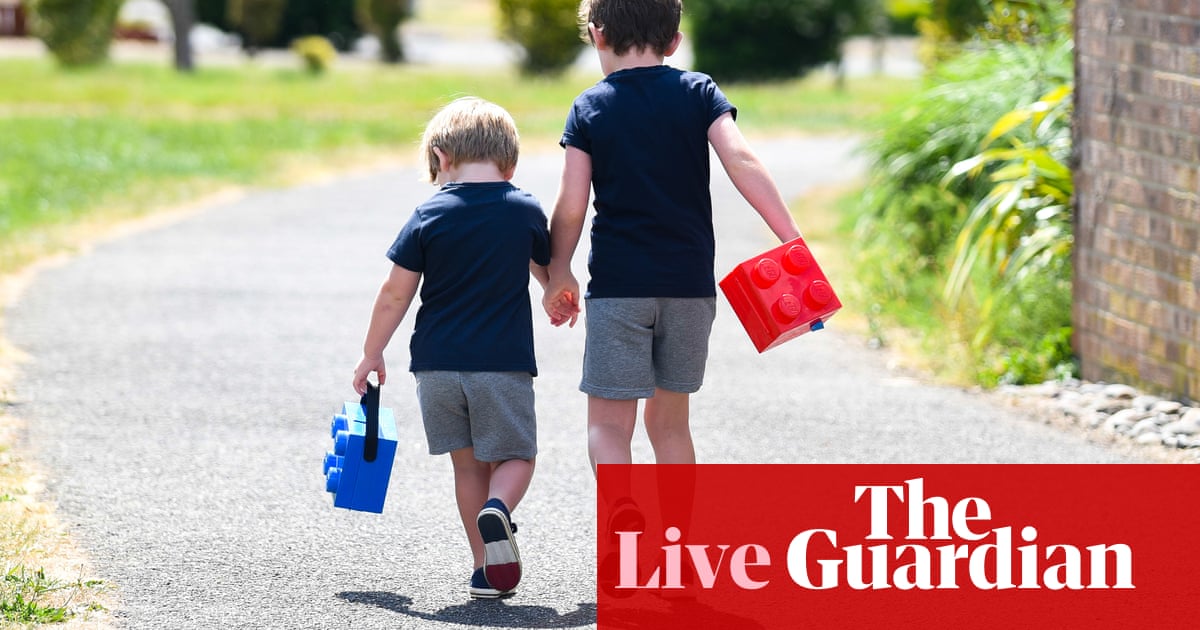 More than 200 travel and hospitality businesses have joined a campaign urging the government to overturn its planned 14-day quarantine for arrivals into the UK, PA Media reports.

The group of major hotels, travel companies and restaurateurs claim the policy is “unworkable” and are calling for air bridges to be created which enable people to travel – without being quarantined – between countries where the risk of being infected by coronavirus is deemed to be low.

This is not just a group of company bosses complaining, but employees from bottom to top calling for the quarantine plans to be quashed.

The extent of their pain is deeply worrying for our economy and our country.

More than 200 businesses have signed the letter to the home secretory Priti Patel.

The Guardian’s Today in Focus podcast is exploring the coronavirus crisis in Britain’s prisons.

When Britain went into lockdown in March, most people were confined to their homes with little more than a short daily walk allowed. But in prisons, lockdown meant an end to an already heavily restrictive way of life. There were no visits allowed, education programmes were paused and prisoners were confined to their cells for more than 23 hours a day, something close to solitary confinement.

The podcast speaks to David Adams, who has just been released from prison where he had served more than two years for a series of burglaries; and Sarah Lewis, director of Penal Reform Solutions, who describes how devastating to inmates and staff the Covid-19 crisis has become in prisons.

The business secretary, Alok Sharma, has said he understands parents’ concerns at sending their children back to school.

He told BBC Breakfast: “I completely understand every parent wants to keep their child safe. And that’s precisely what the government wants to do in ensuring schools are safe places to return to.”

Sharma is doing the government media rounds this morning, but was called out by Piers Morgan last night for apparently refusing to go on Good Morning Britain.

Sharma denied the easing of the lockdown was a “dash”, PA Media reports, insisting measures are being eased in a “cautious” approach. He told BBC Breakfast: “This is not a dash. These are very cautious steps that we are taking. They are phased.”

He insisted there is a “good likelihood” that the R rate of coronavirus infections will not go past the crucial figure of one if the public heeds the rules. “And what they also said is if people comply with the rules and the test and trace system is up and running which it has been since Thursday then there is a good likelihood that we will not breach the R value factor above one,” he said.

Primark owner Associated British Foods (ABF) said it is working to reopen all its stores in England on 15 June, following the announcement by the government allowing non-essential retailers to open their doors to customers again.

ABF expects to have reopened 281 of its stores by that date, having already reopened at 112 sites across mainland Europe.

It said in a statement:

Safety has been our highest priority in our detailed preparations to welcome our customers and employees back to stores.

We are following government safety advice in all markets. Importantly, we will apply the valuable experience gained from more than 100 stores which are already open as we open the remainder of our estate, including stores across the UK.

Social distancing protocols, hand-sanitiser stations, perspex screens at tills and additional cleaning of high frequency touch points in the store are among the measures we are implementing. Personal protection, including masks and gloves, are being made available to all employees.

Government guidance requiring 2.2 million people in at-risk groups to stay indoors is to be relaxed in England from Monday, the housing and communities minister Robert Jenrick said on Sunday.

He confirmed that people shielding will be able to spend time with their households or, if they live alone, with one person from another household.

But vulnerable people who have been shielding for many months have voiced concerns that the lockdown is being eased too quickly in England.

For the last 10 weeks, Graham Bell has been sleeping in a hotel near the Devon hospital where he works as an intensive care nurse, away from his wife and toddler triplets. His wife, Hannah Gallagher-Bell, another nurse, is shielding because of diabetes and other underlying health conditions. The triplets – William, Benjamin and Florence, who are two and a half – were born prematurely and are vulnerable to lung infections. This prompted the couple to take the agonising decision for Graham to stay out of the house in case he picked up Covid-19 on the ward and infected the rest of the family.

Hannah, who has not been able to work during the crisis because of her health vulnerabilities, has not left their house in Barnstaple since Graham packed his bags and went to a hotel on 22 March, the day before Boris Johnson put the UK into lockdown. She will not be going anywhere soon, she said: “The thought of it absolutely petrifies me.”

Five new drugs are to be trialled in 30 hospitals across the country in the race to find a treatment for Covid-19, according to an exclusive report by the Guardian’s Lisa O’Carroll.

The drugs range from Heparin, which is used for blood thinning, to therapies still in clinical trial for conditions such as muscular, lung and blood disorders, which have evidence of potent anti-viral or anti-inflammatory properties.

The studies are part of the Accord (accelerating Covid-19 research and development) programme involving doctors and scientists, industry, the NHS the National Institute for Health Research (NIHR) and UK Research and Innovation.

“We are looking for a signal of both safety and efficacy, something that could reduce the severity of the disease, shorten its duration and prevent patients going into the intensive care environment,” said Tom Wilkinson, a respiratory medicine professor and consultant, who is the Accord academic lead, from the NIHR Southampton Biomedical Research Centre.

Just a handful of patients have enrolled for the trial so far and with coronavirus patient numbers falling, researchers are keen to quickly enlist as many as possible, said Wilkinson.

Morning and welcome to the UK liveblog on the coronavirus.

Children in England in reception, year 1 and year 6 can start returning to the classroom today, but half of pupils are expected stay home as many parents, councils and teachers remain sceptical of the government’s assurances over their safety.

Boris Johnson’s government has invested considerable political capital in opening classrooms to primary school pupils in three year groups – reception, year 1 and year 6 – leading to warnings by independent scientists that it is too soon to reopen while transmission and infection rates remain so high.

While most of England’s 18,000 primary schools will open to more pupils from Monday, a large majority of headteachers say they are not able to accommodate all three year groups, in some cases for the remainder of the school year.

According to a survey conducted by the National Foundation for Educational Research, primary school leaders expect that 47% of families will keep their children home, with the proportion rising to 50% among pupils eligible for free school meals.

The gradual reopening of schools is part of a raft of measures to ease the lockdown in England on Monday, which includes allowing groups of up to six people to meet outdoors and in private gardens. Outdoor markets and car showrooms can now resume trading from today, provided they socially distance.

Senior public health officials made an extraordinary last-minute plea for ministers to scrap Monday’s easing of the coronavirus lockdown in England, warning the country is unprepared to deal with any surge in infection and that public resolve to take steps to limit transmission has been eroded.

The Association of Directors of Public Health (ADPH) said new rules were “not supported by the science” and that pictures of crowded beaches and beauty spots over the weekend showed “the public is not keeping to social distancing as it was”.

It follows comments by a second senior government medical adviser, Jenny Harries, a deputy chief medical officer for England, who effectively criticised Dominic Cummings for breaching lockdown regulations by saying it is “a matter of personal and professional integrity” to abide by the rules.

I’ll be helming the liveblog this morning. If you need to get in touch you can email me (aamna.mohdin@theguardian.com) or reach me on Twitter.