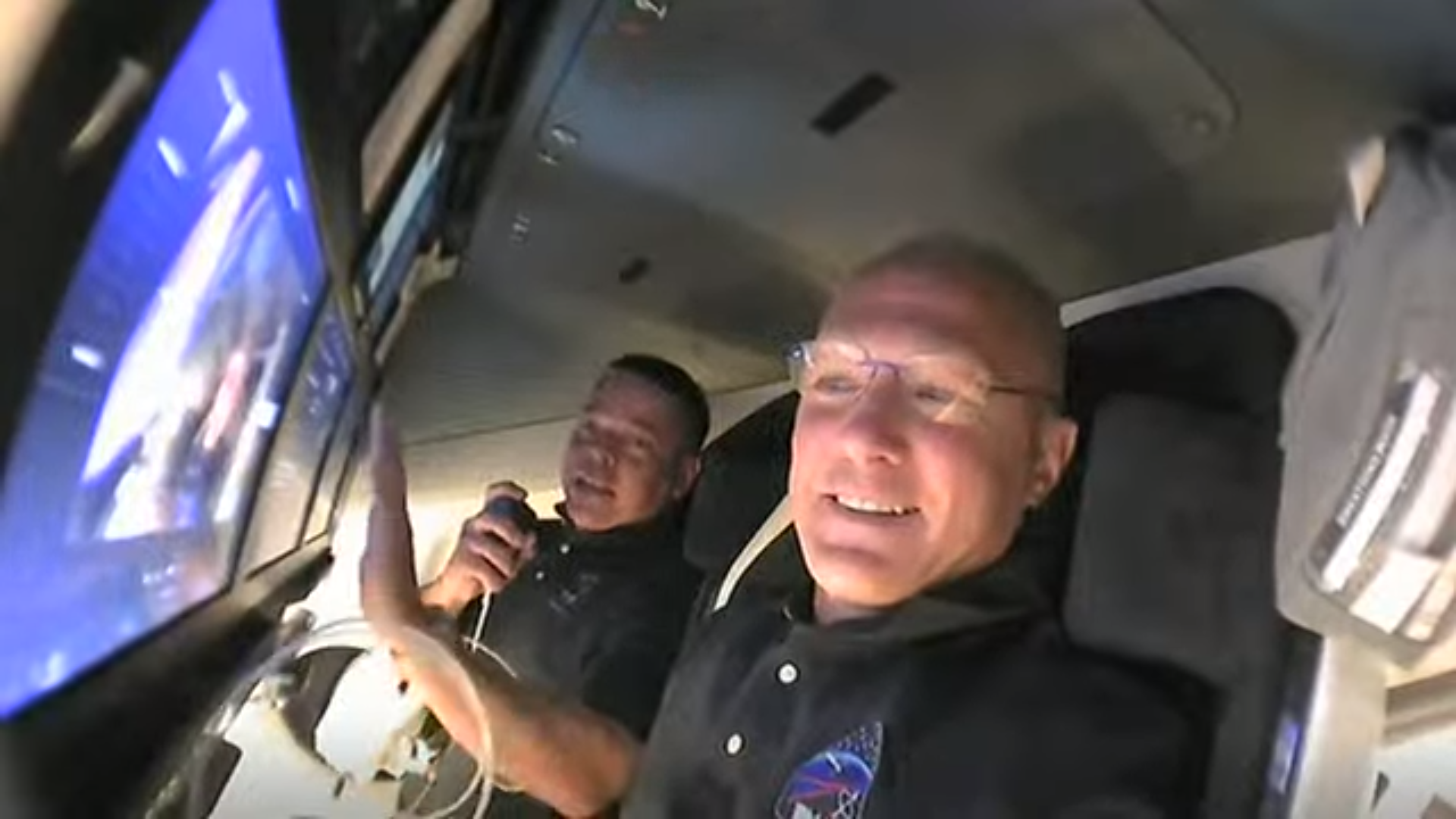 The NASA astronauts who launched on a SpaceX rocket Saturday (May 30) invited the world into their spacecraft with a unique, live tour around their Crew Dragon capsule.

This afternoon at 3:22 p.m. EDT (1922 GMT), veteran NASA astronauts Bob Behnken and Doug Hurley lifted off aboard a SpaceX Crew Dragon capsule, headed for the International Space Station as part of the Demo-2 test flight. Following a successful launch, the astronauts changed out of their spacesuits and bucked in for the 19-hour trip aboard the capsule, which the astronauts revealed is named Endeavor, to the space station.

The pair of astronauts were so welcoming to all who were watching SpaceX’s live launch stream that they decided to give everyone a little tour around.

You can watch the Demo-2 mission live here and on Space.com’s homepage, courtesy of NASA TV, through docking tomorrow (May 31).

“Welcome aboard Endeavor, the SpaceX vehicle headed to the International Space Station,” Behnken said, addressing the camera recording the live events in the capsule.

Behnken started the mini-tour, a sort of cosmic vlog (if you will), with the touchscreens glowing brightly in front of the astronauts’ seats. “You can see the forward view that we had during the maneuvers that we most recently did, you can look out the window,” Behnken said. “Now we’re kind of pointed into space so that the windows can see the Earth below us. But we’ve got the capability to interface with the vehicle and it’s kind of interesting.”

He pointed out a few buttons that can, for instance, deploy parachutes upon re-entry, “but,” he added, “the primary interfaces [are] these displays. So, nice new modern cockpit that we’ve got,” Behnken said.

Behnken moved away from his and Hurley’s seats to show what the astronauts can see from their seats. “Doug from his seat is going to try to follow me so you can tell what can be seen from the seat that he sits in,” Behnken said. “From his seat, when he is inside the vehicle strapped in, this is what his view actually looks like,” he added, panning the camera to show a window looking out into space.

“You can see a window off to the one side, we each have a window that we can view out and see what’s going on outside,” Behnken said, adding that peering out the window “was exciting on ascent, for us to be able to see the the arm rotate away from the pad. And that’s when we both, I think, knew that we were going to launch today. So that was that was super cool. I’ve got one on my side as well.” Behnken also showed off the hatch on the Dragon’s side.

The veteran astronaut also briefly illustrated what it was actually like being on board, to show “what it’s like to actually float in zero gravity,” he said. “It is a little bit of tight quarters, but I’m going to try to demonstrate some of the capabilities that we have,” Behnken said while adding that someone requested that he do a backflip in the zero gravity aboard the capsule. “I’m going to kind of do a side spin,” he said, “which is a little bit of a permutation on that request.”

Behnken and Hurley added a sweet note to the tour by showing off a stuffed, sequinned stowaway: a small dinosaur (an apatosaurus named Tremor, Behnken clarified.) Both astronauts have young sons who, Behnken explained, are very into dinosaurs.

So when it came time to choose a zero-g indicator, they gathered up all the toy dinosaurs between the two households and had their sons decide which would be going to space. “I’m sure they would rather be here, given the opportunity but hopefully they’re proud of this as well,” Behnken said.

Before signing off, Behnken panned the camera to one of the windows, trying to give those watching a view from the capsule, from which they could see the coast of Newfoundland and the Atlantic ocean. Unfortunately, it was a little dark and hard to see, but the view from Endeavor is surely gorgeous.

“Anyway,” Behnken added, “hopefully you enjoy that view as we pass over the Atlantic. And I think with that we will work ourselves back into the seats and wrap things up for this evening.” He pointed to Hurley, saying “make it a nice big smile for the camera,” and signed off with a few, last reflective thoughts on the historic day.

“And just want to thank everybody who gave us this opportunity and work so hard to make this happen today. So with that, I think it’ll be good night from capsule Endeavor. Good night to everyone at NASA at SpaceX and the United States and congratulations to the teams that got us into orbit. We’re looking forward to seeing Chris Cassidy and his Russian colleagues on board the International Space Station tomorrow morning,” Behnken concluded.