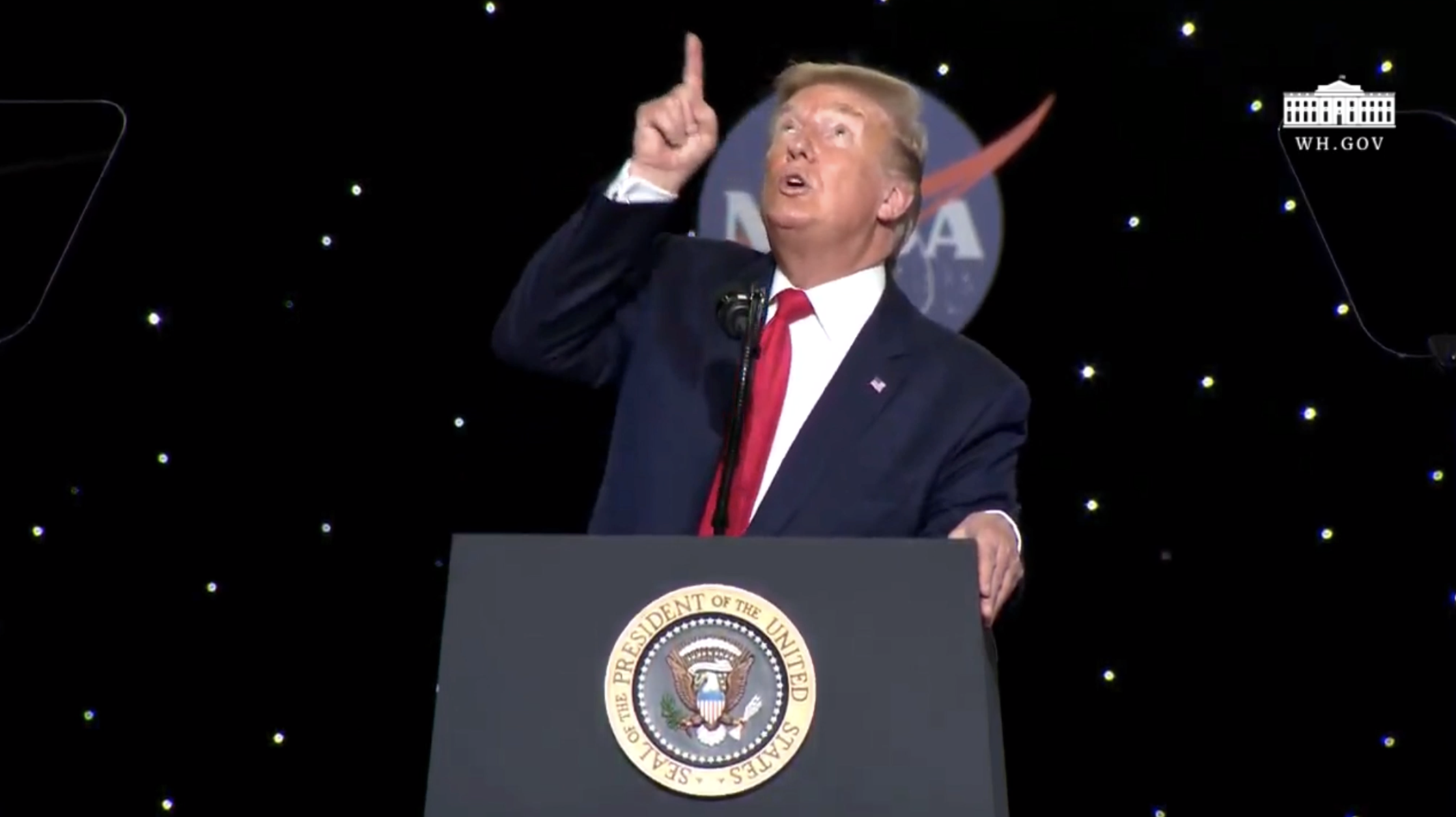 President Donald Trump hailed SpaceX’s epic first crew launch today (May 30) as the dawn of a new era in spaceflight.

SpaceX’s Demo-2 test mission, which is carrying NASA astronauts Bob Behnken and Doug Hurley to the International Space Station (ISS) aboard a Crew Dragon capsule, lifted off atop a Falcon 9 rocket at 3:22 p.m. EDT (1922 GMT) from Kennedy Space Center (KSC) in Florida.

“What Col. Douglas Hurley and Col. Robert Behnken did this afternoon was pure American genius and courage,” the president said during a post-launch speech at KSC today. “They joined the ranks of just seven prior American astronauts who have made the perilous maiden voyage to test a new class of spacecraft.”

Behnken and Hurley are scheduled to arrive at the orbiting lab tomorrow morning (May 31) and stay at the ISS for one to four months. (The duration of Demo-2 has yet to be determined.) If all goes well with their mission, Crew Dragon and the Falcon 9 will be fully validated to fly operational crewed missions for NASA.

SpaceX holds a $2.6 billion deal with the space agency to conduct six such flights, the first of which is tentatively scheduled for late August. So, today marked a big step toward an exciting future, Trump said.

“Today, the groundbreaking partnership between NASA and SpaceX has given our nation the gift of an unmatched power — a state-of-the-art spaceship to put our astronauts into orbit at a fraction of the cost of the space shuttle. And it’s much better,” Trump said.

“From now on, the United States will leverage the fast-growing capabilities of our commercial sector and the finest pieces of real estate on Earth, which you need very badly, to send U.S. astronauts into space,” he added. “Today’s launch makes clear that the commercial space industry is the future.”

Boeing is a part of that future, too. The aerospace giant signed its own contract with NASA’s Commercial Crew Program, worth $4.2 billion, which it will fulfill with a capsule called CST-100 Starliner. Starliner isn’t quite ready to fly people, though; the capsule still must ace an uncrewed flight to the ISS, and the launch date of that mission is unclear at the moment. (Boeing took a crack at that uncrewed mission in December 2019, but Starliner suffered a glitch and didn’t manage to meet up with the ISS as planned.)

Trump thanked “the incredible men and women of NASA” and SpaceX’s 8,000 employees for their hard work to make today’s success possible. And he singled out SpaceX founder and CEO Elon Musk for particular praise.

NASA Administrator Jim Bridenstine kicked off the postlaunch event at KSC, then handed the microphone to U.S. Vice President Mike Pence, who chairs the U.S. National Space Council. Pence spoke for about 10 minutes, then ceded the stage to the president, who spoke for about half an hour.

Trump began by discussing George Floyd, who died while detained by police on the streets of Minneapolis on Monday (May 25), and the social unrest that has followed in the tragedy’s wake. Both he and Pence, in appealing for peace and order, invoked NASA’s Apollo program, which landed astronauts on the moon in a time of great tumult and division.

“The same spirit which powered our astronauts to the moon has also helped lift our country to ever-greater heights of justice and opportunity throughout our history,” Trump said. “So, today as we mark a renewed commitment to America’s future in space — a tremendous commitment it is — let us also commit to a brighter future for all of our citizens right here on Earth.”

During his address, which at times sounded like a campaign speech, the president also stressed that the United States would remain the world’s dominant spacefaring nation, and that its influence in the final frontier would only grow. He cited NASA’s Artemis program, which is working to land two astronauts near the moon’s south pole in 2024, and the agency’s plans to put boots on Mars in the 2030s.