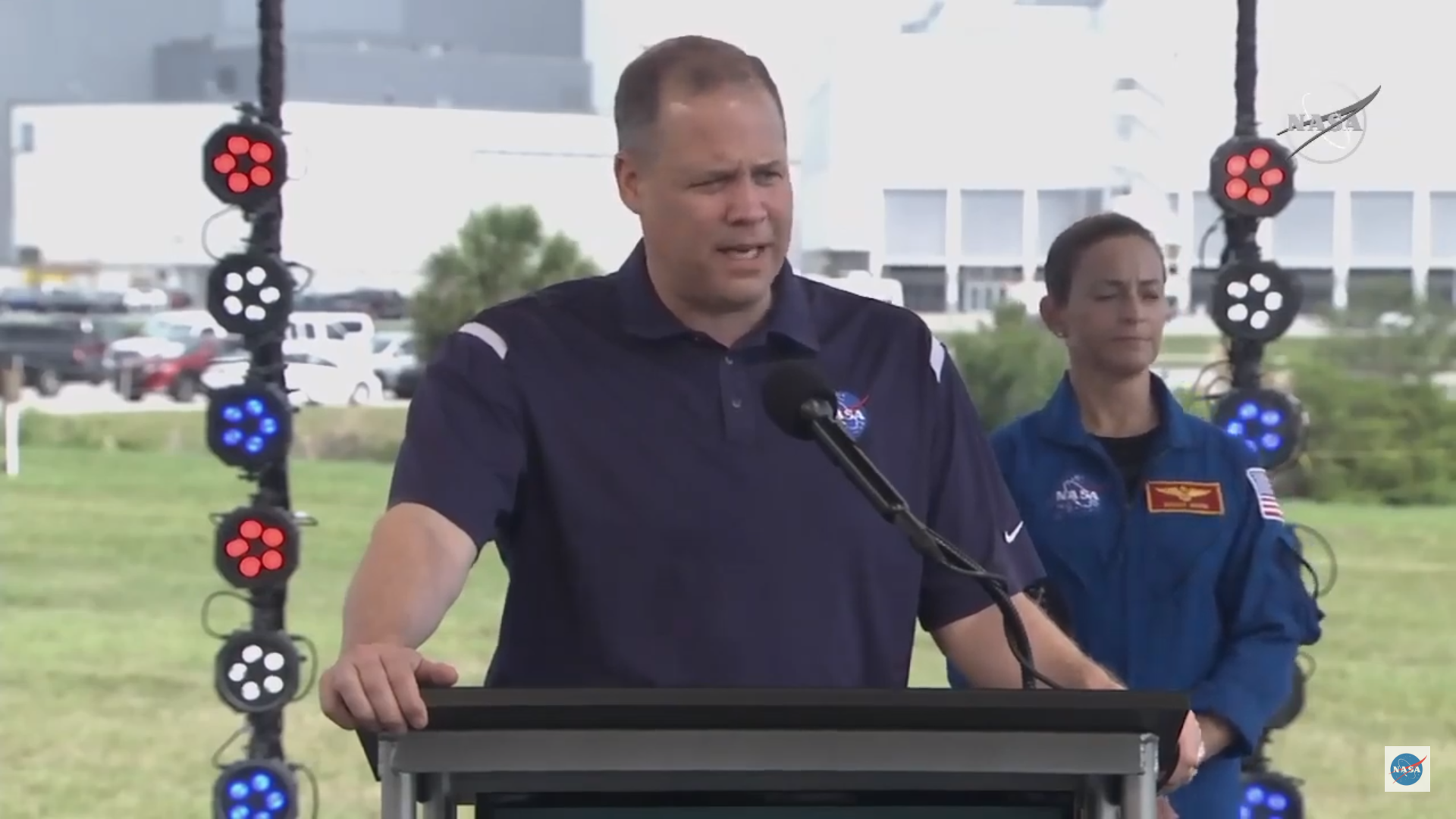 Weather is at top of mind for NASA’s first crewed launch on a SpaceX capsule, dubbed Demo-2 and currently scheduled for Saturday (May 30).

The sun was shining over Kennedy Space Center (KSC) in Florida in a news conference on the mission this morning (May 29). But grey skies and electricity in the atmosphere scrubbed the first launch attempt for the mission on Wednesday (May 27). “Hey, where was this weather Wednesday afternoon?” Bob Cabana, KSC director and retired NASA astronaut, joked to open the news conference.

For SpaceX’s next two launch windows, on the afternoons of May 30 and May 31, weather forecasts aren’t looking so promising. A forecast issued this morning by the 45th Weather Squadron, which partners on KSC launches, shows a 50% chance that weather will interfere with the launch attempt tomorrow and a 40% chance of the same for Sunday’s launch attempt. On both days, the primary risks in play are rain and clouds.

And the weather must be good at exactly the right time for Demo-2 to launch. The mission has an instantaneous launch opportunity, not a three- or four-hour window as is common for many satellite missions.

Although NASA is currently targeting a Saturday launch, a weather briefing later today may result in delaying the next attempt until Sunday in hopes of clearer skies, NASA Administrator Jim Bridenstine said. Or, the team could choose to attempt the launch and scrub late in the countdown again if conditions look threatening.

That’s the way spaceflight works, Bridenstine emphasized during his remarks. “You have to have all of these things met ahead of time, and then you select the window, and if the weather is good, you go. If the weather is not good, you don’t go,” he said, adding that there were additional launch opportunities next week and beyond.

SpaceX and NASA scrubbed Wednesday’s launch attempt about 20 minutes before the instantaneous launch window due to three different weather issues that posed safety concerns for the launch.

“We had too much electricity in the atmosphere,” Bridenstine said. “The challenge there is not that we were in a lightning storm or anything like that; the challenge is that a launch could in fact trigger lightning. In fact, the rocket itself could become a lightning bolt.”

Wednesday’s procedures were still valuable, he emphasized. “We have done a dry dress rehearsal. We had never done a wet dress rehearsal,” Bridenstine said. “So yes, there were learning opportunities there.We’re always gathering data.”

Bridenstine also reiterated that the safety of the two astronauts onboard, Bob Behnken and Doug Hurley, was the team’s highest priority in making decisions like whether to risk weather interference.

The mission will represent the first launch of astronauts from the U.S. since 2011, so some have speculated that eagerness to achieve the milestone may lead to increased risk-taking. Bridenstine was adamant that won’t be the case, and that SpaceX and NASA will remain flexible in determining when to launch or delay.

“We’re balancing so many different things right now,” Bridenstine said, pointing to astronaut sleep schedules, the space station’s orbit and other factors. “I just want people to know that when we balance all of these things, there is always, always, always going to be uncertainty.”