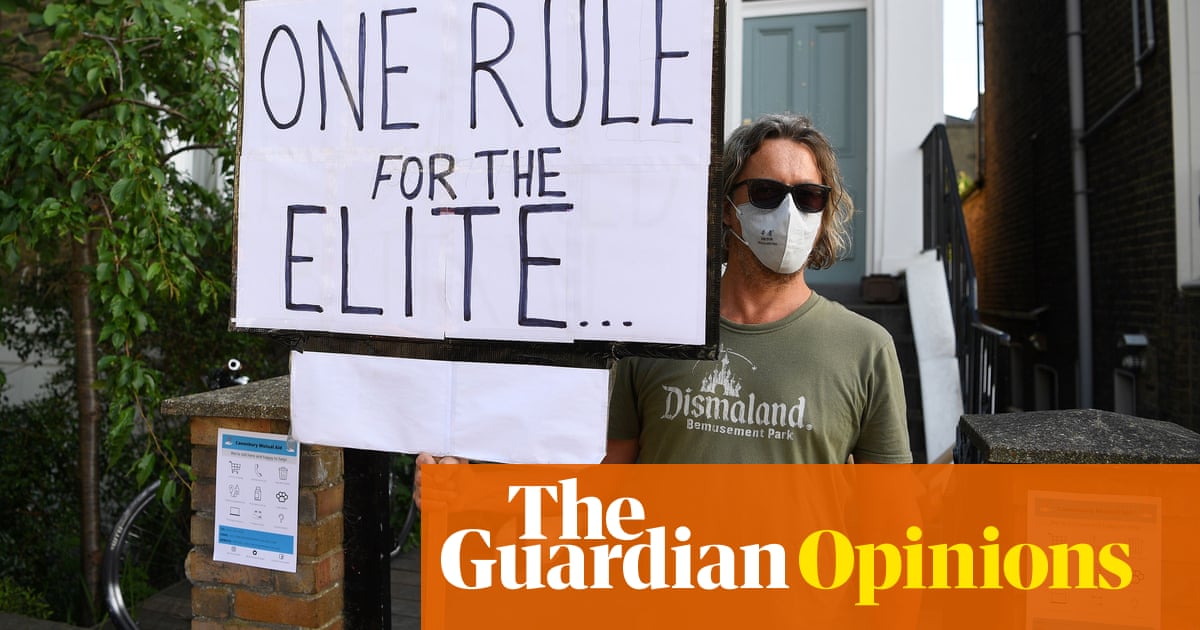 Out of the dark side emerged the power behind the throne. Can the supreme disrupter do humility? Can he grovel an apology in front of those he most despises?

No regrets, not sorry, but he tried a kind of plea for pity. The Cummings family plainly had a bad time, but his words may fall on stony hearts among other families who had also the virus, but obeyed the stay-at-home order without travelling 260 miles. The vast majority didn’t seek out loopholes, but kept the “stay at home” rule in word and spirit. Did the Cummings have no friend in London? Who would take a 30-mile drive to a beauty spot, risking wife and child, as an eye test?

Everyone wants to interpret the orders their own way but, as someone who sits on the science advisory group (Sage) and as No 10 director of strategy, he makes the rules. Never were these so crystal clear as when lockdown slammed the shutters.

Behind front doors people suffered in solitary confinement. The single mother with the disabled child, the cancer patient barred from their children, aged grandparents in care homes who never saw families again. Most heartrending was the 13-year-old boy dying all alone because his parents obeyed the rules to stay away.

Everywhere lonely deaths and lonely funerals are seared deep in everyone’s thoughts, alongside tales of heroic health and care staff sacrificing their lives, and local groups helping others. Everyone is touched by this national calamity, which will yet leave more pain in its economic wake with so many jobless, with careers blighted, hopes dashed.

Just as well this Thursday will be last the clap-for-carers as the public mood risks turning angry: clap the heroes but beat your saucepans at scoundrels who tell us to do what they say, not what they do. The prime minister’s defence of Dominic Cummings’ rule-flouting is no Westminster bubble brouhaha, but it drives right to the heart of voters’ lived experience. Typhoid Dom and Mary escaped London at peak infection, within talking distance of parents while others pined for family.

By clinging on, both Cummings and his leader expose an alienation from public sentiment, after nine weary weeks of isolation with so much grief and ruin. But they have opted to take on a flock of bishops, police, medics, scientists and a flotilla of Tory MPs whose inboxes overflow with public indignation. Any minister would have been rapidly expelled. This is no mere storm in a Westminster bubble: illegally shutting down parliament and lying to the Queen did Boris Johnson no harm in the election because few voters felt personally prorogued. But this is personal.

For as long as Cummings stays, Johnson is damaged, burning through political credit when he has very little to spare, sliding in polls that show 52% of voters calling for Cummings to go, only 28% to stay. We know Johnson to be a man without loyalty – not to friend, lover or family, faithful only to himself. So why is Cummings indispensable?

This exposes the weakness and dependency of a prime minister who is only an empty frontman, entirely unfit and unwilling to shoulder the job’s heavy lifting, relying dangerously on a svengali who has persuaded him of his genius. But as long as Johnson cleaves to him, he looks the servant not the master.

Look what else looms as a flurry of devastating analyses of Johnson’s mishandling of the epidemic emerges, even from his Tory press. As infections doubled every three days there were “38 days when Britain sleepwalked into disaster”, the Sunday Times found, excoriating a lockdown delay that “cost thousands of lives”. Blithely Johnson ordered “business a usual”, boasting in true Trumpian style on 2 March that Britain was “very, very well prepared”, with “fantastic testing systems” and “amazing surveillance of the spread of the disease”. Radio 4’s More or Less has just demolished the daily lies on testing. It has never been anywhere near 100,000 people a day – in fact, barely half that, once duplicate tests and non-tests are deducted.

Cummings doesn’t matter. What really matters is the damage done to trust in future official coronavirus messages. This week Johnson will relax the rules further, partly bowing to pressure from the impatient right wing of his party. Persuading people to stick to more complicated rules will be hard while gradually easing out of lockdown.

I talked to an experienced contact tracer, now working on the Covid-19 track-and-trace scheme: she describes the chaos of its overcentralised non-functioning computerised system which will certainly not be up and running by next Monday, let alone fulfil Johnson’s fatuous promise of a “world-beating” system.

But here’s what worries her most. She will be cold-calling people with no symptoms to order them to strictly home-isolate for 14 days, just as everyone else is easing up. If Cummings couldn’t obey this, even with florid infection in his family, how much harder will it be to convince others not infected?

Explain, apologise, move on: what Johnson should have said about Dominic Cummings | Simon Jenkins

“We know there are mountain ranges of surges ahead of us each time there’s an easing of rules. We expect rises at the end of June, and the end of July, and just hope there’s no second wave in the autumn or winter,” she says. Freedom from lockdown means chasing down every new Covid-19 case, commanding rigid obedience from all they’ve contacted, even those who can barely remember meeting the infected person. By defending Cummings, Johnson has demolished a sense of moral obligation, undermining the public spirit that says “I will if you will”. He has allowed us all to follow our “instinct”, not the contact tracers’ instructions.

In a cry of despair, Prof Stephen Reicher, of the Sage behavioural insights subcommittee, says: “Boris Johnson has trashed all the advice we have given on how to build trust and secure adherence to the measures necessary to control Covid-19.”

A government with a majority of 80 is rock solid. But a Tory prime minister is never safe. Leaders in this ruthless party last only so long as they remain winners. After the outrage over her poll tax, even Margaret Thatcher fell under their undying lust for power. It’s an impulse that keeps Conservatives in office most of the time – and one which Labour often lacks.

The tens of thousands of lives needlessly lost during Johnson’s cavalier handling of the epidemic will weigh heavily on his premiership from now on. Indulging one of his own to disobey rules that everyone else followed may linger long in public memories too. They will hope this blows away, but I suspect it will leave behind political scars – yet another signal that we are never “all in this together”.

• Polly Toynbee is a Guardian columnist