onald Trump’s disdain for the people, country and values his office is supposed to represent is unmatched in recent memory. And he has found in the secretary of state, Mike Pompeo, a kindred spirit who has embraced his role as Trumpism’s number one proselytizer to the world.

Pompeo doesn’t wield nearly as much power or have the jurisdiction to inflict damage on as wide a range of issues as the president. He’s not as crass or erratic as Trump, and his Twitter feed seems dedicated more to childish mockery than outright attacks. But when it comes to foreign policy, Pompeo’s penchant for undermining America’s credibility is top-notch.

At Pompeo’s recommendation, Trump fired the state department’s inspector general, who is supposed to be an independent investigator charged with looking into potential wrongdoing inside the department. Steve Linick was just the latest in a series of inspectors general across the government that Trump had fired in an attempt to hide the misconduct of his administration – but it also shone a spotlight on how Pompeo has undermined his agency.

According to news reports, Pompeo was being investigated by the inspector general for bypassing Congress and possibly breaking the law in sending weapons to Saudi Arabia, even though his own department and the rest of the US government advised against the decision. He was also supposedly organizing fancy dinners – paid for by taxpayers – with influential businesspeople and TV personalities that seemed geared more towards supporting Pompeo’s political career than advancing US foreign policy goals. And he was reportedly being scrutinized for using department personnel to conduct personal business, such as getting dry cleaning and walking his dog.

But these revelations merely reaffirm a pattern of activities by Pompeo unbecoming of the nation’s top diplomat. When the House of Representatives was in the process of impeaching Trump over his attempt to extort Ukraine for personal political purposes – an act that Pompeo was aware of – Pompeo defended Trump while throwing under the bus career state department officials, like the ousted US ambassador to Ukraine Marie Yovanovitch, who spoke out. Pompeo has regularly ignored Congress, withholding documents from lawmakers – including during the Ukraine impeachment investigation – and refusing to appear for testimony. In 2019, the IG released a report detailing political retaliation against career state department officials being perpetrated by Trump officials. And Pompeo has spent considerable time traveling to Kansas and conducting media interviews there, fueling speculation that he has been using his position to tee up a run for the Senate, a violation of the Hatch Act.

Pompeo is a natural Trumpist. In her fantastic profile of the secretary of state, Susan Glasser notes of his first congressional race: “Pompeo ran a nasty race against the Democrat, an Indian-American state legislator named Raj Goyle, who, unlike Pompeo, had grown up in Wichita. Pompeo’s campaign tweeted praise for an article calling Goyle a ‘turban topper’, and a supporter bought billboards urging residents to ‘Vote American – Vote Pompeo’.” Later, as a member of Congress, Pompeo made a name for himself by helping to fabricate the Benghazi conspiracy theories that shamelessly used the memory of a deceased foreign service officer to undermine the state department. 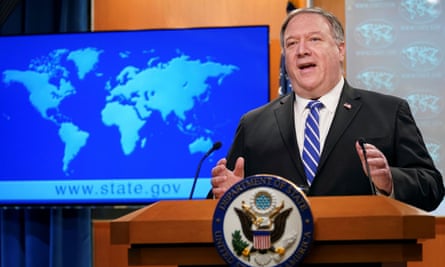 ‘Trump is undermining American leadership in incalculable ways, and Pompeo has weaponized the state department on the president’s behalf.’ Photograph: Kevin Lamarque/Reuters

Next to Trump’s assault on US values, Pompeo’s role as top Trump lackey may seem insignificant. But the secretary of state is often the most senior US official that other countries and publics hear from on any number of issues. Even with Trump in the Oval Office, a secretary of state that was committed to the constitution – not Trump – would at least be able to fight for the values that US foreign policy should embody, and shield the department’s day-to-day business from Trump’s outbursts. The work that department professionals conduct around the world – helping American citizens abroad get home in the early days of the pandemic or coordinating assistance to other countries to cope with the coronavirus – is vital to American national security, and at the core of the image that America projects abroad.

Trump is undermining American leadership in incalculable ways, and Pompeo has weaponized the state department on his behalf

The world today needs principled and active US leadership as much as ever. In a normal world, the US secretary of state would be working through international organizations like the WHO to lead the response to the coronavirus, not threatening to withdraw from the global body. The secretary would be pushing for robust foreign assistance to help other countries fight the pandemic, not cutting funding. They would be trying to find a path that balances working with China on responding to the pandemic with pushing back on the Chinese Communist party’s disturbing behavior – like signaling it may end Hong Kong’s autonomy – instead of scapegoating China.

But Trump is undermining American leadership in incalculable ways, and Pompeo has weaponized the state department on the president’s behalf. Like Trump, Pompeo’s behavior is sending signals to other countries that the US government is acting more like the autocratic and corrupt regimes that Pompeo so regularly calls out. As Trump hurls daily attacks on the media, Pompeo has taken to berating journalists. These assaults by America’s leaders on the free press are giving cover to dictators around the world to criticize their countries’ media. Firing government watchdogs who are investigating top officials is exactly the kind of behavior that the United States would normally criticize in its annual human rights reports.

The fish, they say, rots from the head. And Pompeo, like his boss, is actively undermining the values embodied by the state department, its professionals and the Americans they represent.