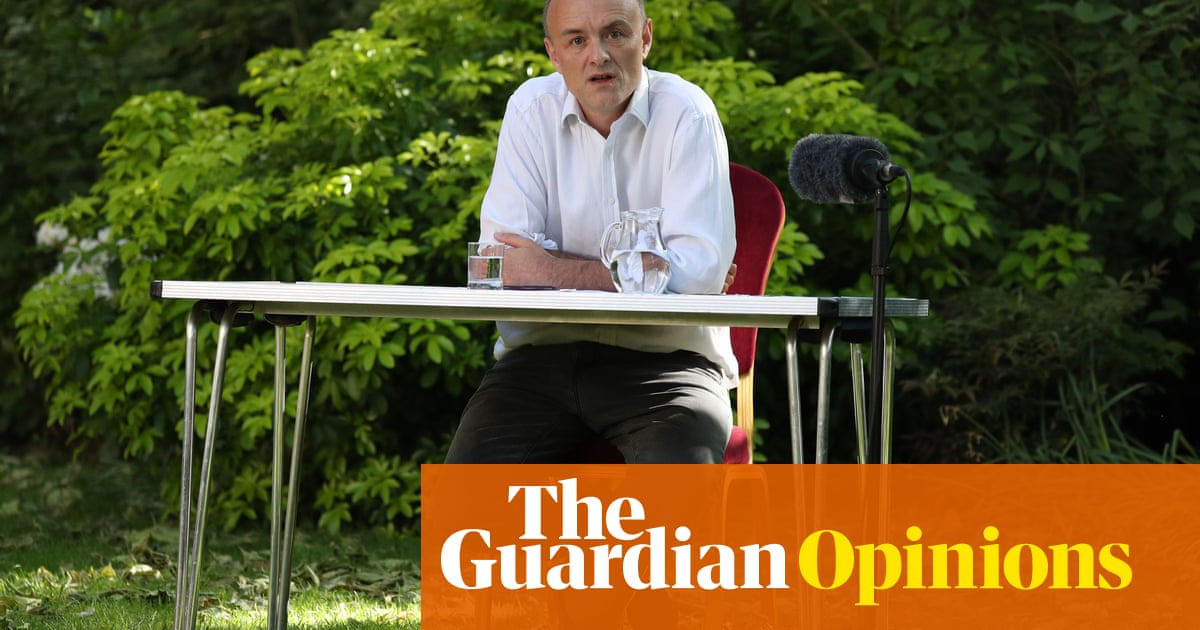 f the British establishment has one signature ethos it is: “One rule for us and another for everybody else.” It is this that caused national rage during the politicians’ expenses scandal, when millions saw MPs making absurd and frivolous claims – for duck islands, second homes, swimming pool boilers – at the taxpayers’ expense, knowing that they, on far smaller salaries, would be sacked for gross misconduct for far less opulent claims at work. It is this, too, which fuels anger over tax avoidance, when the well-to-do defy the spirit rather than the letter of the law in ways that are impermissible except for the gilded few.

Dominic Cummings has applied this same establishment mantra, but in the midst of a national emergency, which has killed tens of thousands and restricted the movements of millions more. Many have had to endure sacrifices greater than they have ever faced.

He needed to drive 30 minutes to a beauty spot to test his eyesight, which he coincidentally did on his wife’s birthday

Here is just one sacrifice. A woman from the north-east of England tells me of how she decided to stay locked down in London, missing the last two weeks of her father’s life. When she attended her beloved dad’s funeral just miles from where Cummings was staying – limited numbers, two metres’ social distancing, no physical comforting – the family were told that police would be on standby at the crematorium “and would act if we breached the guidelines”. As she puts it: “Let’s not forget, most ‘normal’ people do not get a press conference. They get a fine.”

Cummings made his mark as the man who invented the now infamous “Get Brexit done”, and reportedly applied this same comms ingenuity to the government’s initial clear and striking instruction: “Stay home”. Tonight, his media strategy struck a different path. First, blame the media for misleading the public. He repeatedly claimed that it was understandable for the public to be angry if they had relied on media reports: but these were outright wrong. Here was brazen crybullying from a man whose chief political enterprises – Vote Leave and the Conservative election campaign – relied on the zealous support of the rightwing press, which had no qualms in monstering his opponents. Second, bog down his critics in convoluted details to muddy the water and hope boredom sets in as each claim is dissected and contested.

The claims themselves are indeed contradictory and full of bizarre logical leaps. Cummings said his wife was ill and showing signs of Covid-19 and his decision to seek childcare was motivated by the fact he might catch it, so it’s not clear how driving across the country with a potentially infectious person fits with the rules.

The fact his child was hospitalised in Durham during their stay underlines why the rules are there in the first place. Their son tested negative, but they did not know this when he was admitted. At the time, infections were much lower there than in London. If potentially infected people from the hotspot of the pandemic travel across the country, they risk seeding the virus in hospitals and allowing a deadly illness to spread to vulnerable patients.

The rest of Cummings’ contortions were a straightforward insult to sense, reason and public intelligence. He needed to drive about 30 minutes to a beauty spot to test his eyesight to make it was safe to drive back to London – which he coincidentally did on his wife’s birthday, with both her and their little child in the car.

The explanation why his wife wrote an article for the Spectator detailing their life in lockdown (to which he said he contributed “just a few lines”), while failing to mention details of their sojourn makes little sense. He claimed that revealing his whereabouts would risk his parents’ safety as his Islington home in London was already being targeted due to media misinformation about his role in implementing lockdown. If he believed he had been placed at risk because of his public profile and because personal details are in the public domain, then why write such an article at all? And why, if all of this was above board, the refusal to answer questions posed by journalists about his whereabouts for weeks?

This isn’t about breaking the law and – except in some strikingly egregious examples – neither was the expenses scandal. It is that when millions of people are making unprecedented sacrifices, when many of their lives are already stressful and difficult as it is, they expect those rules to be followed by everybody. After all, they are enduring this pain for the common good.

And above all else, they expect those in power, who are responsible for implementing and enforcing the necessarily punitive rules, to abide by them too. A parent being stricken with coronavirus with a child to care for is not exceptional in a pandemic – indeed, there are lone carers in that situation who have it far tougher. Many of those have stuck by the rules and undoubtedly struggled to care for their family as they did so. But they did it. All we have learned from Cummings’ performance is he broke the rules and believes that his exceptional circumstances – particularly his important role in government – excuse this. One rule for him, one rule for everyone else.

Cummings’ defenders make ludicrous and self-discrediting claims that this is akin to a witch-hunt. Any attempt to preserve one of the most influential figures in the country from scrutiny by bestowing victimhood on him must be resisted. Cummings broke his own rules; everything else is noise, and a public health strategy that exists to preserve human life has been undermined.

The reasons for the government’s current panic are obvious. Boris Johnson does not believe he can survive without Cummings, not least as the collective sense of loyalty in a crisis wears off, and scrutiny intensifies over how a delayed lockdown and a failure of testing and lack of personal protective equipment led to Europe’s worst death toll. But a government that stirred the pot of a populist culture war, claiming to be on the side of the little guy against an out-of-touch, contemptuous Islington elite now has to face facts: this elite now has a face, and it is that of Dominic Cummings.

• Owen Jones is a Guardian columnist