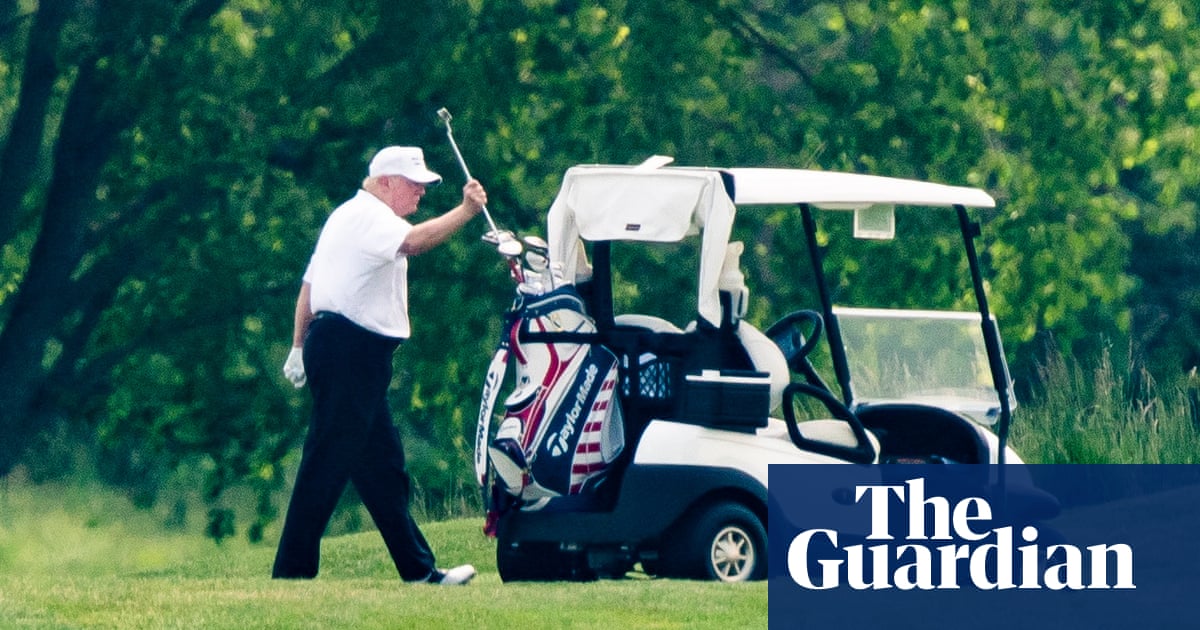 Donald Trump teed up fresh controversy on Saturday, by leaving the White House for his golf course in Virginia.

Early on a fine morning in Washington DC, the president was seen by reporters “in his typical golf wear of white polo shirt and white baseball cap … before he departed the White House” for an undisclosed location. Secret Service agents accompanying the president were photographed wearing masks. Trump was not seen to cover his face.

America begins to unlock for summer – but is it inviting a disastrous second wave?

He later arrived at his golf club in Sterling, Virginia, where he was pictured playing a round.

As of Saturday morning, more than 1.6m cases of Covid-19 had been confirmed in the US, with the death toll approaching 100,000.

As public health experts warn about the potential cost of reopening too soon, the Trump administration is encouraging states to kick start their economies and people to enjoy the Memorial Day weekend, traditionally the start of the American summer.

At the White House on Friday, coronavirus taskforce member Dr Deborah Birx said that though there was still “significant virus circulating” in Washington DC, Maryland and Virginia, activities such as golf are encouraged.

“We’re asking continuously for you all to be outside,” she said, “to enjoy your Memorial Day weekend, to play golf, to hike, as Dr [Anthony] Fauci said, to play tennis with marked balls and to be out with your families that you have been in the household with and to even consider sharing social distance space.”

Birx also said golfers should not touch flags on greens, and said picnicking would be OK “as long as you have utensils that belong to individuals and that maybe can be thrown out immediately”.

“There’s a lot of things to think through,” she said. “I know you can do this. I know the American people can do it. Please, as you go out this weekend, understand you can go out.

“You can be outside, you can play golf, you can play tennis with marked balls, you can go to the beaches if you stay 6ft apart. But remember that that is your space, and that’s a space that you need to protect and ensure that you social distance for others.”

In the Washington DC area, the weather encouraged outdoor pursuits. Other regions were not so lucky. New York’s governor, Andrew Cuomo, signed an executive order to allow outdoor gatherings of restricted size over the Memorial Day weekend, but on Saturday morning New York City, at least, was soaked by pouring rain.

Trump’s fondness for golf has been a constant source of controversy, not least for its cost to the taxpayer and its benefit to his family business.

Famously, on the campaign trail in 2016 he told supporters: “I’m going to be working for you. I’m not going to have time to go play golf.”

Since taking office, though, Trump has played more than 200 times. He last teed off in Florida on 8 March, when the coronavirus outbreak was gathering pace.

When Barack Obama was president, Trump often criticised him for the amount of time he spent on the fairways. On Saturday, even as Trump travelled to his course in Virginia, a tweet from October 2014 was much remarked upon.

It said: “President Obama has a major meeting on the NYC Ebola outbreak, with people flying in from all over the country, but decided to play golf!”