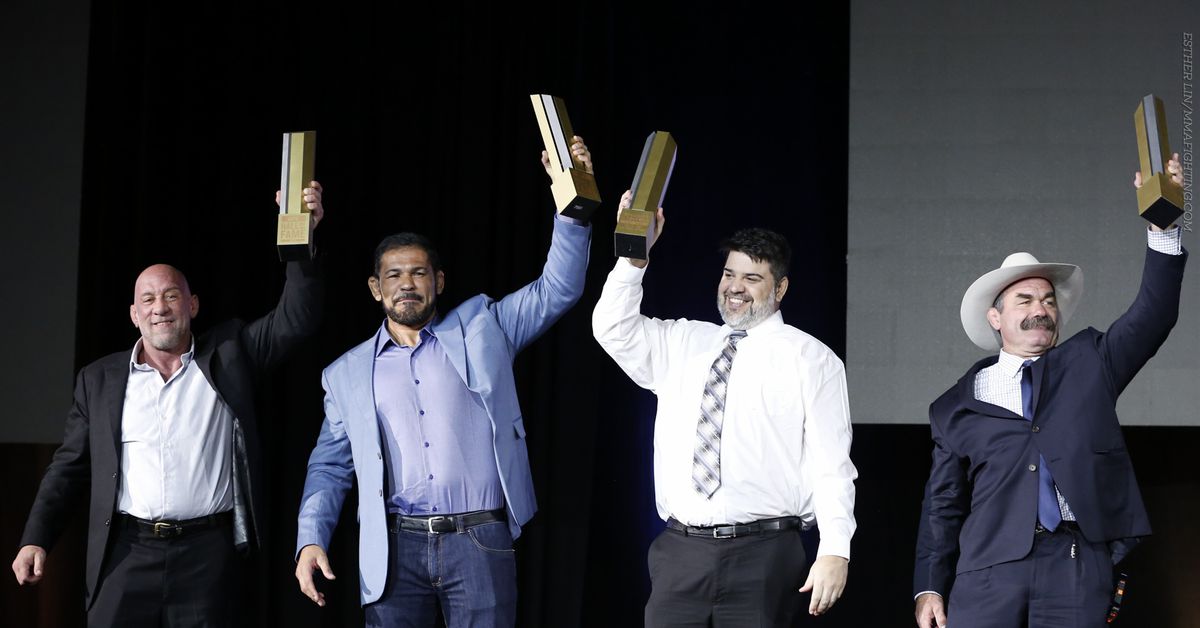 Fights are now back in full swing which is great because, at least for a little bit, it means we can stop talking about the coronavirus. So instead, let’s talk about the UFC Hall of Fame, the heavyweight division, and Tony Ferguson.

First, let’s start here: the UFC’s Hall of Fame is . . . mediocre at best. A quick glance at it will reveal there’s no governing body behind the decisions, it’s just whatever Dana White is feeling at the time (*cough* Hughes-Trigg *cough*). Hence a few obvious snubs and questionable inclusions.

But let’s focus on what’s missing from the Hall. This year, Georges St-Pierre and Kevin Randleman are being inducted, as well as Jon Jones vs. Alexander Gustafsson, Fine additions all and GSP’s induction fills one of the most glaring holes the Hall had in it. So let’s fill the rest of them. Here are the 10 persons most deserving of being inducted next.

For the purposes of this, I won’t be discussing fights as, frankly, the fights section is horrendous. Most of the inductees are good bouts, but aside from Griffin-Bonnar and Coleman-Williams, none of the rest should be in over a myriad of other options. Also, I will not be discussing MMA greats that did not compete in the UFC. Sorry Fedor :’(.

Tank never won much (though he was jobbed by Don Frye in the Ultimate Ultimate) but that didn’t matter much at the time. Abbott introduced the UFC crowds to brawling, outlandish microphone skills, and the power of hand wraps and Kempo gloves. He was one of the first big stars in the UFC, even if he was never a champion.

He fought for a title five times, winning two, and his resume is littered with all-time greats. He’s all over the history and the record books. He should be in the Hall of Fame too.

He was the first UFC “bantamweight” champion (later renamed lightweight) and among the first lower weight stars in MMA history. Then, for an encore, Pulver went to the WEC and helped legitimize the 145 lb. weight class for casual fans the world over.

“The King of the Streets” was the first modern MMA fighter, long before the next modern MMA fighter, Frank Shamrock, came along. He could strike and grapple, and but for shite judging, probably would’ve won two UFC tournaments, instead of just the one. Oh, and he introduced the world of MMA to leg kicks. Ruas is a major omission from the Pioneer wing.

Everyone else who founded the UFC or had a hand in it has gotten their gold jacket. McLaren probably won’t ever get his but it’s hard to argue that a man who was pivotal in getting the ball rolling doesn’t deserve it.

Like the next number on this list, Rogan will be inducted in due time, but by then it will already be past due. While not as important as someone like Jeff Blatnick to the overall growth of the sport, Rogan did something few people could have: he made MMA accessible for a casual audience. Rogan’s infectious enthusiasm for fighting is always present when he’s in the booth and his natural charisma and comedic sensibilities have helped to put generations of casual fans at ease with the sometimes brutal events taking place on their TVs. Joe Rogan has become fabulously wealthy basically by becoming every young man’s Stoned Older Brother, and it turns out, that’s exactly the guy who most UFC fans want to watch fights with.

I imagine they will be inducted soon as well they should be. Dana White (who will be inducted literally the moment he retires) gets much of the praise for the UFC’s rise, but the Fertitta brothers were the men behind the scenes making it all happen.

He’s one of only a handful of people who can be considered the GOAT and he holds scores of MMA records. Now that GSP is in, Anderson’s omission is the most glaringly obvious failure.

Referee since UFC 2. Do I really need to say anything else? Big John was front and center for the entire birth of this sport, and helped usher it along in many ways, including, specifically being a key reason the UFC adopted referee stoppages in the first place. That’s right, in the first two events, stoppages only occurred by submission or corner stoppage (oh what great irony that those basically never happen now). On top of all that, Big John was and is instrumental in the training of future MMA referees and judges. Few men have contributed more to the UFC.

Frank is perhaps not as deserving as some of the others here but he claims top honors because he will never make it in, so long as Dana White is in charge of the UFC. He is the most obviously glaring omission as far as champions go (when you factor in that some are still fighting, etc) but Dana White’s personal grudges know few limits. It’s a minor miracle Tito Ortiz is in the Hall. Don’t expect two.

There are obviously a number of others who merit inclusion but many of them will be added in due time as they finally start to step away from the sport. But I’ll add one honorable mention for good measure: Burt Watson. Universally beloved and with the company for almost 15 years. You can’t argue Watson didn’t contribute to making the UFC what it is today. Had he not left the company so abruptly, he might one day have gotten a jacket.

Is there a good fight for @francis_ngannou right now not named Jon Jones? Anyone else worth him not waiting for a title fight?

Jon Jones is the only fight that makes any sense for Francis Ngannou, other than a title shot. Sadly, it doesn’t seem like that is going to happen anytime soon, which means Ngannou is going to be stuck on the shelf for a long time, while Stipe makes Cormier pay for taking his own time with granting a rematch.

There is a silver lining here though: whenever Ngannou does get to fight for the title, he’s going to win it. That should make things easier to swallow. In the meantime, Francis should take up acting or something.

For as much as Ngannou is in a bad spot right now, that goes double for Curtis Blaydes. Ngannou is at least next in line, even if it will be a bit of a stretch for him to wait. Blaydes is just screwed, having missed his shot twice already, assuming Ngannou does win the title.

Look, there’s a world in which Curtis Blaydes gets a third crack at Francis Ngannou if he just keeps winning. But the VERY definitive nature of the first two encounters means he’s going to have to really rack up a record if Ngannou gets the title. And at heavyweight, that’s hard to do. Any small mistake and you’re done. And even if he does get his shot, then he’s staring down the barrel of a man who has whooped him twice.

Blaydes’ best hope is that Ngannou loses, either to Stipe/DC or to Jon Jones. Then that opens the door for him. If not, he could be stuck on the outside looking in for some time. And that’s a shame because Curtis Blaydes is a great fighter who is a stylistically tough match up for most of the division. I think he’d work Stipe Miocic at this point on wrestling alone. Sadly, we may never find out.

What/who is next for Tony Ferguson? Could you see a move to welterweight?

It’s not as bleak as many would think. Yes, we’ve lost the majesty of the Tony-Khabib fight forever (even if the do battle at some point, it won’t be what it was) but I still think Tony is in a great position. Before him lie two very different, but equally good options.

Option A: Tony just hangs out and waits. Later this year, Khabib Nurmagomedov will fight Justin Gaethje and he’s going to go full Khabib on him. I am the First Apostle of the Church of Gaethjesus but I think the idea that Gaethje is a bad matchup for Khabib is incorrect. Gaethje has great wrestling credentials but cannot match Khabib physically. So Khabib will win and afterwards, he’ll call out Tony Ferguson. Khabib is obsessed with his legacy and even with Tony taking a loss, Khabib still wants that scalp to silence all possible doubters.

Option B: Tony fights Conor McGregor. Conor wants to fight again and while basically anyone in the sport would accept, Conor will only accept a special few. Tony now finds himself on that list. Watching that loss, Conor has to feel very confident in his ability to similarly outclass Ferguson on the feet, especially because that beating very likely altered “El Cucuy” for the worse. Plus, a win over Ferguson will essentially guarantee Conor a rematch with Khabib, which is his real goal.

Those are the only two options Tony should settle for at this point. His days as a top fighter are numbered and taking a fight with Dustin Poirier or Dan Hooker or someone is just going to accelerate his fall. “El Cucuy” has a short window to really cash in and I think he’s going to take advantage of it.

Out of all the early stars in the UFC, who would you like to see come back as an on air personality or commentator? Personally, I really miss Randy on the broadcasts. He forged the path that Dominick Cruz is walking as an analyst right now.

He’s not an early star, but boy do I miss Brian Stann on the mic. He remains the best the sport has ever seen.

Similarly, Frank Mir was almost always a very good commentator and the UFC’s reluctance to use him when they had him was always a bit shocking. I’m assuming it was a money thing.

But if you’re talking the first 20 or so events, the only people who would make any sense at all would be Randy Couture, Frank Shamrock, and Bas Rutten. Randy and Frank are decent commentators but nothing to write him about. Bas is mostly bad at the parts of commentary he’s supposed to be doing but he’s the best personality of the bunch so give me him. It would be fun to have Bas Rutten go full Bas Rutten and watch Dominick Cruz’s eyeballs roll out of his skull.

Thanks for reading this week, and thank you for everyone who sent in Tweets! Do you have any burning questions about at least tacitly related to combat sports? Then you’re in luck because you can send your Hot Tweets to me, @JedKMeshew and I will answer them! Doesn’t matter if they’re topical or insane. Get weird with it. Let’s have fun.