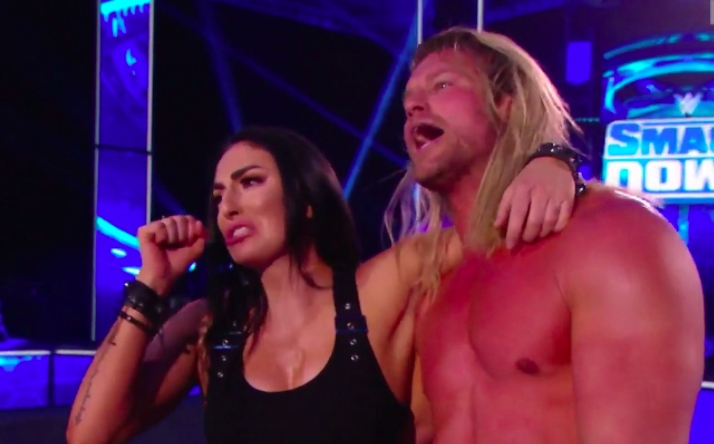 – Braun Strowman opened the show with a promo about winning the Universal Championship at WrestleMania. He was interrupted by Shinsuke Nakamura, who wanted an opportunity against him. Cesaro tried to sneak attack Strowman but failed, but it allowed Nakamura to hit a kick to Strowman’s head.

1. Women’s Tag Team Championship Match: Alexa Bliss and Nikki Cross (c) defeated the Kabuki Warriors. Bliss punched Kairi Sane in the face, and Cross followed it up with a neckbreaker to win the match.

2. Dolph Ziggler defeated Tucker. Before the match, Tucker showed Ziggler and Sonya Deville photos of Otis and Mandy Rose working out together. Ziggler won with a superkick.

– The Miz and John Morrison tried to perform their song ‘Hey Hey’ live, but were interrupted by The Usos, who complained about Miz not being in the Tag Team Championship match at WrestleMania. They were interrupted by New Day, and Big E suggested that since one member of each team had a triple threat at WrestleMania, the other three should have a triple threat. Next week it’ll be Jey Uso vs. The Miz vs. Big E for the Smackdown Tag Team Championship.

– Carmella and Dana Brooke asked Alexa Bliss and Nikki Cross for a Women’s Tag Team Championship match, and the champions agreed to it.

– Bayley and Sasha Banks cut a promo about Bayley’s win at WrestleMania. They were interrupted by Tamina, who was eliminated first at WrestleMania, who said nobody beat her at WrestleMania. Bayley agreed to give her a Smackdown Women’s Championship match if she can beat Sasha Banks next week. Banks was upset at being volunteered for the match.

– A special look was taken at Jeff Hardy.

5. Braun Strowman defeated Shinsuke Nakamura with a powerslam. After the match, Bray Wyatt interrupted via the Firefly Funhouse and set his sights on Strowman’s Universal Championship, saying he brought Braun Strowman into this world, and that he can take him out.