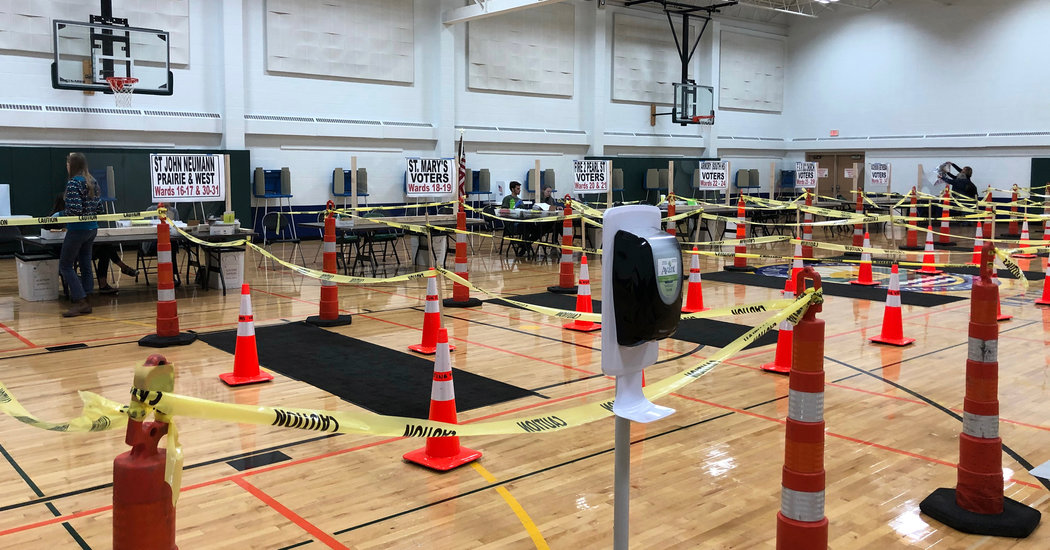 MILWAUKEE — Wisconsin voters will face a choice between protecting their health and exercising their civic duty on Tuesday after state Republican leaders, backed up by a conservative majority on the state’s Supreme Court, rebuffed the Democratic governor’s attempt to postpone in-person voting in their presidential primary and local elections. The political and legal skirmishing throughout Monday was only the first round of an expected national fight over voting rights in the year of Covid-19.

The Republicans’ success came at the end of a day that left anxious voters whipsawed between competing claims from the governor, Tony Evers, and his opponents in the G.O.P.-controlled State Legislature over whether Tuesday’s election would proceed as planned. It rattled democracy in a key battleground state already shaken by a fast-growing number of cases of the coronavirus.

The governor had issued an executive order postponing in-person voting and extending to June the deadline for absentee ballots. But Republican leaders succeeded in getting the state’s top court to stay the decree.

And in a decision late Monday capping the election-eve chaos, the U.S. Supreme Court’s conservative-leaning majority dealt its own blow to Wisconsin Democrats. In a 5-4 vote, the majority ruled against their attempt to extend the deadline for absentee voting in Tuesday’s elections, saying such a change “fundamentally alters the nature of the election.” The court’s four liberal members dissented, with Justice Ruth Bader Ginsburg writing that “the court’s order, I fear, will result in massive disenfranchisement.”

On the surface, it was exceedingly high drama for what amounts to a seemingly foreordained Democratic primary vote between the likely nominee, former Vice President Joseph R. Biden Jr., and Senator Bernie Sanders, who trailed substantially in a recent Wisconsin poll; a host of local contests; and a general election for a seat on the State Supreme Court now held by a conservative.

But what happens in Wisconsin has far broader implications for both parties.

The state stands as a first test case in what both national parties expect to be a protracted fight over changing voter rules to contend with the pandemic — potentially the biggest voting rights battle since the passage of the Voting Rights Act of 1965. Mr. Evers was trying to push Wisconsin still further toward voting by mail.

Since the pandemic first forced stay-at-home orders across the country, many Democrats have advocated a universal vote-by-mail system in November. Republicans in several states and the president himself are pushing for as much in-person voting as possible.

Indeed, for the better part of the last two decades, Republicans have sought to tighten voting restrictions — pushing stringent new voter identification requirements and sweeping voter roll purges that disproportionately affected people of color, the poor and the young. They have done so, they say, to curb in-person voter fraud, which, despite their claims to the contrary, is exceedingly rare.

“Wisconsin is just a microcosm. And it presents questions that the nation will soon have to grapple with,” said former Attorney General Eric H. Holder Jr., who now leads an organization focused on gerrymandering and voting equality. “It’s a test of our democracy. And the question is, ‘Are we up to passing that test?’”

What’s more, the State Supreme Court contest is no small matter: The winner could play a pivotal role in deciding a partisan fight over a Republican-supported move to purge voters from the state rolls, which could greatly affect the November election results in a tightly contested battleground state that was central to President Trump’s 2016 victory. The race is so important to Republicans that Mr. Trump weighed in with a personal endorsement for the incumbent, Daniel Kelly.

Until now, Mr. Evers had stopped short of acting on his own to move the election, instead urging the Republican-controlled State Legislature to do so as Democrats forced a court decision that extended the deadline for mailed absentee ballots to April 13. Republicans denied his request to move the election and sued to block the mail-in vote extension, ending in victory at the Supreme Court on Monday evening.

The stakes were apparent in the lawyers involved in the Supreme Court fight. The Democratic team included the party’s top election lawyer, Marc Elias; among the law firms representing the Republicans was Consovoy McCarthy. The firm is currently helping Mr. Trump to fight congressional demands for his tax returns, and a named partner helped argue a 2013 Supreme Court case that gutted the powerful protections of the Voting Rights Act.

As countless Republican investigations over the years have failed to produce proof of widespread, in-person voter fraud, Democrats have asserted that the Republicans’ main goal was to reduce voting by those from expanding portions of the electorate — people of color and the young — who tend to vote for Democrats over Republicans.

Mr. Trump, whose false claims about voter fraud have gone far beyond anything ever alleged by his Republican predecessors, appeared to openly say as much last week when he complained about Democratic vote-by-mail proposals in Congress. “They had levels of voting that, if you ever agreed to it, you’d never have a Republican elected in this country again,” he said on “Fox and Friends.”

His Republican allies echoed the sentiment, including in tweets like one from Representative Thomas Massie of Kentucky: “Universal vote by mail would be the end of our republic as we know it.”

Justin Clark, a senior counsel to Mr. Trump’s campaign, accused Democrats of seeking to “redesign the entire U.S. election system” with proposals for “one-size-fits-all federal legislation,” which he called “irresponsible.”

Mr. Clark said the campaign believed mail balloting could “play a role during a pandemic by enabling at-risk voters to vote safely,” but said the particulars should be left to the states, most of which already allow some mail balloting.

At issue are proposals from two Democratic senators, Amy Klobuchar of Minnesota and Ron Wyden of Oregon, to pay for a secure expansion of mail voting and provide easier access to mail-in ballots while lengthening early voting periods. The $2 trillion coronavirus relief package included $400 million in financing for voting — below the $2 billion, at least, that Democrats say is required — and did not include the other provisions.

Mr. Trump, who registered to vote by mail in the Florida primary, appeared to be referring to the proposed expansion of early voting when he complained that Democrats “had things in there about election days,” which he called “totally crazy.”

In an interview, Ms. Klobuchar said Democrats would keep pressing for more money and reforms in future bills, putting special emphasis on longer early voting periods, which would lessen crowds at polling sites. “Trump coming out against that is a travesty,” she said. “They are literally telling senior veterans they have to choose between their health and voting.”

Even before the virus struck, Republicans and Democrats were girding for a record number of voting rights lawsuits throughout the states over voter identification provisions, the location of polling sites, and moves to purge voter rolls. But the pressure to move to more voting by mail has intensified the maneuvering, and shifted its focus to absentee balloting.

“Covid obviously adds an additional concern that voting rights will be harder to exercise,” said Mr. Elias, the Democratic lawyer. “Therefore the need for courts to step in will be even greater.”

Mr. Clark, the Trump campaign counsel, said Republicans would fight moves by Democrats to push provisions that would allow door-to-door canvassers to collect unlimited numbers of absentee ballots, which he called “ballot harvesting.” Signaling that it would be a major point of contention with Republicans, the Republican National Committee chairwoman, Ronna McDaniel, wrote in a Fox News opinion article, “The Democrats’ all-mail ballots proposal is a ruse to legalize ballot harvesting nationwide.”

Richard L. Hasen, a professor of law and political science at the University of California, Irvine, School of Law, who follows the battle over voting closely, said that mail was more vulnerable to tampering than in-person voting.

“We know that voter fraud, while very rare, more commonly occurs with absentee ballots than in-person balloting,” he said. But, he warned, Republicans should not use that as a reason to find more ways to curtail it. “While there are legitimate reasons to worry about increased vote by mail,” he said, “it’s not legitimate to fear increased vote by mail because it means that more voters would be able to vote.”

Despite the position of the national party and legislators, several Republican governors and secretaries of states have, in fact, embraced increased mail voting, among them Gov. Mike DeWine of Ohio, who signed off on a mail-only primary, and the Iowa secretary of state, Paul Pate, who mailed absentee ballots to all of the state’s registered voters.

But both parties were preparing for all-out war in battleground states like Michigan, Pennsylvania and Wisconsin, which Mr. Trump’s campaign views as critical to his re-election prospects.

“I hope not, but I fear Wisconsin is a preview of what we’re about to see in the rest of the country,” said Ben Wikler, the chairman of the Wisconsin Democratic Party.

Mr. Wikler said that the Republicans had been seeking to stick to the April 7 in-person election date to ensure low turnout, which, he said, would be a potential boon to Mr. Kelly, the conservative judge up for re-election. “I think it creates a perceived opportunity, even if the public health consequences are ghastly,” Mr. Wikler said.

He later tweeted that the Supreme Court decision would “consign an unknown number of Wisconsinites to their deaths.”

In interviews, Republican county leaders largely played down the threat of the coronavirus and called the risk overstated. Facebook pages for one county urged residents to vote Tuesday in an important State Supreme Court election, saying “the Left is up to their Lawlessness and corrupt tactics to disrupt and turn the election.”

“Not that big of a deal,” Scott Bolstad, the chairman of the Eau Claire County Republican Party, said of the coronavirus threat.

“I think this is a last-ditch effort to change the results,” said Jim Miller, the Republican county chairman in Sawyer County. “People will think it’s been moved until June. Even if it does go on, I don’t know how we put this back in the bottle.”

Even some Democrats on Monday were uncertain whether the governor, whose office was stripped of considerable power by the Republican Legislature, would win the legal fight.

In an interview earlier, Mayor Tom Barrett of Milwaukee would not directly say whether he felt the city’s residents should vote Tuesday. Mr. Barrett said holding an election under such circumstances went against “every tenet of public health,” but he also wanted people to participate. He never mentioned the possibility that the governor could use emergency powers to move the election.

Early voters in his city had been proceeding apace. On Sunday, Isral DeBruin, a communications professional, was sitting in his Honda Accord, snaking his way in a line of cars to a poll worker, wearing a mask and gloves and holding a clipboard, who oversaw an early-voting drive-through station. Mr. DeBruin’s absentee ballot had not come yet in the mail, and with all the wrangling over the deadline, he decided to brave the viral elements and vote by car.

“Nobody should have to do this,” he said. “I have no doubt there will be people who are disenfranchised because of this complete mishandling of democracy. Others will get sick. Some will die.”