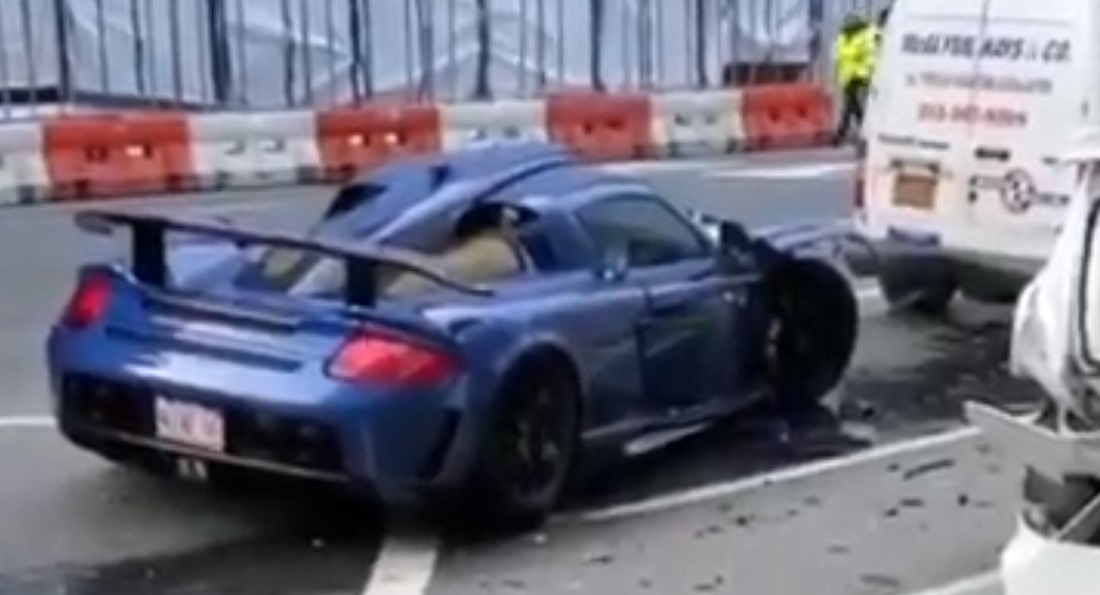 We spoke to an NYPD detective covering the case who told us that the incident happened at around 7:30 AM EST, and contrary to some initial reports, the vehicle was not stolen. The driver / owner will likely be charged with speeding, reckless driving and possibly a few other traffic violations too. While the police report isn’t out yet, the detective told us that they are not aware of any injuries related to the incident at this time. (Update 1)

Here’s the New York Police Department’s account of the incident:

“On Tuesday, April 7, 2020 at approximately 0730 hours, officers responded to a motor vehicle collision in the vicinity of West 44 Street and 11 Avenue, within the confines of the Midtown North Precinct,” Detective Sophia Mason told CarScoops in an email statement.

“Upon arrival officers observed a 33-year-old male operator and sole occupant of a 2014 Porsche Gemballa Mirage GT conscious and alert at the scene. Further investigation revealed that the operator of vehicle #1 struck the rear of a parked unoccupied vehicle #2 and fled southbound on 11 Avenue in his vehicle. Vehicle #1 proceeded to strike vehicles #3,4 and 5 that were also parked and unoccupied vehicles in the vicinity of West 44 Street where his vehicle came to a rest. The suspect was taken into custody at the scene and charges are pending.” (Update 2)

NYPD told CarScoops that it arrested 33 year old Benjamin Chen (who appears to go by the name Ben Chen on social media) and charged him with operating a motor vehicle impaired by drugs and reckless driving. (Update 3)

A pricey Gemballa Mirage GT wreaked havoc on the streets of New York City this morning as its driver crashed into several vehicles before being stopped by police.

A video posted on social media shows the car apparently slammed into a van and a crossover. Instead of stopping, the driver of the Gemballa fled the scene – running a red light in the process. However, the car was heavily damaged in the collision and it’s hood can be seen flying off as it sped away.

Also Read: Gemballa Mirage GT Is A Carrera GT With The Midas Touch (And Price)

While the clip ends there, Fox 5 reports the super car left a “trail of damaged vehicles” along 11th Ave.  The station goes on to say the Mirage GT was eventually surrounded by officers who brought the vehicle to a halt.  The driver was reportedly arrested, but police didn’t release their name or a possible cause for the hit and run.

The station also posted pictures of the car and they show it suffered significant damage. Besides missing a hood, the front end was smashed and the windshield was shattered.  The rear end has also seen better days as the left section of the bumper broke off and there appear to be major mechanical damage.

The vehicle wears a Massachusetts plate reading “Nine 80.”  The latter is worth mentioning as the car has appeared in numerous YouTube videos over the years (see below).