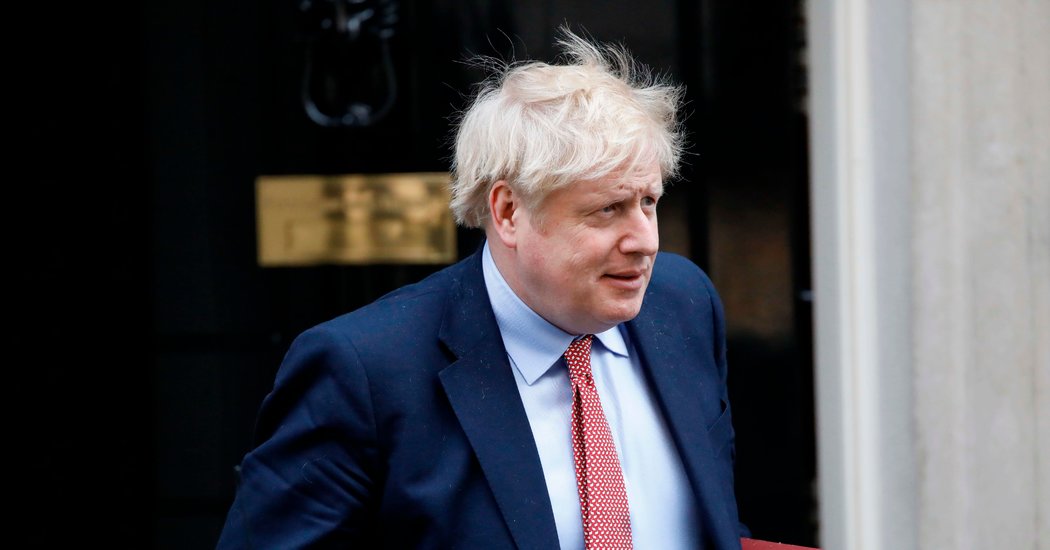 LONDON — Prime Minister Boris Johnson was moved into intensive care on Monday, a worrisome turn in his 10-day battle with the coronavirus and the starkest evidence yet of how the virus has threatened the British political establishment and thrown its new government into upheaval.

The government said the decision was a precaution and that he had been in good spirits earlier in the day. But with Mr. Johnson’s aides releasing few details about his condition, the nation kept a tense vigil on Monday night, hoping for the best and experiencing, together, the frightening mysteries of this disease.

In a sign of how grave the situation had become, Downing Street said in a statement on Monday that Mr. Johnson had asked the foreign secretary, Dominic Raab, to deputize for him “where necessary.” The pound fell against the dollar after investors reacted to the news.

After noting earlier in the day that the prime minister was still getting official papers, Mr. Johnson’s aides said he had been moved to the intensive care unit in case he needed a ventilator to help his recovery. Not every patient in critical care is ventilated, medical experts said, but many are — or are at least given oxygen. The prime minister remains conscious, officials said.

For Mr. Johnson, 55, it was an especially cruel reversal. Just four months ago, he engineered the greatest Conservative Party victory since Margaret Thatcher in 1987, delivered his promise to take Britain out of the European Union, and set in motion an ambitious economic program to transform his divided country.

Now, Mr. Johnson, a political phenomenon whose career has always had a quicksilver quality, finds himself in a debilitating battle after contracting a virus he initially viewed with characteristic nonchalance.

For Britain, which had so recently emerged from three-and-half years of paralysis and polarization over Brexit, Mr. Johnson’s illness plunges the country back into the uncertainty Britons thought they had left behind.

When the prime minister announced on March 27 that he had tested positive for the virus, he insisted he would remain firmly in charge of the government’s response to the virus, chairing the daily crisis meetings by video while self-isolating.

It had been an occasionally shaky performance until then: The government initially debated how aggressively it would try to curb the spread of the pathogen. That contributed to an inadequate, poorly organized testing program, and reinforced Mr. Johnson’s reluctance to impose a strict lockdown on his country.

In recent weeks, Mr. Johnson had seemed more in command. Britain has pledged to test 100,000 people a day by the end of this month. And the prime minister has become an ardent, if relentlessly cheerful, advocate of social distancing.

Even after Mr. Johnson had isolated himself in his apartment next door to 10 Downing Street he released a shaky, handheld video on Friday, in which he warned people not to crowd parks during a sunny spring weekend.

Mr. Johnson’s aides predicted he would emerge from isolation that day. But he said he was running a temperature and suffering a cough. Two days later, he was admitted to St Thomas’ Hospital in central London, still suffering from those symptoms.

On Monday, Downing Street said in a statement, “Over the course of this afternoon, the condition of the Prime Minister has worsened and, on the advice of his medical team, he has been moved to the Intensive Care Unit at the hospital.”

Mr. Johnson’s hospitalization coincided with a call by Queen Elizabeth II for Britons to face the pandemic with the stoicism and self-discipline they showed during World War II. Her rare televised address reassured many, but barely an hour later, they were jolted by news of Mr. Johnson’s deteriorating condition.

On Monday, the government tried to put a good face on the situation. Mr. Raab told a news conference that Mr. Johnson was in good spirits after a comfortable night in the hospital, a short distance from Downing Street. He said Mr. Johnson remained “in charge” of the government and was working from his hospital bed.

But Mr. Raab, who chaired the daily coronavirus meeting on Monday morning, admitted he had not spoken to the prime minister since Saturday. The paucity of details on the prime minister’s condition or any sign of ongoing communication between him and Mr. Raab deepened the unease.

Mr. Johnson wrote from the hospital on Twitter that he had undergone “some routine tests” because he was still experiencing symptoms. He also thanked health workers for taking care of him.

In a Twitter post, Andrew Neil, one of the country’s most prominent interviewers, asked why Mr. Johnson had not spoken to his stand-in, Mr. Raab, since Saturday. “Something not right here,” Mr. Neil added.

In Britain, patients who experience symptoms of the virus are being encouraged to stay at home if possible, a policy that suggested Mr. Johnson’s condition at least crossed some threshold of seriousness to warrant hospital admission at a time when the health service is stretched.

British politicians from across the political spectrum offered their best wishes, as did the French president, Emmanuel Macron, who said he hoped Mr. Johnson would make a swift recovery. Buckingham Palace said Downing Street had informed the queen of Mr. Johnson’s condition.

Lindsay Hoyle, the Speaker of the House of Commons, said in a statement, “This is terrible news. I know the thoughts and prayers of everyone across the House are with the Prime Minister and his family right now.”

On Monday, at his daily briefing, President Trump wished Mr. Johnson well. “Americans are all praying for him,” he said. “He’s been a really good friend.” The president suggested that American pharmaceutical companies could aid the prime minister by supplying therapeutic drugs, although there are not yet any proven treatments. He also said he and other senior officials would take more tests for the virus in light of Mr. Johnson’s ordeal.

Mr. Trump has had an affinity for Mr. Johnson, whom he views as a like-minded populist. While the two leaders have similarities — including their initially skeptical view of the threat posed by the virus — they are quite different. Mr. Johnson, for example, has described his approach to the virus as guided by science. In news conferences, he has typically deferred to his scientific and medical advisers — unlike Mr. Trump, who has constantly promoted an unproven anti-malaria drug as a potential treatment, going well beyond the advice of doctors and public health experts.

The prime minister first experienced the symptoms of the virus on March 26, was tested that day and received a positive result around midnight, going into self-isolation in Downing Street, but chairing meetings by videolink.

Even people with mild infections can have pneumonia, which is detected with CT scans. Sometimes the illness turns more severe in the second week — the stage where Mr. Johnson is now — with increased breathing difficulty and worsening pneumonia. Blood tests may detect greatly elevated levels of inflammation, a sign that the immune system may be overreacting to the infection. Dr. Anthony S. Fauci, director of the National Institute of Allergy and Infectious Diseases, has warned about some patients taking such a sudden turn for the worse after a week.

Until just weeks ago, Mr. Johnson had taken a more lax approach to the virus than had other many European leaders. At a news conference in early March, he described visiting a hospital where he said there were coronavirus patients.

“I shook hands with everybody, you’ll be pleased to know,” he said, “and I continue to shake hands.”

Later, the prime minister hesitated to force pubs and restaurants to close, even as he asked people to stop packing them, and he left schools open after France and Germany closed theirs.

The prime minister is not thought to have any pre-existing medical conditions though he has admitted to struggling with his weight, particularly during a period when he served as foreign secretary and traveled extensively.

In 2018, he wrote in an article that he had cut out some high-calorie foods because he had reached about 230 pounds. For Mr. Johnson’s height — 5 feet 9 inches — that weight would medically be defined as obese, and obesity increases the risk of a more severe illness in patients with the coronavirus.

Several other key figures in the government have self-isolated after suffering symptoms of the coronavirus, including the health secretary, Matthew Hancock, and the chief medical officer, Chris Whitty, both of whom have now returned to work.

Prince Charles, the queen’s eldest son and heir, suffered mild symptoms and quarantined himself at his residence in Scotland. He emerged from isolation last week to dedicate, via video, a field hospital in London.

Mr. Johnson’s 32-year-old partner, Carrie Symonds, who is pregnant, disclosed on Saturday that she, too, had experienced symptoms.

On Monday, Mr. Raab said that it was too early to discuss an exit strategy from Britain’s lockdown, arguing that the focus should remain on social distancing measures designed to curb the spread of the virus.

According to statistics released on Monday, more than 51,000 people had tested positive for the virus in Britain and 5,373 people had died, though there was some cause for optimism from figures that showed the rate of hospital admissions slowing.