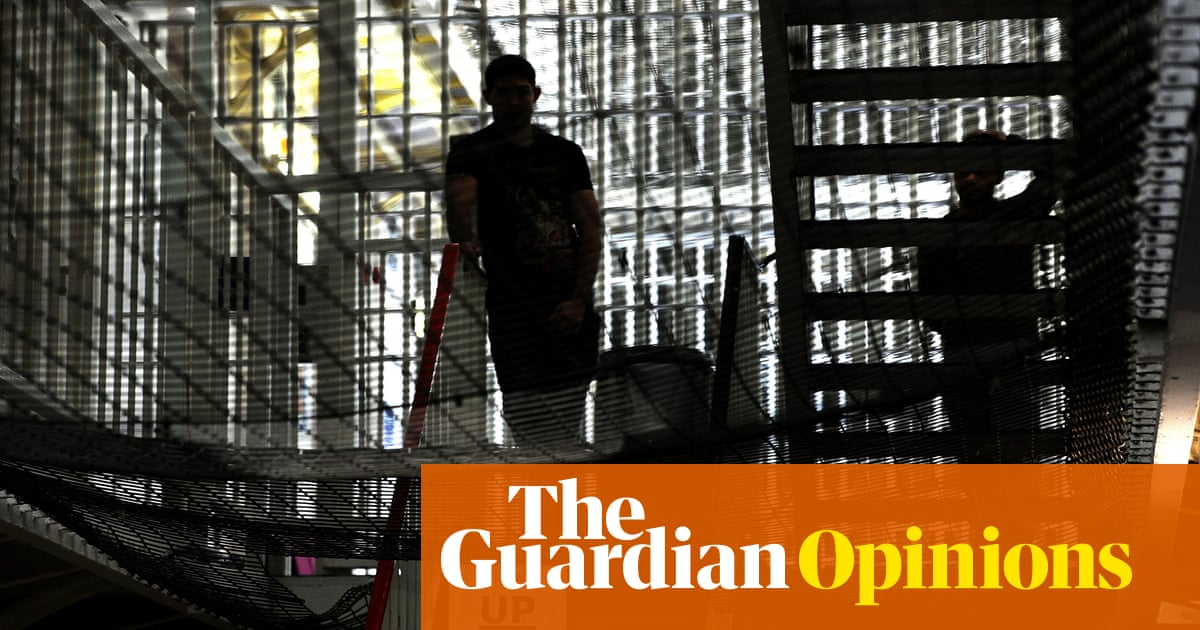 So you’re locked down and you’re a bit scared, but you’re safe. George is 70 years old and he’s locked up. He has served two years of an eight-year sentence and is expecting to be released by 2022. If he lives that long. He had no idea when they put him inside that fraud could carry the death penalty but that’s what he’s facing now. Because George is one of the 2,000 prisoners already identified by justice secretary Robert Buckland as having an underlying health issue that, were they in the wider community, would require shielding.

But in jail his safety is outside his control. Any prison officer – many of whom are still pleading for PPE – can come in and out of his cell, and there’s nothing he can do about it. His wing has been designated the isolation wing for prisoners with Covid-19, so he knows he’s in close contact with the virus: in fact, prisoners who have tested positive are frequently sharing cells with those who have not. Try observing social distancing in a cell that was only ever built for one person.

If you’re releasing prisoners into the community, you need a solid support network

To say that George is terrified every time the door opens is an understatement. He’s now in his cell for more than 23 hours a day, with less than an hour to walk around the yard, and there’s no education, no library, no gym, no recreation and no access to information. That leaves only fear. He’s one of the forgotten. Detained by the state, which has a duty to keep him safe. Instead, it threatens his life because jail, even more so than its upmarket cousin the cruise ship, is a petri dish for infection.

Latest ministry of justice figures show three deaths, and a 20% increase in cases of the virus in three days (from Thursday to Sunday) to 107 prisoners across 38 prisons and 19 staff across 12 prisons, and that’s with patchy testing. There could be 800 avoidable deaths in prison, University College London’s department of epidemiology has estimated, unless vulnerable inmates are effectively cocooned: a conservative figure compared with the justice minister’s own estimate of 2,000.

The government has shown no concern for the acute distress caused by the fact that the greatest number of prisoners ever are guarded by the fewest staff ever. It has been indifferent to the record number of assaults, self-harm, ambulance call-outs, suicides and other deaths in custody. By whatever measure you like, the government, led by the media venom towards a small group of terrorist offenders, has spent a decade making things worse.

There’s only one right thing to do with George and that’s release him. He’s 70 and he’s not a danger. There are many thousands of prisoners like George and it’s time for them to be let out.

And now, thanks to Covid-19, the government has bowed to universal pressure. Pregnant prisoners are out and those with weeks of their sentence to go will soon be leaving. And last week ministers announced that 4,000 offenders in England and Wales could be “temporarily released” .

But these measures will not be enough to halt the spread of coronavirus in a prison estate of 83,000. What’s needed is a massive reduction in the prison population. And when prison numbers are finally down, let’s keep them down. If prisons are kept for the most dangerous, it would result in jails that are actually less dangerous and better managed, and that means, yes, less reoffending.

George has two years left, so his release isn’t even on the cards yet. Surely the 1,700 prisoners over 70 years old must be the next to leave? Although he doesn’t have anywhere to go, which used to mean sleeping rough or going to a shelter. Now, thanks to the pandemic, local authorities are housing the homeless, providing hotels and university halls to stop them spreading viruses on the streets.

However it’s not that straightforward. A lot of people think that all you have to do for the homeless is give them a bed. This doesn’t recognise the mixture of addiction, mental health issues and poverty that lie behind homelessness – and a lot of prison sentences too. If you’re releasing prisoners into the community, you need a solid support network. It’s unfortunate, then, that these prisoners, with their complex needs, will be released at a time when those support services are contracting dramatically.

For this sector, support has always been face to face. Now, the drop-in centres where food and help was once available aren’t there. Offender management is no longer about two people in a room. The internet and call centres are a means of communication incompatible with poverty, where there’s no access to phones, data or sim cards. You’re on a probation order and you don’t know where or how or when you should be reporting. You live in fear of a breach, but you have no way of communicating. What about the addicted who are trying to get clean and live the 12-step programme? They can’t join online meetings if they don’t have the tech.

There’s only one solution: money, free phones and wifi. After all, the government has been quick enough to hand it out to businesses and airlines, so let’s have it for the unheard poor.

Why must it take Covid-19 for the government to stop pursuing its relentless, uncaring, punitive policies and do the right thing? We won’t forget.

• Mark Johnson is founder and chief executive of User Voice, a charity that works in prisons and the community