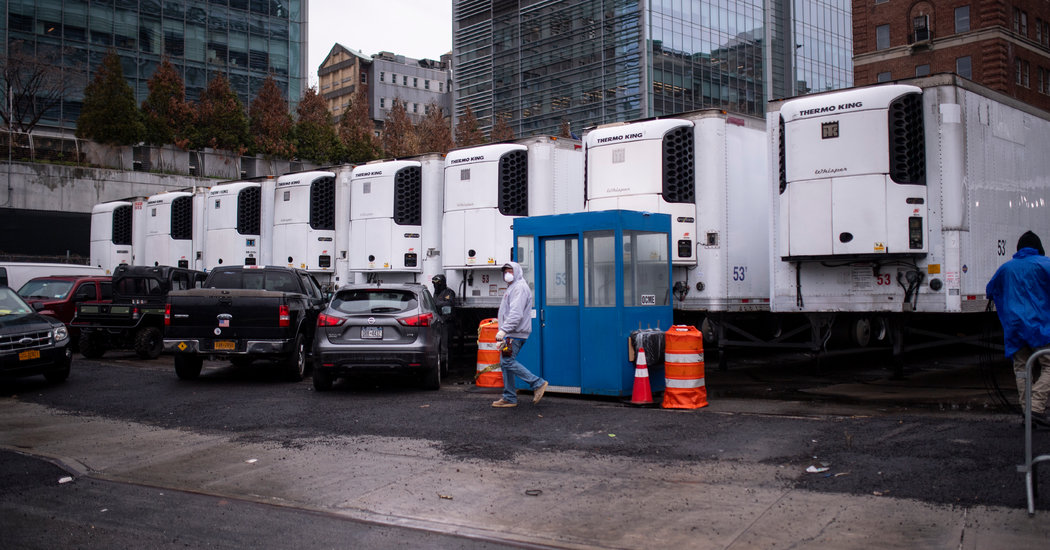 New York City has already set up 45 new mobile morgues. Local crematories are now allowed to work around the clock. At one Brooklyn hospital, the in-house morgue was filled to capacity on Tuesday. The next day, the nursing staff ran out of body bags.

As the coronavirus epidemic enters its second month, the casualties in New York are starting to severely tax the city’s ability to accommodate its dead. With more than 1,000 deaths so far and thousands more projected, city officials are working hard to stave off an emergency.

In the past few days, the city’s medical examiner’s office has taken over the collection of bodies, dispatching the fleet of new refrigerated trailers to hospitals in all five boroughs, some of whose morgues have already filled up. Funeral homes are becoming backed up. And, running on smaller staffs, cemeteries and crematories are scrambling to keep up with demand.

So far, officials say, the longstanding system for picking up and disposing of bodies in New York has not completely broken down; the city is not at an immediate risk for a secondary health crisis with corpses stacked in churches or lying in the streets, as has been the case in some Italian cities.

But at every step of the process — from hospitals to funeral homes to city-run morgues — people are feeling the strain of the sharp increase in deaths and acknowledge that it is only a prelude of the flood that is sure to come.

On an average day, 158 people die in New York City from every imaginable cause. But with at least that number dying daily from the coronavirus alone — and with dire predictions that as many as 16,000 people could ultimately perish — the usual method of funeral homes collecting bodies from hospitals and working with families to bury or dispose of them is being severely tested.

“Most of these hospitals’ morgues only have room for eight to 12 bodies,” said Joe Aievoli, who owns six funeral homes in Brooklyn and Manhattan. “Now, they’ve been inundated with 30, 40, 50 deaths within a short period of time. They just don’t have the capacity to store.”

New York City has already placed emergency officials and the office of the chief medical examiner in charge of identifying and picking up the dead.

In normal times, the medical examiner’s office has room for up to 900 bodies at its five facilities across the city, according to a spokeswoman, Aja Worthy-Davis.

Ms. Worthy-Davis said the office has purchased the 45 mobile morgues to boost its capacity to handle about 3,500 bodies. Another 85 of the refrigerated units are expected to be delivered soon by the Federal Emergency Management Agency.

In the meantime, said Thomas Von Essen, the agency’s regional administrator, the U.S. Department of Defense has agreed to send 42 mortuary affairs officers to help the medical examiner’s office to run the mobile morgues. The New York Air National Guard has also sent a 12-person team to help control the flow of bodies from the hospitals, Ms. Worthy-Davis said.

The mobile units — refrigerated trailers equipped with shelves to store remains in plastic body bags — have already been put to use in places like Brookdale Hospital in Brooklyn. One doctor there said the flow of bodies passing through was “like a conveyor belt.”

The hospital’s morgue can store 25 bodies, but it had reached capacity by Tuesday. Orderlies began shifting the overflow to one of the trailers, and that too was quickly filling up.

“The practice is we hold bodies until the funeral homes make arrangements to pick them up,” a spokeswoman, Khari Edwards, said. “Unfortunately, the funeral homes have either been overwhelmed or are not picking up bodies.”

Mike Lanotte, who runs the New York State Funeral Directors Association, said this “bottleneck” had occurred because some cemeteries have started to reduce their staffs and hours in response to the pandemic and have scaled back on the number of bodies they are burying in a day.

“What we’re trying to avoid is the catastrophic situation where we have a backlog,” Mr. Lanotte said.

But backlogs have already begun to appear. Mr. Kearns said that “every part of the system” was experiencing delays and added he was worried that as the casualties began to mount, the problems would get worse.

Funeral directors, he explained, have found themselves caught between the speed at which bodies are coming out of the hospitals and the slowness with which cemeteries and crematories are able to dispose of them.

To address the problem, Mr. Lanotte said he has been reaching out to the cemeteries directly and asking them to return to normal schedules.

City environmental officials have also eased restrictions on local crematories, permitting them to work all day and night until June 30.

Phil Tassi, an officer at Ferncliff Cemetery in Westchester, just north of New York City, said the crematory there usually cremates 12 bodies a day, but on Tuesday it processed 38 before 11 a.m.

“We’re running 16 hours a day, and we’ve hit capacity where we have to set limits because we can’t keep up with the number of bodies coming in,” Mr. Tassi said. “We have never had weeks like this.”

City officials have been planning for an emergency like this for at least a dozen years. In 2008, the medical examiner’s office published the “Pandemic Influenza Surge Plan for In- and Out-of-Hospital Deaths,” a 93-page document that envisions a nightmare scenario in which more than 50,000 people die in an outbreak in New York over the course of just two months.

The plan takes into account not only the chaos that would likely erupt at hospitals and funeral homes, but also the panic that could easily ensue as residents begin to haul the bodies of their loved ones from their homes and deposit them at firehouses and police stations.

The medical examiner’s office has already enacted at least some parts of “Tier One” of its plan, sending mobile cold storage units to hospitals and easing restrictions on crematories.

In the second part of the plan, the medical examiner’s office would start sending bodies to the potter’s field on Hart Island in the Bronx, where they would be buried by inmates from the city’s main jail at Rikers Island. The coronavirus has wracked Rikers Island, where nearly 200 inmates have tested positive.

Under the final phase of its plan, the medical examiner’s office would coordinate with all local cemeteries to bury the dead in the “temporary mass internment method.”

“Ten bodies in caskets are placed lengthwise in a long narrow section in the ground,” the plan explains. “The foot end of one casket is placed in close proximity to the head end of the next.”