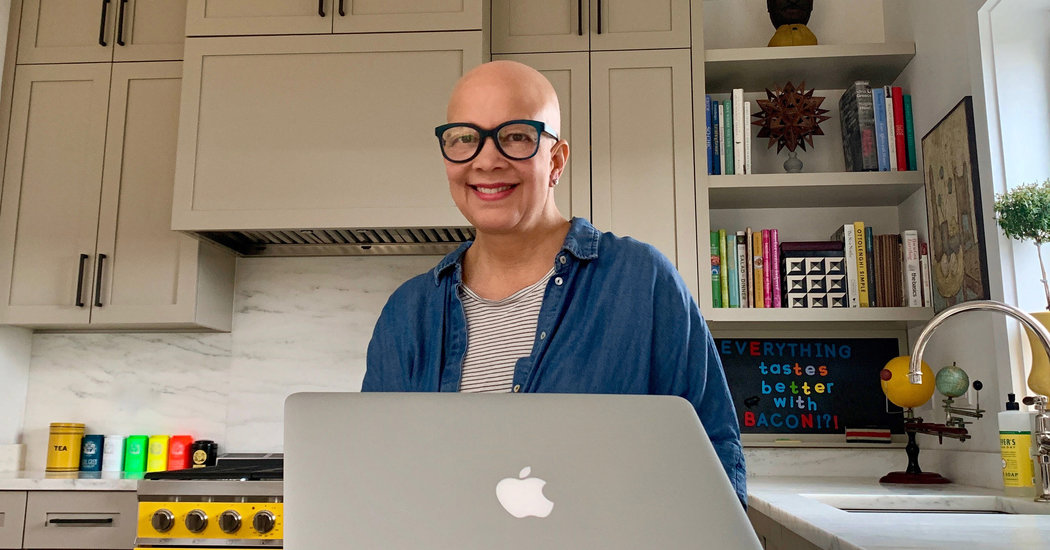 As Americans dutifully sequestered themselves into their homes last week, enacting their own versions of Emma Donoghue’s novel “Room” (flopping down on Rug, Sofa and Bed, perhaps fighting over Vacuum and Dishes, united in dreams of Outside), they took their pleasures where they could.

One popular distraction has been the window into other people’s rooms: the glimpses of the domestic habitats of colleagues, celebrities and newscasters that video meetings, Twitter P.S.A.s and home broadcasts are affording us. The blurry visuals and weird angles have been a tonic for the overwrought environments of Instagram (corgis quarantining in Quogue) — more Loud, as in the seminal 1973 PBS documentary, “An American Family,” than Kardashian.

The real thrill is the décor peeping. The code switching signaled by the elegant millwork and beautifully bound classics behind the shoulder of your hoodie-wearing boss; the glossy leaves of a philodendron that derailed an entire staff meeting; the animal hide in a new manager’s bedroom. A colleague’s baby. Anderson Cooper’s bookshelves (the gilded bindings, and was that a faux-malachite wall finish?). Every newscaster’s bookshelves. Dan Rather’s swoopy white laminate kitchen and accordion blinds. The bark wallpaper in Jimmy Fallon’s house. Who can concentrate on the endless news?

“Nice friggin’ kitchen!” Sara Sheehan, a producer and documentary filmmaker in Westchester County, N.Y., blurted out in the middle of a strategy meeting with a male colleague. “Before the call I thought, Oh, young guy. Just starting out. Starter house. And then I saw the kitchen. The marble backsplash. The window treatments. I probably should have controlled my response. But your inner voice becomes your outer voice by accident and change of venue.”

It was the grommet curtains in William Brangham’s living room that set off Elaine Griffin, an interior designer in Brunswick, Ga. It’s a beautiful room, and Ms. Griffin was not the first to get bogged down by its details and tune out the reporting delivered by the very sober Mr. Brangham, a correspondent for PBS, who on the night in question was interviewing a hospital C.E.O. on the shortage of medical supplies and the terrible challenges her workers were facing.

Ms. Griffin, briefly, allowed herself an escape. She was clocking the white sofa, and was that a John Robshaw pillow? Was the painting above actually fiber art? It seemed to have a texture to it.

She noted the fireplace and the bookshelves, more elegant than most. So why, Ms. Griffin wondered, “does he have the $19.99 panels from Bed Bath & Beyond? Grommet curtains are the drapery equivalent of a No. 1 with fries. He has a fireplace! Why did he cheap out on the curtains?”

With some vehemence, Ms. Griffin then delivered a stern tutorial on how to hang curtains: just below the ceiling and at least four inches on either side of the window trim, a lesson apparently not followed by Mr. Brangham. She then pivoted to the pair of bookshelves flanking the French doors behind Mr. Brangham’s head. “You know his ceilings are higher than eight feet. He’s in a million-dollar townhouse in Georgetown. Like, why don’t they go floor to ceiling?”

When citizens were urged into self-isolation or quarantine 100 years ago, they had but books and letters to comfort them. Now, we peer through the tiny eyes of our smartphones and laptops, and the world peers back. We have all become voyeurs, and critical ones at that.

“We can’t help it,” Ms. Griffin said. “We are visual creatures. It’s in our DNA to observe and judge. Everyone from the intern to the guy in the C-suite is having meetings from home. People decorate their homes to please themselves, and now it’s open judging season for folks they would previously have never invited over.”

The other night on MSNBC, Kasie Hunt was analyzing the $2 trillion aid package, but Ondine Karady, a Manhattan interior and set designer, for “Sex & the City,” among other shows, was fixated on the books to the left of Ms. Hunt’s head, which had been grouped by color: one shelf in red, and one in blue. Really? Was she telegraphing political objectivity? And if she had taken the time to style those shelves, why hadn’t she done so on the shelves below?

“It’s not that hard to straighten your shelves up if you know you’re going to be on TV every night,” said Ms. Karady, who is particularly irritated by what she sees as rampant pundit clutter. “Even Biden’s bookshelves are messy.”

She was charmed, however, by the potted ferns in Walter Isaacson’s elegant New Orleans living room. “Is he watering them himself?” she wondered of Mr. Isaacson, a journalist turned historian and biographer.

As the playwright Paul Rudnick scans the news, he too has been keeping an eye out for décor tips and “also hints of newscasters’ families, pets and sex dungeons,” he wrote in an email.

Mr. Rudnick added: “I’ve appreciated Dr. Max Gomez, a medical expert on CBS News, both for his helpful and sane answers to questions about the virus, and for the fact that he keeps changing locations in what looks like his very nice, immaculate apartment (a clean home gives me confidence in any doctor). Some nights he stands near various impressive pieces of furniture, and on other broadcasts we’ll catch a glimpse of tasteful, framed artwork. I’m always hoping that after he answers a question about social distancing he’ll say, ‘And now let’s talk about this lighting fixture’, but so far no luck.”

That is what happened, however, one evening recently, when a group of interior designers, all women, gathered in a Zoom meeting to discuss their work, severely curtailed like so many professions by the shutdowns, and strategize about the future.

But mostly they shopped each other’s rooms, a respite from talk about the calamitous economy: Bella Zakarian Mancini’s Matouk linens (she was “meeting” from bed); Sheila Bridges’s star-shaped ceiling sconces; Young Huh’s artwork (a Bernhard Edmaier photograph of the Alligator River in Australia that looks like a Venusian landscape, as imagined by C.S. Lewis); and Barrie Benson’s wallpaper.

Ms. Benson had prepared for the meeting by hanging samples of wallpaper she has been working on in collaboration with an artist, Jackie Gendel, from a couple of trouser hangers she affixed to a pair of closet doors. She sat in front of them, because, as she said, “the rest of my house was being turned into a home school and temporary architecture and design office.”

Speaking of wallpaper, Ms. Bridges was tickled to see her yellow Harlem Toile print in the dining room of Gayle King, a host of “CBS This Morning,” when Ms. King announced an interview with Mark Zuckerberg and Priscilla Chan about their plan to combat the virus. (And so was design Twitter.)

Some reveals are poignant: the decorative flourish as psychological tell. Manuel Sosa is a composer who teaches in the pre-college program at Juilliard; like many professors, he has been holding his classes in Zoom, a truly confounding environment for a musician as instruments cannot be shared there.

His students are teenagers, and for the first time he is seeing them in their bedrooms, with all the accouterments of childhood — stuffed animals, drawings, robot parts and flower stencils on the walls.

“When they pick up an instrument at school,” Mr. Sosa said, “they are so powerful, so mature, and yet from the bedroom you see the child is still there. It is where they rest and sleep, and they are more playful. Even their faces look different. It’s very tender. It’s a reminder to us that they are still kids and we have to safeguard that.”

Among those doing the safeguarding are therapists, of course — professionals who have been working from home since Freud, never good with boundaries, famously disregarded his own edict that the analyst be a tabula rasa, and exposed his patients to his wife’s cooking, his dogs and his collections of African art, among many other stimulating and personal objects. In that space, a sofa was never just a sofa, but an occasion for free association, a cue to unconscious thoughts and deeper feelings.

But maybe not this month.

Sue Kolod is a psychoanalyst with an office in Manhattan and a second home just north of the city, where she is now conducting sessions remotely for the first time, in a light-filled room with a view of the woods. Dr. Kolod spoke of “the frame”: a tenet of analysis that dictates that the rules and the setting of the practice be consistent, so the patient can turn his focus within.

Now that her frame has changed, her patients are curious.

“They are asking me questions about my room, how I am, where I am. This is a different game,” she said. “Before, I might say, ‘Now why do you ask that?’ I’ve been talking with some of my colleagues and it just doesn’t seem like the right way to handle it. Like everyone, my patients want to know that I am safe. Some are expressing envy, because many of them are stuck in the city, and also relief that I am OK. But like seeing one’s boss at home for the first time, it’s just going to amplify whatever feelings you had before and I am assuming that patients seeing me in this environment is also going to evoke more of the same. In analysis, it’s all grist for the mill.”

Even someone not in analysis can grasp that these peeks at other people’s private lives, albeit against the backdrop of a pandemic, evoke all sorts of emotions: admiration, sympathy, envy, or perhaps just a mild wistfulness for a more innocent time.

For the last two weeks, Emily Listfield, a novelist and branding consultant, has been holed up in her apartment in the Stuyvesant Town complex in Manhattan, working from her dining room table, the only one of her colleagues not settled in a rural or suburban area.

The other day they convened a Zoom piano happy hour. It was a warm afternoon, and everyone but Ms. Listfield was sitting outside and meeting from a yard or porch. Stuyvesant Town’s lovely center green is now closed off to the residents, as are its playgrounds, its co-working space and common patio.

“All that fresh air and space,” Ms. Listfield said of her colleagues’ settings. “It was like looking at a bygone world.”

These “Through the Looking Glass” moments, the sights of so many heretofore forbidden spaces, can make one feel unexpectedly tender even toward the décor of the rich and famous (David Geffen’s much-mocked drone shots of his yacht notwithstanding.)

Last week Sherry Turkle, a professor of social science at M.I.T. and the author, most recently, of “Reclaiming Conversation: The Power of Talk in a Digital Age,” was at home in Boston, pondering the optics of Anderson Cooper’s library, Seth Meyers’s landing and Andrew Lloyd Webber’s vibrant striped curtains, and the photos — were those his parents? — on the composer’s piano.

“This is a moment for people to be in authentic places, and we need that kind of authenticity,” Ms. Turkle said. “People are reaching in. They are not polishing their avatars.”

Even Mr. Cooper’s plush library, with its “Venetian tones,” as she described it, and shelves of rare books, moved her.

“I don’t think I would have cared if I didn’t care about him,” she said. “For me he has been a truth teller. Some kind of screen is down because he’s showing you where he lives. He’s saying, ‘Yeah, I make many millions a year. It’s not a hovel. Everything you thought was right. I do have beautiful taste, and I love beautiful things. This is what nurtures me.’”