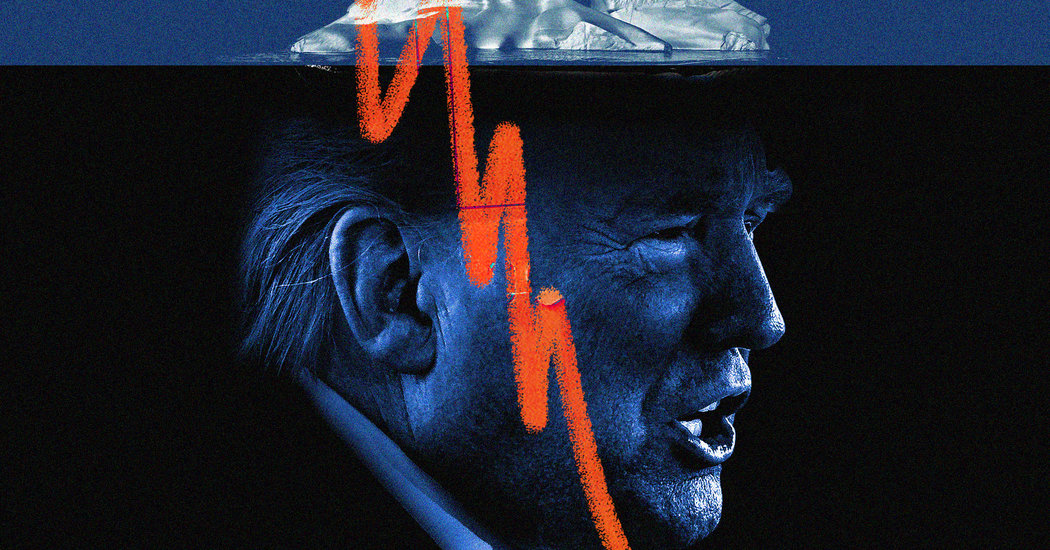 Today’s news quiz: What do these data points have in common?

Jan. 22: President Trump is asked by CNBC: “Are there worries about a pandemic at this point?” Trump answers: “No. Not at all. And we’re, we have it totally under control. It’s one person coming in from China. … It’s — going to be just fine.”

Jan. 31: Moving to counter the spreading coronavirus outbreak, Trump bars entry by most foreign nationals who had recently visited China.

March 9: Trump tweets: “Nothing is shut down, life & the economy go on. At this moment there are 546 confirmed cases of CoronaVirus, with 22 deaths.”

March 13: Fox Business News host Lou Dobbs shows off on his program a chart of the day’s 1,985-point Dow Jones rise. The chart was autographed and sent by Trump, who seemed to suggest that his remarks were responsible for the rise, a day after the same index had dropped a record 2,352 points.

March 16: After the weekend, the Dow suffers another record drop, closing 2,997.10 points lower. Trump did not autograph that fever chart and send it to Dobbs.

Nov. 26, 2018: CNN reports that Trump “dismissed a study produced by his own administration … and more than 300 leading climate scientists, warning of the potentially catastrophic impact of climate change.” Asked why, Trump told reporters, “I don’t believe it.” Asked if he read it, Trump said, “some.”

March 30, 2020: This newspaper reports that Trump completed plans to scrap Obama-era automobile fuel efficiency standards that limited climate-warming tailpipe pollution — a move that will “allow cars on American roads to emit nearly a billion tons more carbon dioxide over the lifetime of the vehicles.”

What’s the common theme? We have a president who is enamored with markets but ignorant of Mother Nature, and we have paid a steep, steep price for that — and will pay an even bigger price when it comes to climate change, if Trump remains in charge.

Early on, Trump clearly spent his days watching the markets and downplaying the virus’s potential for rapid spread. If the markets were doing well for investors, Trump thought it meant that he was doing well containing Mother Nature’s Covid-19 disease — one of many Darwinian engines she employs to mercilessly sort out the weak from the fit.

Trump thought that closing off flights from China was enough to stem this growing epidemic and calm the markets — without the mass testing, surveillance and quarantines of the infected that South Korea, Hong Kong and Singapore employed to great success. You could hear that in the reckless, premature assurances by Kudlow, Kellyanne Conway and Trump himself that the virus had been contained.

Trump even believed he could manipulate markets — which was why he sent Dobbs that autographed chart after HE announced a new policy measure. That for him was the true indicator of his performance against Mother Nature.

It was his deadly mistake.

Mother Nature was not impressed by Trump or his markets. Mother Nature, alas, doesn’t “open” her workday at 9:30 a.m. or close it at 4 p.m. Monday through Friday and then take weekends off. So precisely when Trump was autographing his one-day stock chart to be touted by the knuckleheads at Fox, Mother Nature was silently, relentlessly, mercilessly and exponentially spreading the coronavirus among us.

As Rob Watson, one of my favorite environmental teachers, likes to remind people: “Mother Nature is just chemistry, biology and physics. That’s all she is.”

But that is exactly what Trump did initially with the coronavirus — and is trying to do still with climate change. Yes, we must absolutely focus on combating this virus now. And Trump seems to have finally become properly awed by the power of Mother Nature’s Covid-19, ordering federal distancing guidelines to stay in place until April 30. That is a good thing.

But as we win this battle with the coronavirus and begin to think about the next round of stimulus that we want to inject into the economy — and there will be a next round — it is vital that we keep in mind just how much more destructive climate change could be for all of us, and make sure that we invest in long-term resilience against that as well.

Because there is one huge difference between the coronavirus and climate change: Climate change doesn’t “peak” — and then flatten out and then maybe dissipate or be permanently prevented by vaccine — so normal life resumes.

No, when the Greenland and Antarctic ice melts, it’s gone, and we humans will have to contend with the implications of sea level rise, mass movements of populations and various kinds of extreme weather — wetter wets, hotter hots and drier dries — forever.

There is no herd immunity to climate change. There are only endless impacts on the herd.

Thinking about climate change, even in the middle of this pandemic, is actually useful in a number of ways. For starters, they follow similar natural laws and have common mitigation strategies.

“Both the Corvid-19 epidemic and climate change kick off compounding accelerants that can run your health or climate system completely out of control,” noted Hal Harvey, founder of Energy Innovation. With the coronavirus, “an early sickness becomes a citywide problem, which quickly crosses the country, and morphs into an epidemic. The pandemic is right on its heels. Each early-avoided illness saves thousands of lives down the road.

“It will be exactly the same with climate change,” Harvey continued. “Human-caused warming triggers nature’s compounding forces: If we defrost the tundra in Alaska, Canada and Russia, for example, that thawing soil will emit billions of tons of further carbon dioxide and methane. Only early action can prevent a runaway catastrophe.”

That is why the first rule of scientists for climate change mitigation happens to be the first rule for public health officials of Covid-19 mitigation: Manage the unavoidable so that you can avoid the unmanageable. Trump was slow to manage the unavoidable. Let’s hope that his team’s improved performance will avoid the unmanageable.

A second principle that climate change and pandemics share is: If we don’t take care of the conditions that enable us to prosper, we will not prosper in the end.

China was reckless about importing and mixing “terrestrial wildlife” — supposedly endowed with magical sexual and other powers — with regular meat and seafood in its wet markets. It appears to have spawned both SARS and the new coronavirus. This has to stop.

In America, we built cities on coasts and rivers for navigation and fishing. We farm the Midwest, where the soils, rain and temperatures are ideal. If we continue saturating the atmosphere with carbon, we undermine all the weather, moisture and temperature patterns that allowed America to prosper for so long. If that happens, our society will need endless bailouts to move cities and recover from weather extremes.

Finally, epidemiologists will tell you that climate change may well be the next great engine for the next pandemic — only this virus could easily be carried by mosquitoes, which, because of warmer temperatures in the global north, are able to migrate up from places they’ve never migrated from before.

Now that we have tasted Mother Nature’s wrath in the form of both Covid-19 and climate change, let’s get her on our side. She’s as happy to help as to destroy. Let’s use chemistry, biology and physics, not to mention sun and wind, to create the vaccines and power systems that immunize us from viruses and weather extremes — and not double down on bad habits that will only make us sick again.