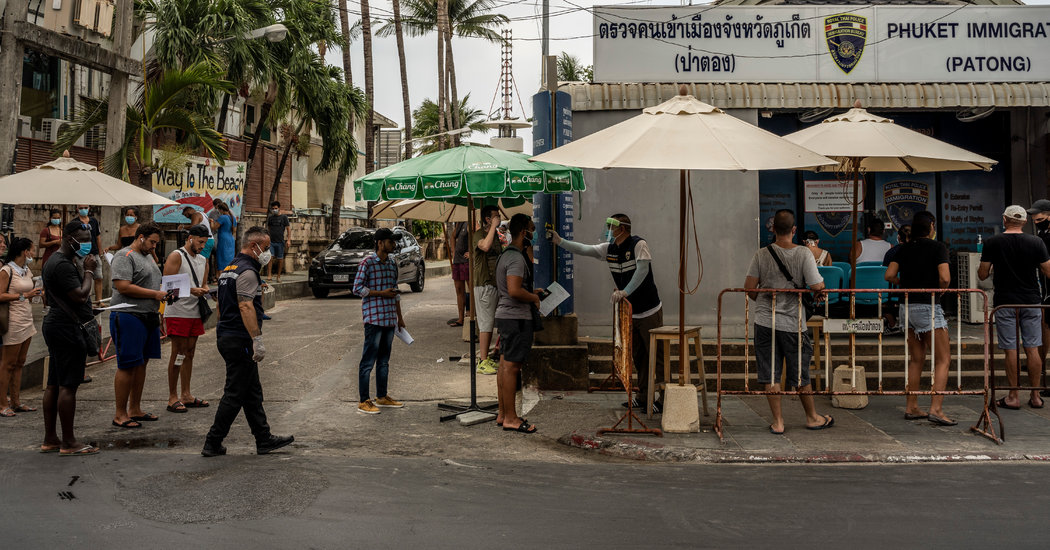 In China, international flights have been cut back so severely that Chinese students abroad wonder when they will be able to get home. In Singapore, recently returned citizens must share their phones’ location data with the authorities each day to prove they are sticking to government-ordered quarantines.

In Taiwan, a man who had traveled to Southeast Asia was fined $33,000 for sneaking out to a club when he was supposed to be on lockdown in his home. In Hong Kong, a 13-year-old girl, who was spotted out at a restaurant wearing a tracking bracelet to monitor those in quarantine, was followed, filmed and subsequently shamed online.

Across Asia, countries and cities that seemed to have brought the coronavirus epidemic under control are suddenly tightening their borders and imposing stricter containment measures, fearful about a wave of new infections imported from elsewhere.

The moves portend a worrisome sign for the United States, Europe and the rest of the world still battling a surging outbreak: Any country’s success with containment could be tenuous, and the world could remain on a kind of indefinite lockdown.

Even when the number of new cases starts to fall, travel barriers and bans in many places may persist until a vaccine or treatment is found. The risk otherwise is that the infection could be reintroduced inside their borders, especially given the prevalence of asymptomatic people who might unknowingly carry the virus with them.

Following a recent uptick in cases tied to international travelers, China, Hong Kong, Singapore and Taiwan barred foreigners from entering altogether in recent days. Japan has barred visitors from most of Europe, and is considering denying entry to travelers from countries including the United States. South Korea imposed stricter controls, requiring incoming foreigners to quarantine in government facilities for 14 days upon arrival.

“Countries have really been struggling to implement their own domestic solutions, and domestic solutions are insufficient for a transnational global health problem,” said Kristi Govella, an assistant professor of Asian studies at the University of Hawaii, Manoa.

“Even countries that have been relatively successful in managing the pandemic are only as safe as the weakest links in the system,” she said, adding that in the absence of cooperation among countries, “closing borders is one of the ways that individual governments can control the situation.”

The virus, which emerged in Asia and spread to the West, is at risk of ricocheting back. Citizens who were worried about outbreaks in Europe and the United States rushed home after finding themselves in the new epicenters of the pandemic.

Almost immediately, countries and cities in Asia started seeing a rise in new cases, often detecting infected passengers at airports as they passed through health screenings. Hong Kong, which had been reporting new daily cases in the single digits, suddenly saw new cases spike as high as 65 in one day. In Japan, where infections have remained relatively controlled, cases started to rise last month in Tokyo as travelers returned from overseas.

To try to stem the influx of infections, governments clamped down on their borders.

South Korea, which has been praised globally for flattening the curve quickly after an early explosive peak in infections, initially required travelers from some countries to quarantine. This week it expanded the list to cover the entire world.

Japan started by having travelers quarantine, but now bars travelers from most of Europe outright. It is discussing more bans, including for travelers from the United States.

China, Hong Kong, Singapore and Taiwan have simply shut their borders to virtually all foreigners.

“We believe that under the current situation of the epidemic, minimizing unnecessary entry and exit activities is a responsible and necessary measure to effectively protect the life, safety and physical health of all Chinese and foreign personnel,” said Liu Haitao, director-general for border control and management of the National Immigration Administration in China.

Even some residents are having a hard time getting home. On mainland China, where leaders are keen to declare the worst of the outbreak that started there over, the new border controls have forced most foreign airlines to cut back to one flight a week. Ticket prices have skyrocketed and bookings are constantly canceled.

Alex Fei, a Chinese student at a university in Canada, has struggled to get back. His flights have been canceled twice — once after Hong Kong banned transfers through the hub, and another time when the airline suspended a direct flight from Vancouver to Shanghai.

Mr. Fei said he might have no choice but to remain in Canada. “Overseas students’ hands are tied for now,” he said.

Citizens who do return to Asia are often put under strict surveillance as they serve out their time in quarantine. In some cases governments are using the tools of criminal justice to enforce them.

Hong Kong, a semiautonomous Chinese city, initially managed to contain its early coronavirus outbreak with swift measures like the closing of schools and government offices and restrictions on travelers from mainland China.

But as students and ex-patriots rushed back from Europe and the United States in March, officials warned that a new wave of imported cases was beginning to strain hospitals. Hong Kong’s leader, Carrie Lam, barred all nonresidents on March 19, and returning residents are now tested upon arrival.

During a 14-day quarantine at home, they wear tracking bracelets, and their movements are monitored by a smartphone app. Ms. Lam said that more than 200,000 people were currently being quarantined at home.

Technology is a key tool for enforcing quarantines. In China, returnees spend 14 days in government-assigned hotels and send their temperatures daily to neighborhood committees on WeChat, a messaging service. In Taiwan, the government uses location tracking on mobile phones and adds some old-fashioned police shoe leather; officers visit people at home if they leave or turn off their phones.

Filia Lim, 50, said the quarantine measures in Singapore were a “headache” because she normally travels extensively for her job in human resources. But she said she was “thankful” that Singapore was monitoring returnees so closely.

“The virus spread mostly because people didn’t realize they have the symptoms, or for some they blatantly ignored those symptoms and they interacted with a lot of people despite advice by government to self-isolate themselves,” she said.

Punishment for breaking the rules of quarantine can be stiff. A 53-year-old Singaporean who breached the order had his passport invalidated, the immigration authorities said Sunday.

Japan officially says those who break quarantine can be imprisoned for up to six months or fined as much as 500,000 yen, about $4,600.

But the Japanese government relies on trust that those in quarantine stay cloistered. Upon returning from countries on the banned list, residents sign a pledge stating that they will remain in one place for 14 days and stay off public transit. If they go out for food, they are told to wear a mask and “be quick.”

South Korea has yet to bar entrants from anywhere but the Hubei region of China. Critics say that simply quarantining foreigners may inadvertently put more stress on the medical system.

“Some say that there are people abroad who think they should come to Korea to be tested and treated,” said Dr. Park Jong-hyuk, a family medicine specialist and spokesman for the Korean Medical Association.

Dr. Park has called for a total entry ban on foreigners.

“It is time to make efforts to protect one another on a global level by practicing international social distancing,” he said.

In the immediate term, when governments are still scrambling to protect their citizens, such measures make sense, experts say. But the longer it goes on, the more likely it could do sustained damage to the global economy and the collective psyche.

“Although the first priority should be on definitely trying to control the virus,” said Karen Eggleston, director of the Asia health policy program at the Shorenstein Asia-Pacific Research Center at Stanford University, “one has to think about those very large costs, and as the crisis is prolonged, those costs can definitely mount.”

Sean Sierra, 30, a petty officer in the United States Navy stationed at Yokosuka Naval Base in Japan, said he did not see an end in sight. After a recent posting to a ship based in Singapore, he was required to quarantine at home in Japan for 14 days when he returned.

Although he has completed his stint in isolation, the entire base is now sheltering in place. “We’re going to be stuck here for a bit,” said Petty Officer Sierra. He said that his mother-in-law was scheduled to visit in two weeks but that the quarantine “puts a damper on any plans.”

Reporting was contributed by Su-hyun Lee from Seoul, Hisako Ueno from Tokyo, and Tiffany May and Elaine Yu from Hong Kong. Claire Fu contributed research from Beijing.